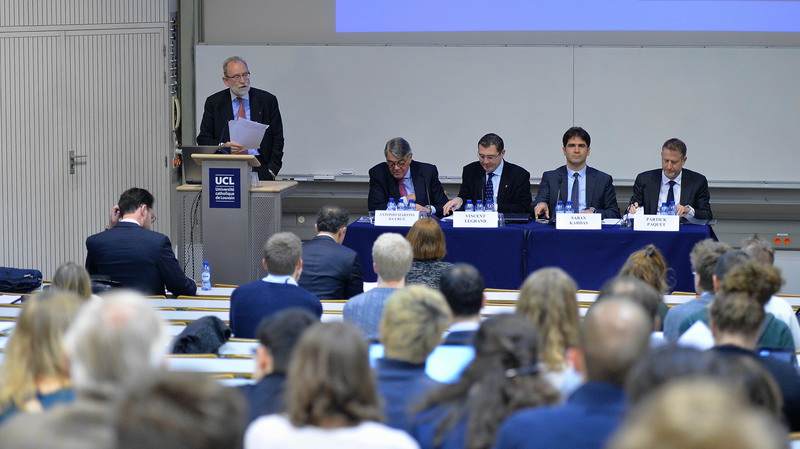 by daily sabah
Nov 18, 2015 12:00 am
During the conference "Stepping up EU-Turkey Cooperation on Support of Refugees and Migration Management and on CounterTerrorism," which was jointly organized by the Center for Middle Eastern Strategic Studies (ORSAM), Catholic University of Louvain (UCL) and International Policy and Leadership Institute (IPLI) held on Monday in Leuven, Belgium, ORSAM director Şaban Kardaş said: "There is insufficient security in the Middle East, especially after the Arab Spring. The actors were unsuccessful to create solutions. Being economically and politically underdeveloped has a roll-back impact on the region."

Kardaş made evaluations about the Middle East and North Africa during the conference, and mentioned ORSAM projects throughout these regions. He stressed the significance of structural changes in the region, and said: "The status quo in this region has created several international security problems. They are not usual problems. Attacks in Ankara, Beirut and conflicts in Syria, Iraq, and attack on the Russian airliner are not ordinary problems."

Kardaş also said that there is no such legal control over borders in the Middle East. "Although borders should separate one country from another, especially the borders of Libya, Iraq and Syria are losing meaning and function. We can see that the countries lost control and sovereignty within their borders," he said. Kardaş also said that local identities have gained more significance over national identities in countries like Iraq, Lebanon and Syria."

Along with Kardaş, Seval Güzelkılınç, the international projects manager of the Turkish Red Crescent, Haldun Yalçınkaya, the coordinator for the security studies program at ORSAM, and former Portugal Foreign Minister of Antonio Martins da Cruz and Patrick Paquet, the vice chairman of the Turkey unit at Directorate-General for Neighborhood and Enlargement Negotiations, participated in several of the conference. Da Cruz said there will be a change in relationship between Turkey and the 28 members of the EU.

He drew attention to the importance of relations between Turkey and the EU for refugee and security problems and said: "Confidence and stability should be protected in Europe, and so cooperation with Turkey is important for the security of the region. This is a turning point for Turkey for relationships with Europe," he added. Paquet said that due to the refugee problem, the relationship between the EU and Turkey has gained further importance. According to him, mutual confidence is important for a possible refugee summit.
Last Update: Nov 18, 2015 11:17 am