Ankara looks to strengthen ties with EU during Dutch presidency 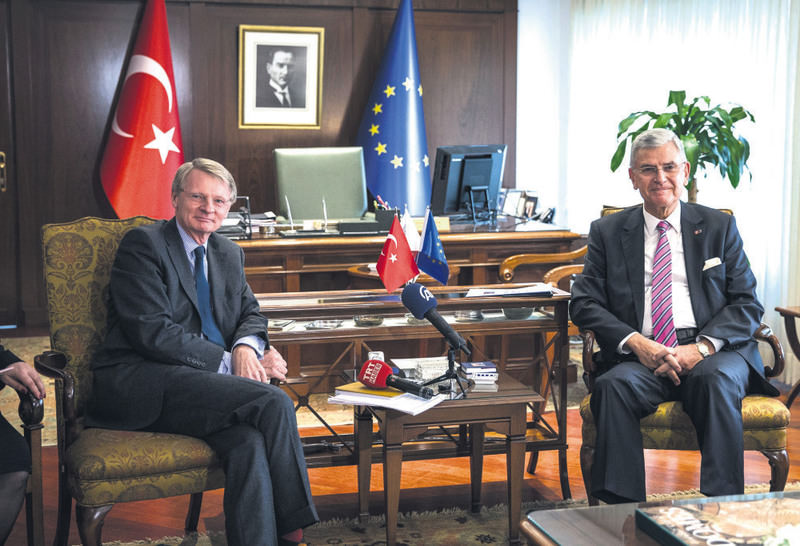 Ankara is hopeful that its EU accession process will accelerate during the Netherlands' term in the European Council presidency. The Dutch envoy to Ankara says the EU-Turkey summit held in Brussels last November restored trust and brought fresh impetus to relations

Dutch ambassador Kees Cornelis van Rij spoke to officials in Ankara on Tuesday evening at an event organized by the Dutch Embassy to commence the start of the Netherlands' term in presidency over the European Council, which they will hold for the first half of 2016. Cornelis van Rij said that the Dutch presidency is significant for the credibility of the EU enlargement process and that the Netherlands anticipates the speeding up of Turkey's accession process. "The EU-Turkey summit held in Brussels last November restored trust and brought fresh impetus to relations between the two countries," the newly appointed ambassador said.

Turkey's EU negotiation process began with the previous Dutch presidency in 2004, with officials now planning to open five additional policy chapters in the first half of 2016. The Netherlands' work program focuses on four key areas, including migration, international security, sound finances and a productive Europe. These areas will focus on innovation, job creation and climate and energy policies that focus on the future. "We welcome the European Commission's commitment to completion of preparatory efforts in the first quarter of 2016 to open additional chapters, including the crucial Chapter 23 and 24 on justice and fundamental rights," van Rij said.

Ambassador Hansjörg Haber, head of the European Union Delegation to Turkey, emphasized in his speech that Ankara and the EU are committed to meeting deadlines and succeeding in the process with emphasis on the implementation of standards and criteria rather than deadlines. "Our plan is sincere, and so far [we are] convinced that the timeline we have agreed on can actually be met. What we need under these conditions is very close and trustful cooperation in both directions," he said.

"We need to convince our societies and the public that we are looking to our core values to find ways to improve the lives of our citizens. In this regard, the fact that Turkey is hosting more than 2 million refugees, most of them from neighboring war-torn Syria, has won the respect and admiration necessary for the assembling of this crisis. We want to convince the Turkish public that the EU stands side-by-side with Turkey in this humanitarian dilemma," Haber said.

EU Minister and Chief Negotiator Volkan Bozkır also said that the EU and Turkey face challenges such as fighting economic difficulties, fighting illegal immigration and terrorism threats, stressing that due to these challenges Turkey and the EU need each other now more than ever. "I think that Turkey is perhaps the only country that can contribute to the European or Western world's efforts to fight these major enemies and dangers we face," Bozkır said.

Underlining that their government is aiming to achieve reforms in various fields, including EU-related reforms, Bozkır said that the government has announced more than 250 reform packages and reiterated its determination to achieve these goals. "We take these steps for the European Union to make important progress in many aspects in Turkey. Making progress according to the chapters also affects the daily lives of Turkish citizens. Of course, what we will be able to achieve in terms of reform will be one of the most important elements to potentially change the negative concept of Turkey in the Western world," Bozkır said.
Last Update: Jan 07, 2016 9:03 am
RELATED TOPICS