EU proposes to remove visas for Turks by June, give extra € 3BN for Syrian refugees 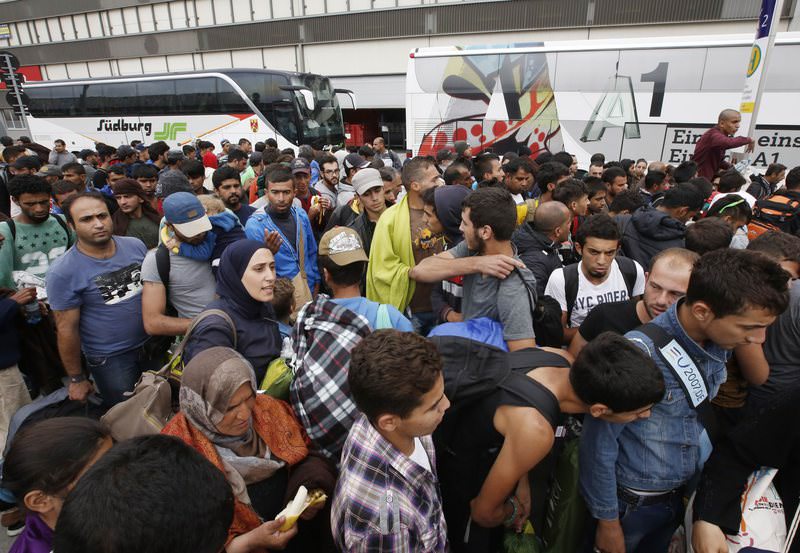 The EU draft proposal released at the Turkey-EU summit said the 28- nation bloc would double the amount of money it had offered to Ankara help Syrian refugees and to take in Syrians directly from Turkey. It also said the EU would ease visa requirements for Turks who want to visit the Schengen area by the end of June

Prime Minister Ahmet Davutoğlu made a new proposal for tackling the migrant and refugee crisis at the Turkey-EU summit in Brussels on Monday, leading EU leaders to extend the meeting.

"There is a new proposal. We are trying to pave the way to solve this process, that's why this is a new proposal," Davutoğlu's spokesman told reporters. He refused to give details of the new offer, but said: "We are not here just to talk about migrants. Of course Turkey's EU accession process is an issue for us here. Our partners have good intentions and we have good intentions and we all want to solve this."

The summit was continuing and EU leaders were due to meet Davutoglu again for dinner later on Monday. EU leaders were divided into two as one party backs the draft proposal, while the others oppose. These two parties cannot agree on a common draft to be proposed to Turkey.

"Several countries really like the idea but cannot accept a deal tonight because of the very short preparation time. They will welcome the higher ambition but they can't nail down all the points today," an EU official told Reuters.

"There are some clarifications needed. We will work on it intensively in the coming days," he added.

Visa free travel to the EU

According to reports, the EU's draft proposal includes an extra 3 billion euros ($3.3 billion) in funds to help the refugees in Turkey and the lifting of the visa restrictions on Turkish citizens by the end of June. In return, Turkey will take all irregular migrants from Greece, including Syrians, while the EU will then admit directly from Turkey one Syrian refugee for every Syrian readmitted to Turkey from the Greek islands. EU leaders called the summit to follow up on a deal signed with Ankara in November under which Ankara agreed to cut the flow of migrants to Europe and take back more deportees in exchange. The EU also agreed to open new chapters in Turkey's long-stalled bid to join the EU.

Speaking before the summit, Davutoğlu said such a challenge can only be solved through solidarity and cooperation of the EU and Turkey.

He said: ''We have many challenges in front of us. The only way to respond to these challenges is solidarity. At the end of the day our continent is all together.''

''Turkey is ready to work with the EU and Turkey is ready to be member of the EU as well,'' Davutoğlu said. ''Today I hope this summit, which will not focus on only irregular migration, but also the Turkish accession process to the EU, will be a success story and a turning point in our relations,'' he added.

A spokesman for Davutoğlu said that Turkey is ready to do all it can in conjunction with the European Union to deal with the crisis, but complete elimination of crossings over the Aegean Sea is not possible.

"Everybody knows what the Aegean looks like and it is not possible for any country to stop all migrants completely. But that doesn't mean we won't do everything we can," the spokesman told Reuters, adding that expecting everything from Turkey is not fair.

Germany, among the 28-nation bloc, has been the strongest voice for cooperation with Turkey and considers it vital for saving the Schengen zone from danger.

German Chancellor Angela Merkel says she expects "difficult negotiations" at the summit along with being hopeful about moving forward.

She said her aim is to reduce the number of migrants entering illegally "and not just for a few countries, but for all countries, that means for Greece, too," and added that there needs to be a "sustainable solution" that involves protecting the EU's external borders.

Speaking at an International Women's Day meeting in Ankara, President Recep Tayyip Erdoğan said that he is hopeful about Davutoğlu's return with promised monetary aid from the summit and noted that four months have passed since the EU made the pledge.

Erdoğan said it was not Turkey's fault that migrants were using its coast as a springboard to reach the EU.

"Look, they say on the other side, 'don't let refugees come in.' Okay. But it is not us that are sending them. They are coming from the sea and a lot of them are unfortunately dying," he said, and added that the Coast Guard has rescued close to 100,000 migrants from the sea and mocked the efforts of Turkey's neighbors trying to save them.

Amid the negotiations, the U.K. has demanded Turkey receive much more support for a solution, suggesting that more money needs to be granted. Speaking to the BBC on Monday, British Defense Secretary Michael Fallon said that Prime Minister David Cameron will urge European leaders to make good on funds to help Ankara deal with the refugee crisis.

Fallon said Europe has promised the money and the Coast Guard "needs to be strengthened," and they need to do as much as they can to help Turkey.

Speaking to FranceInter radio, French Foreign Minister Jean-Marc Ayrault said Europe should reach a deal with Turkey on how to tackle the ongoing migrant and refugee crisis. He said the EU must review its policy on open borders, which was not designed for this kind of crisis.

He said this would entail protecting the EU's outer borders, dividing up newcomers who have the right to asylum, helping Greece and reaching an accord with Turkey.
Last Update: Mar 07, 2016 10:21 pm
RELATED TOPICS