Refugee crisis can be solved only via solidarity among EU’s 28 members states, Turkey: PM Davutoğlu 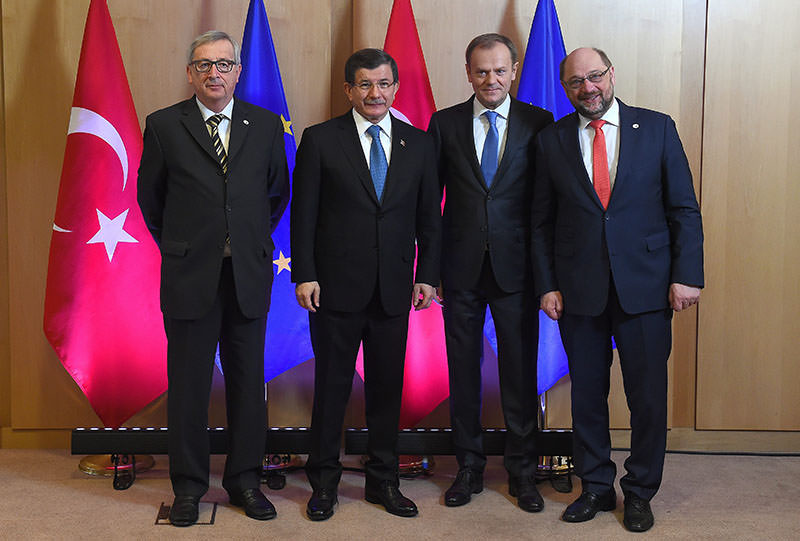 (L-R) Jean-Claude Juncker, Ahmet Davutou011flu, Donald Tusk and Martin Schulz pose for photos ahead of summit of EU leaders with Turkey in Brussels, 07 March 2016 (EPA)
by Compiled from Wire Services Mar 07, 2016 12:00 am
The challenges facing Europe in terms of the refugee crisis can be solved through cooperation among the 28 member states and Turkey, Prime Minister Ahmet Davutoğlu said on Monday.

Speaking at the European Parliament in Brussels, Davutoğlu said: ''We have many challenges in front of us. The only way to respond to these challenges is solidarity. At the end of the day our continent is all together.''

Davutoglu is set to meet with the 28 EU heads of government in Brussels on Monday to discuss ways to solve the worst refugee and migrant crisis facing the Europe since World War II.

The EU has pledged to provide 3 billion euros [$3.2 billion] in aid for refugees hosted in Turkey, visa liberalization for Turkish citizens and speeding up of the candidate country's EU accession process.

In exchange, the EU is expecting Turkey, which hosts the largest number of Syrian refugees in the world, to stop migrants and refugees from entering Europe via its neighbor Greece.

''Today I hope this summit, which will not focus only irregular migration but also the Turkish accession process to the EU, will be a success story and a turning point in our relations,'' he added.

Meanwhile, in a separate occasion, a spokesman for PM Davutoğlu said that Turkey is ready to do all it can in conjunction with the European Union to tackle illegal migration but will not be able to completely eliminate crossings over the Aegean sea.

"Everybody knows what the Aegean looks like and it is not possible for any country to stop all migrants to zero. But that doesn't mean we won't do everything we can," the spokesman told Reuters on the sidelines of an EU-Turkey summit in Brussels.

"This is our common problem, not the EU's, not a Greek problem. (Expecting) everything from Turkey is not fair, we are here for burden sharing, and we sincerely believe that today bolder steps will be taken."

The spokesman described a meeting between Davutoğlu, Dutch Prime Minister Mark Rutte and German Chancellor Angela Merkel on the eve of the summit as "very fruitful". He declined to comment on the details of readmission agreements being discussed.
Last Update: Mar 07, 2016 2:15 pm
RELATED TOPICS