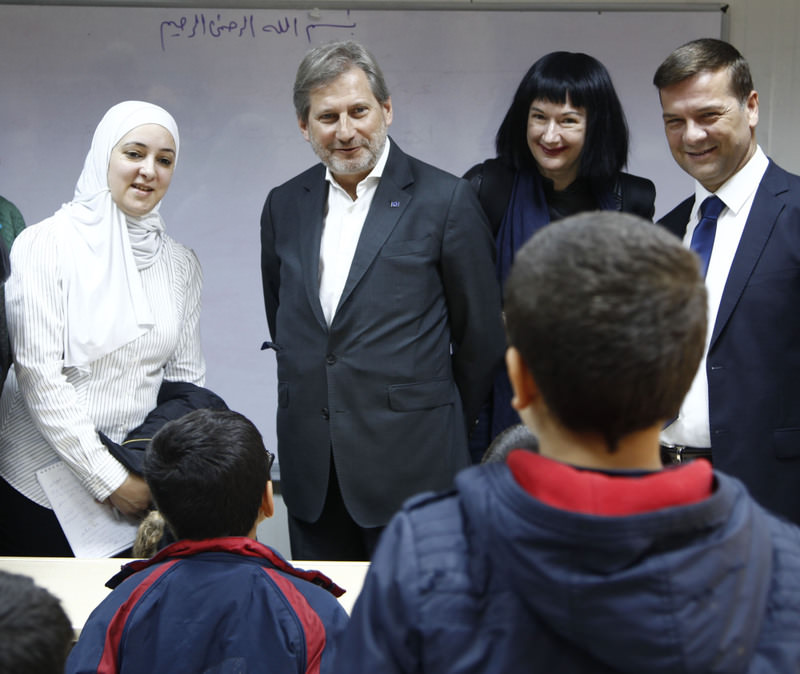 Turkey is the most reliable neighbor of the EU and visa liberalization for Turkish citizens will have a positive impact on the economy once it makes it easier for business people to travel, European Commissioner for European Neighborhood Policy Enlargement Negotiations Johannes Hahn told Daily Sabah

With the European Union (EU) and Turkey sitting down at a summit in Belgium to address the refugee crisis, the European Commissioner for European Neighborhood Policy Enlargement Negotiations Johannes Hahn gave an exclusive interview to Daily Sabah during his visit to Turkey's southeastern province of Gaziantep on Thursday. Commenting on the purpose of his visit to Gaziantep, top EU official Hahn announced that the first installment of 55 million euros ($60.6 million) from the EU's promised 3 billion euros is to be used to finance food assistance for refugees. While Hahn underlined that Turkey is a key strategic partner for the EU, he described the summit in Belgium as steps forward. He emphasized that he is optimistic that the EU and Turkey can achieve their goals regarding the refugee crisis.

DS: What was the purpose of your visit to the southeastern provinces of Turkey, what were your impressions from your visit?

The purpose of this visit here in this region is an opportunity to demonstrate the EU's contribution, also to show how important it is for us to support Turkey in its efforts to keep refugees in the region, and this is part of our agreement with Turkey within the joint action plan. Part of this agreement was the establishment of Turkish refugee facilities, which are financed by the EU overall budget, up to 3 billion euros. The first installment of 55 million was decided upon on Saturday, and it will be primarily used to finance the food program. So money will be provided to the world food program, but another main focus of our financial contribution is education and health treatment. Already in Autumn last year we provided from another source for the student trust fund 365 million euros, and that money was primarily spent on education to increase school attendance. Thus around 200,000 kids could attend school this school year. Already 50,000 people have received this food card, which allows refugees to receive food for six months, and with this first installment, we can provide food for around 300,000 people for six months. So I believe this is something extremely important which should help Turkey to cope with this particular problem.

DS: As you know, the Turkish government has already sent a needs assessment list to EU officials regarding the refugee crisis. However, we understand that you have given the money to international organization. Is there disagreement on the projects or needs list between Turkey and the EU?

We are interested because we need clarity about the needs. In that respect we have to collaborate, and we have asked Turkish authorities for the refugees' needs; sharing up-to-date data, information, facts and figures so we can make our own needs assessment as well. But the 3 billion euros is managed by the EU directly, and of course Turkish authorities are included in the advisory report where we discuss the areas targeted, and the ways and methods of the investments. However, it is primarily financed and managed by the EU but we often use international organizations like the UNICEF, World Food Program and the UNCHR because they have their infrastructure, people and everything else already there. It is also a question of time of speed, and therefore we use existing structures.

We have three main areas that are important for us, which include education, health treatment and food security.

DS: As Turkey and the EU will hold an important summit on Monday, what are your expectations and what is included in your agenda?In my understanding, the summit is a kind of a step-taking meeting when it comes to the implementation of the joint action plan between the EU and Turkey, which we agreed upon last autumn, and it is now about the implementation. And what I have presented today is one very important part of what Europe has promised, this 3-billion-euro Turkish refugee facility in order to help and assist Turkey. Now we can demonstrate everything is in place which we can deliver, provided we are clear about the needs. Of course this has to be in return for reduction of illegal migration to Europe, but here I am very optimistic that we can achieve this goal very soon, as I think both sides have an interest. Once again, it is important to stress that Turkey is a key strategic partner for Europe, and vice versa, Europe is a very important key strategic partner for Turkey. It is our most reliable neighbor, therefore cooperation is extremely important. It is not only about refugees, but also economic cooperation, that is why the upgrading of customs is one of the elements. Visa liberalization is something else, which would also have an impact on the economy if it is easier for business people to travel. Of course accession is something else, where for instance the openings of chapters such as 23, 24, related to fundamentals such as the treasury etc., would from our point of view certainly contribute to further development of Turkish society.

DS: There has recently been an agreement on NATO involvement to tackle illegal migration, how successful do you think that will be?

I think it is a smart move to include Turkey and Greece, which are NATO members, as well as for Germany and others to hold joint exercises. It is an unprecedented challenge we are facing, all of us including Turkey, Greece and the entirety of Europe. Now the focus is on the Aegean, but for us as Europeans, we are fully aware that we are facing a huge number of refugee and internally-displaced people around Europe, as we are talking about at least 20 million people. You can take the situation in Libya, Palestine but also the Ukraine, so there are a lot of people who are either refugees in different countries, or who are internally displaced people. Therefore we have to find ways and means how to cope with this particular challenge, and cooperation with our neighbors is important. I have just made a review of European Union neighborhood policy, which I presented in October last year. Our goal is to achieve stability in our neighborhood. All of our measures are targeted at guaranteeing, achieving and maintaining stability in our region.

DS: Vice President of the Bundestag Johannes Singhammer recently told Passauer Neue Presse that lifting the EU's visa requirements for Turkish citizens would lead to a "new, uncountable influx" of refugees fleeing war and violence. Do you agree with this statement, and how would you comment on that?

We have evidence from other countries where we saw visa liberalization, and I don't see in the medium or long-term any negative consequences. Quite the opposite, it allows free travelling provided measures, including security measures, biometric passports and things like that. That is why its not something where you can say let's have visa liberalization tomorrow or the day after tomorrow, but certain conditions must be fulfilled, it must be for instance possible that Turkish authorities can exchange data and information with European institutions like Europol and Interpol, et cetera. It is also about the necessary independence of the Turkish authorities to interact with European institutions, and this has to be established. This is something which cannot be done in one day or after, but if all this elements are in place, I have no concerns and that is why we are doing this.

DS: The European Union is receiving criticism from the Turkish public because they say that the negotiations between the EU and Turkey are only about the refugee issue, while ignoring human rights matters such as journalists getting arrested. How would you comment on that?

I can only say that I as the responsible Commissioner presented the progress report last October, and if you look into the substance of the report it is not really well received in the country. That is why I am always saying if you have negotiations we of course have to address fundamentals, all these elements, which are particular concern for parts of Turkish society, and this will be done. The best leverage are the accession negotiations.
Last Update: Mar 07, 2016 9:21 am
RELATED TOPICS