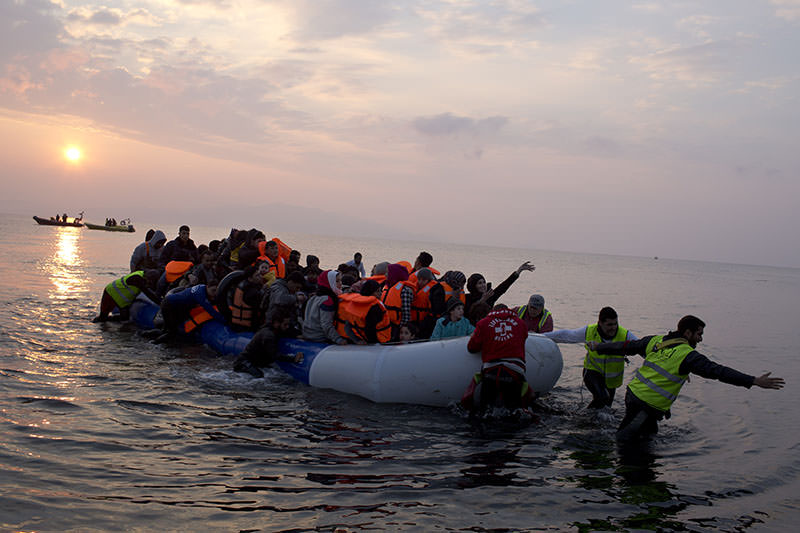 Volunteers help migrants on a dingy as they arrive at the shore of the northeastern Greek island of Lesbos, after crossing the Aegean sea from Turkey March 20, 2016 (AP)
by Daily Sabah Apr 03, 2016 12:00 am

On Monday, Turkey will begin admitting illegal migrants trying to reach the European Union borders via the Aegean after March 20, Interior Minister Efkan Ala said on Saturday.

"The readmission agreement will start from April 4," Ala said, adding that only those who left Turkey after March 20 will be eligible to be admitted. "I mean, not those who had left before [March 20]," he further added.

"Those who are from countries other than Syria, [namely] Afghanistan, Pakistan, Iraq, will be transferred to refoulement centers from the minute we admit them from Greek islands," Ala said.

After migrants are transferred to these centers, Turkish authorities will contact their respective countries, and they will be returned to their country of origin in line with readmission agreements signed with the aforementioned countries, he explained.

According to the plan, irregular migrants will be determined by Irregular Migration Monitoring Units composed of immigration and liaison officers and carried out via checkpoints mainly on the islands of Lesvos, Chios, Samos, Leros and Kos.

Irregular migrants that have crossed to Greek islands from Turkey will be evacuated from Greek territory and sent to Turkey to be readmitted into the country. This is when the refoulment process kicks in; for every Syrian refugee received from the Greek islands, Turkey will send a Syrian asylum seeker to Europe to find a home and be settled in the EU. The transfer and the extradition of the refugees will be funded by the EU, and the whole progress will be reviewed by both sides on a monthly basis.

Turkey on Sunday vigorously denied claims that Syrian refugees are being forcibly returned to their country. In a statement, the Foreign Ministry said that claims by Amnesty International about the repatriation of Syrian refugees that were repeated by various press organs in recent days are wholly untrue.

It said that Turkey has been applying an open-door policy for Syrians fleeing the civil war for more than five years and that the country meticulously respects the principle of non-refoulement under its international obligations.

Non-refoulement is an international legal principle that forbids the rendering of victims of persecution to their persecutors. The statement added that Turkey hosts at least 2.7 million Syrians and provides 270,000 Syrians in 26 provisional accommodation centers with food, health, and education services as well as psychological support, vocational education, and social activities.

Meanwhile, Syrians living outside these centers benefit from health and education services free of charge, said the ministry. In addition, this January Turkey cleared the way for Syrians to get work permits. "Turkey is the largest refugee-hosting country in the world, and this obviously shows that Turkey respects the non-refoulement principle meticulously," said the statement, adding Syrians are neither encouraged nor obliged to return.

Turkey is determined to provide Syrians fleeing violence and instability in their country with security, said the ministry. The statement said that despite Turkey mobilizing all efforts for Syrian refugees, it is a source of regret that countries closing their borders to not to accept refugees are carrying this news intensely to their own public opinion