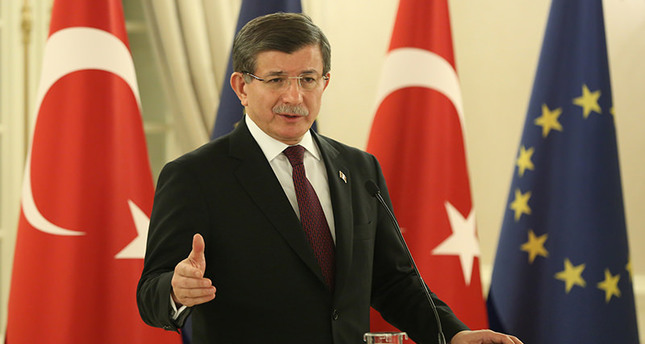 Turkey has the only power to have the final say regarding its borders, Prime Minister Ahmet Davutoğlu said late Monday before his departure to Strasbourg, France.

Addressing journalists at Ankara's Esenboğa Airport, Davutoğlu touched upon the recent meeting held between U.S. President Barack Obama and Russian President Vladimir Putin regarding the closure of Turkey-Syria border and said that it is a national sovereignty issue.

"Turkey's borders only concern Turkey" Davutoğlu said and added that Turkey has the sole authority to make final decisions regarding its borders.

He added that the borders have been open for humanitarian purposes and the world should thank Turkey rather than call it to account.

He also warned that Turkey could not be expected to stick to its commitments if it was not granted visa-free travel in the EU by June.

Under a deal with the EU late last year, Turkey agreed to take back refugees from Greece while Turkish nationals were promised a relaxation of the visa regime in Europe.

"If it is not carried out, no-one would expect Turkey to adhere its commitments," he said in reference to the deal, which also promised a financial package for Turkey to support refugees and fast-tracked EU accession.

The agreement allows for the return of "irregular migrants" from Greece to Turkey in exchange for Syrian refugees to be relocated within the EU. The resettlement program began earlier this month.