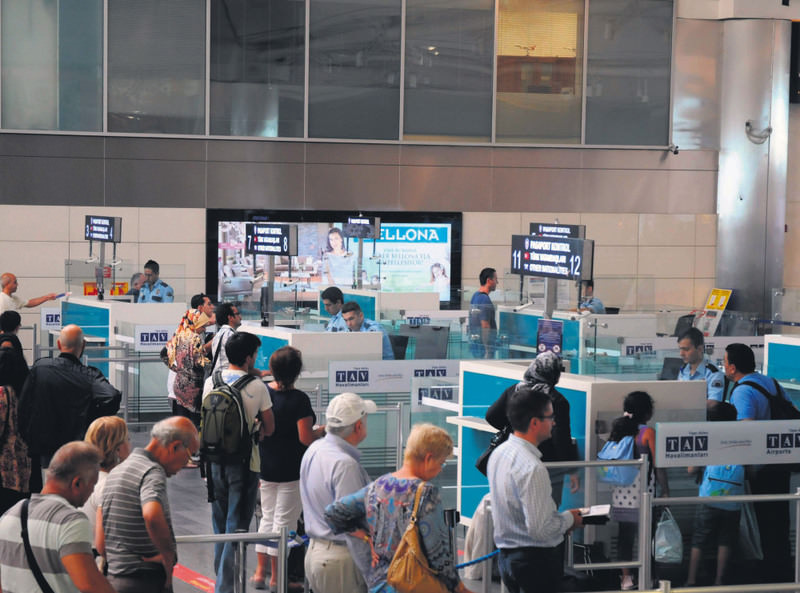 Amid speculations about some European Union member states readying to submit a proposal to bar Turkish citizens from entering the Schengen zone if the number becomes too many after possible visa liberalization, EU Deputy Minister Ali Şahin told Daily Sabah yesterday that Ankara will take nothing into consideration other than the agreed deal. "They have been testing the waters over the course of last two or three months. It is by no means acceptable for us to accept such proposals that are not in the deal reached between Turkey and the EU," Şahin said, adding that Ankara hardly understands why some member states have such expectations.

Calling such a proposal for quotas "ill-intentioned," Şahin said Parliament is working around the clock to pass the necessary bills to meet all the EU benchmarks for visa liberalization. "Everything will be ready before May 4. We will have no drawbacks then," he added. He also assured yesterday that legislation to meet the European Union criteria to lift the Schengen zone visa requirement is expected to be complete on Monday. Asserting that EU citizens may also want to flock to Turkey once visa requirements are lifted between member states and Turkey, Şahin said: "We also hear concerns from our citizens. I was in Bingöl and a citizen approached me and said he was concerned about Europeans coming to Turkey." "Should we also put forward preconditions?" Şahin asked.

Speaking live on television on Thursday, EU Minister and Chief Negotiator Volkan Bozkır said that there are no obstacles on the way to visa liberalization and that both sides have been fulfilling their responsibilities under the EU-Turkey migration deal.

He also said that the commission will publish a report on May 4.

"If all goes well, we expect a decision recommending the lifting of visa requirements on Tuesday" he said, and added that he expects visa liberalization to go into effect by June.

Bozkır warned once again that the readmission deal with the EU will fail if visa liberalization is not realized.

In April, Turkey began admitting illegal migrants who had reached the Greek islands from Turkey after March 20.

Under the EU-Turkey deal, Ankara will take back all migrants and refugees, including Syrians, who enter Greece illegally in return for the EU taking in Syrian refugees directly from Turkey on a one-to-one basis.

Two sets of deportations of 325 migrants from Greece took place three weeks ago and another 49 were sent back on Tuesday.

The deal has already sharply reduced the number of people crossing from Turkey to Greece. Greek Prime Minister Alexis Tsipras as well as a European Commission report said the implementation of last month's agreement to curb migration had allowed for progress. Migrant flows to Greece decreased markedly in recent months, Tsipras said on Wednesday last week, defending his government's support for the deal.

"A few months ago we had flows of 3,000 to 4,000 daily to our islands. ... Today, the flows are about 50 to 60 daily," Tsipras told Greek parliament during a debate on security.Turkey received a plane of Syrian migrants from Europe on Wednesday, days after the beginning of the implementation of an agreement between Turkey and the European Union for the resettlement of migrants.

Twelve migrants, including two children and four women, were flown from the Greek island of Lesbos, in the company of five Turkish police officers and officers from Frontex, the EU's border control agency. They will be accommodated in refugee camps near Adana, a province in southern Turkey where more than 10,000 Syrians reside in a refugee camp.

Frontex spokesman Ewa Moncure said the refugees had not applied for asylum in Greece and had agreed to return to Turkey.

Facing an unprecedented flow of refugees, not seen since World War II, Europe has turned to Turkey to stem the flow of migrants seeking to reach the continent through Greece, the nearest gateway.

Turkish coasts lie in close proximity to Greece's Aegean islands, which are crowded with migrants, especially Syrians who traveled before the EU-Turkey deal was signed on March 18.

Under the deal, Turkey will readmit migrants who do not apply for asylum in Greece, or whose asylum requests were turned down by Greek authorities. The agreement covers only those who traveled from Turkey to Greece illegally since March 20.

SOME KEY BILLS DELAYED ın parlıament due to brawlLate-night fisticuffs in Parliament between opposition and AK Party lawmakers about the conflict in the southeast forced a delay on legislation crucial to the EU migration deal.

The fistfights and shoving matches late Wednesday led the speaker to adjourn the chamber until Monday.

The fighting broke out, according to broadcaster NTV, after Ferhat Encü, a deputy from the pro-Kurdish Peoples' Democratic Party (HDP), accused the government of killing civilians in the southeast, in what he called a "massacre."

Punches were then thrown between Encü and members of the AK Party, who rejected the accusations.
Last Update: February 02, 2020 10:11