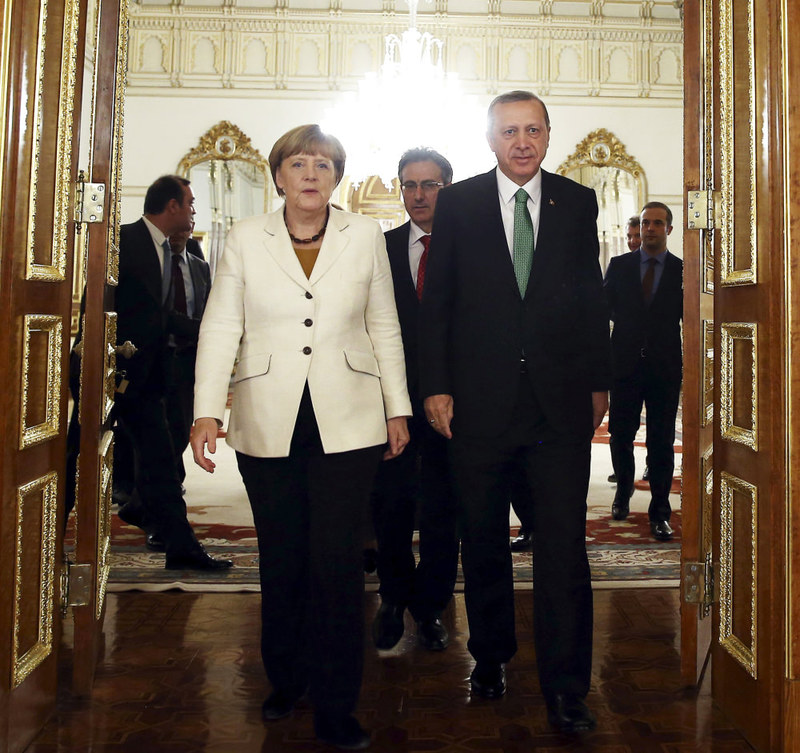 As repercussions of the European Commission report that recommends lifting visa requirements for Turkish citizens continue in Europe, German Chancellor Merkel hailed Turkey's efforts while the EP's Turkey rapporteur Piri gave a slight chance for visa liberalization to go ahead

After the European Commission took the first step toward visa liberalization for Turkish nationals on Wednesday, German Chancellor Angela Merkel expressed her satisfaction with the decision while European Parliament's controversial Turkey rapporteur Kati Piri said visa-free travel for Turks is unlikely in the near future.

Merkel said she is hopeful Ankara will fulfill the rest of the benchmarks needed for visa liberalization. Even though many Turkish officials have asserted that Ankara has completed all 72 benchmarks, the European Commission's report pointed to five remaining, unmet benchmarks. Reflecting on them, Piri contended that Turkey will not be able to meet them until July.

"I believe Turkey has a realistic opportunity to fulfill the remaining points because of progresses it has made on other issues," Merkel said.

Piri, however, said: "Turkey's current fight-against-terror laws are an obstacle in the way of democratization."

According to a press release from the European Commission after the decision, Turkey will need to "revise the legislation and practices on terrorism in line with European standards, notably by better aligning the definition of terrorism in order to narrow the scope of the definition and by introducing a criterion of proportionality."

European Commission First Vice President Frans Timmermans said on Wednesday that Turkey has made "impressive progress" recently regarding work to meet all benchmarks. "There is still work to be done as a matter of urgency, but if Turkey sustains the progress made, they can meet the remaining benchmarks," he added.

Ankara has harshly criticized Piri for her alleged biased stance on the country. Publishing her latest progress report on Turkey last month, Piri criticized Turkey on many issues.

European Parliament approved the 2015 Turkey progress report for the EU membership process on April 14, passing the report with 375 votes in favor to 133 opposed and 87 abstentions.

Commenting on Piri's report, Bozkır had said: "The European Parliament report reflects [its] views regarding European Commission progress reports about EU member countries and Turkey. Last year, we said we would reject the report if it included elements that are not acceptable for us."

Bozkır had previously railed at Piri. "She has lost her neutrality about Turkey's issues. It will be highly difficult for her to find counterparts to converse with in Turkey outside of the organizations she visited in Diyarbakır," Bozkır had said after her controversial visit to southeastern Turkey.

PERIOD AHEAD FOR TURKEY, EU AFTER EC REPORT

The European Commission is expected to hold bilateral talks with Turkish authorities in the very near future and monitor late-passed bills as soon as possible. "The Commission acknowledges the good progress made by the Turkish authorities so far and encourages them to urgently step up these efforts to meet all requirements in order to obtain visa liberalization by the end of June," a press release from the European Commission said.

The proposal will still have to be approved by European Parliament and the Council of the European Union.

European Parliament's Civil Freedoms, Justice and Internal Affairs Committees will read the proposal and then it will be voted on in the parliament. A simple majority will be enough to approve the proposal.

Once the parliament approves the proposal, the Council of the European Union will discuss it. In order to be approved, 55 percent of members and at least 16 ministers of the 28 member states need to support it. In addition, the populations of countries that approve the proposal need to make up at least 65 percent of the entire EU population.

If these conditions are met in the Council of the EU as well, Turkish citizens will be able to travel visa-free to the EU's Schengen zone from July 1.

FIVE BENCHMARKS STILL TO BE MET, ACCORDING TO EU

A press release by the European Commission outlines the five benchmarks that Ankara still needs to meet before June 2016:

adopting measures to prevent corruption foreseen by the road map, i.e., ensuring an effective follow-up to the recommendations issued by the Council of Europe's Group of States against Corruption (GRECO);

aligning the legislation on personal data protection with EU standards, notably to ensure that the data protection authority can act in an independent manner and that the activities of law enforcement agencies fall within the scope of the law;

negotiating an operational cooperation agreement with Europol. This also depends upon the above changes to the data protection legislation;

revising the legislation and practices on terrorism in line with European standards, notably by better aligning the definition of terrorism with that set out in Framework Decision 2002/475/JHA as amended in order to narrow the scope of the definition and by introducing a criterion of proportionality.

"Two [of the] requirements need a longer timeline for implementation for practical and procedural reasons. This has made it impossible for them to be fulfilled in a complete manner by the accelerated time for the implementation of the visa liberalization roadmap decided upon by EU Heads of State or Government and Turkey on 18 March 2016," the statement further said.
RELATED TOPICS