EU rules out plan B for migrant crisis, determined to continue with Turkey 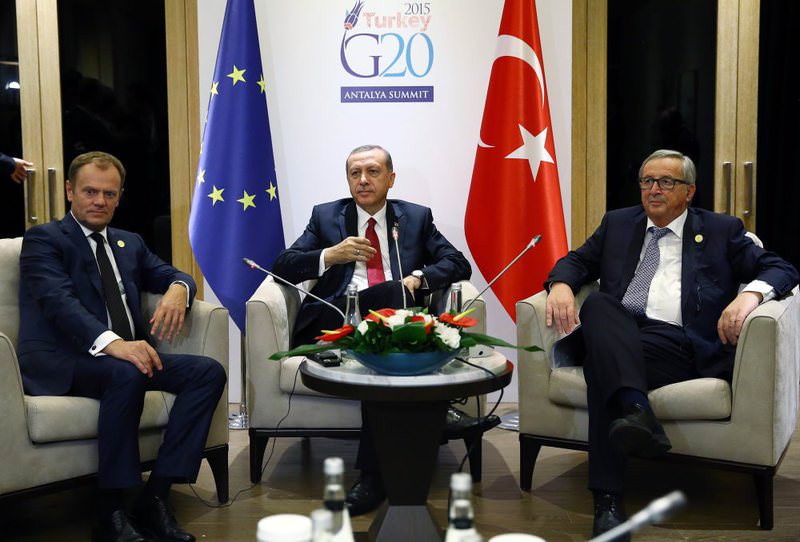 Contary to allegations that the EU is in pursuit of an alternative plan to the migrant deal that was struck with Turkey in March, EU officials said the bloc is committed to making the deal work and there is no a Plan B

An EU official refuted allegations that the EU is preparing a plan B for the migration deal with Turkey in order to curb the refugee influx to Europe, telling Daily Sabah on Tuesday that "the union has a plan A and that is to make the EU-Turkey deal work." Previously, speculation swirled after a report published by the German newspaper Bild and circulated in the European media alleged that the EU was crafting a new plan with Greece to deal with the refugee flow into Europe; due to concerns surrounding Turkey's loyalty to the migration deal, which was struck in March.

According to one unnamed EU minister, in the event that the deal between Ankara and Brussels fails, arrangements could be made to keep asylum seekers on the Greek islands. If this plan B is realized, ferry traffic to the mainland could be suspended and refugees who are denied asylum could be deported to their home countries. Furthermore, the 6 billion euros in aid intended to provide financial relief to a country overwhelmed by refugees would go to Greece instead. Speaking to Daily Sabah, European Commission Deputy Chief spokeswoman Mina Andreeva said the union is committed to making March's deal work. She referred to European Commission President Jean-Claude Juncker's statement in an interview on Saturday in which he said that they have taken the government at its word and will continue to work with government officials.

"President Juncker said that the EU-Turkey deal is producing results, evident in the significant drop in the number of refugees arriving on the Greek islands - an ongoing trend that has resulted in 75 migrants successfully reaching the Greek islands from Turkey," Andreeva said.

"What I can say is that with regard to EU-Turkey relations, we trust that our cooperation, including on migration, will continue along agreed lines," Jüri Laas, the press officer in the Council of the EU, told Daily Sabah.

In the following hours, the German Interior Ministry also denied the allegations in Bild and said there is no reason to doubt the EU-Turkey deal. In a statement the ministry said: "The German government is also doing its best to fulfill the obligations. Therefore, there is no need to think about an alternative solution."

Members of European Parliament (EP) will discuss the European Commission's recommendation to lift the visa requirement for Turkish nationals for the Schengen zone in a plenary session on Wednesday. The discussion was added to the plenary session agenda on Tuesday.

The European Commission's report recommending the visa exemption was discussed by the Committee of Civil Liberties, Justice and Home Affairs on Tuesday, with some members of the committee criticizing the report and the EU-Turkey migrant deal.

Members of the committee also heard the opinion of the EP Legal Service regarding the report's compatibility with EU law, which said that it does not constitute any legal objections.

For a plan B, migrants would have to be kept on certain Greek islands, but despite receiving very low numbers of illegal migrants, Greek authorities are unable to fully control those who have been stuck on the islands for months.
Last Update: May 11, 2016 7:43 pm
RELATED TOPICS