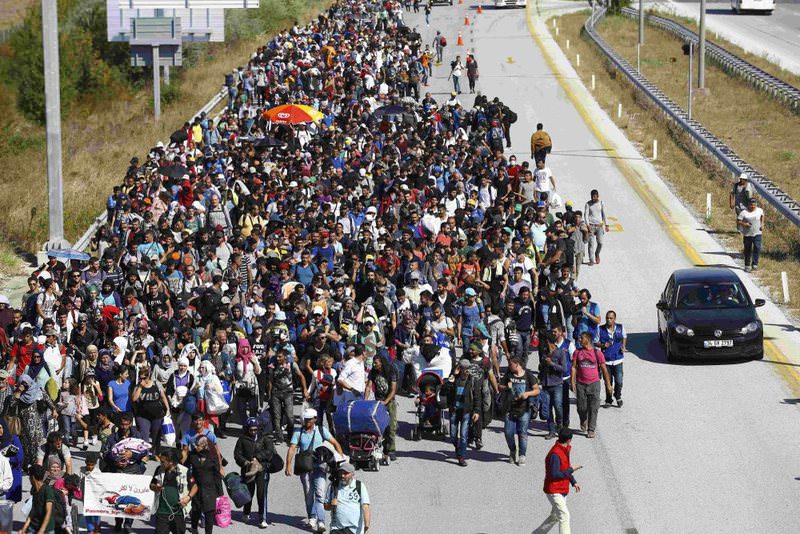 With the European Parliament trying to push Turkey to change its anti-terrorism laws, President Erdoğan and EU Minister Bozkır are firm that there will be no changes. A possible collapse of the whole migrant deal could mean a renewed influx toward the EU

The possibility of a new influx of migrants into the EU's Schengen zone has emerged once again after European Parliament deputies and its president sent negative messages concerning visa liberalization for Turkish nationals by July. While Turkey and the 28-nation bloc exchange ultimatums on visa liberalization, the failure of the Turkey-EU migrant and refugee deal and a new exodus of migrants are once again possible. Justice and Development Party (AK Party) Deputy Burhan Kuzu sent a warning to the EU late Tuesday on his official Twitter account, saying: "The European Parliament will discuss the report that will open Europe visa-free for Turkish citizens. If the wrong decision is taken, we will send the refugees."President Recep Tayyip Erdoğan had also warned the EU in February that migrants could flock to the Schengen zone again once Turkey's patience ends: "If the EU cannot deliver its promises, Turkey could send refugees on buses and planes.

European Parliament has been putting pressure on Ankara since the May 4 European Commission report, demanding that Turkey's anti-terror laws be amended in accordance with EU standards. Turkish authorities, however, have firmly refused to do so, insisting that the anti-terror laws are already at the requested level.

"The EU is telling us to change our law on combatting terrorism. [They] are allowing terrorists to raise tents and then [they] come with such requirements," Erdoğan said last week, adding that the EU can go its own way if the current laws still create a problem for it.

Turkey's EU Minister and Chief Negotiator Volkan Bozkır also ruled out any change to the anti-terror laws, saying: "It's not possible to make any revision to the legislation and practices on terrorism while our country continues its intense fight against various terrorist organizations, and our security officials are being killed every day."

European Parliament has been quite vocal in expressing frustration with the Turkey's terrorism laws, explaining that there will be no visa liberalization by June under if the law does not meet EU standards. European Parliament President Martin Schulz said Wednesday he saw no chance for an agreement on visa-free access to the European Union for Turkish citizens by July. In an interview with German radio broadcaster Deutschlandfunk, Schulz said European Parliament would "absolutely" not begin consultations when Ankara has not fulfilled the conditions for visa-free travel for its citizens. Meanwhile, some member states have criticized the deal between Turkey and the EU to stem the flow of migrant and refugees coming from Turkey. Spain's foreign minister on Wednesday described the deal as a "botched job," blasting Europe's "inadequate" response to its worst migration crisis since World War II.

Speaking to Daily Sabah on the issue, Dr. Mehmet Uğur Ekinci, a researcher at Ankara's Foundation for Political, Economic and Social Research (SETA), said Turkey has the right to unilaterally terminate the readmission agreement and visa liberalization is the focal point. "The EU sees Turkey as a key transit country, which is why a readmission agreement was signed between the two. Turkey accepted this agreement with the condition of visa liberalization," Ekinci said, adding that realizing visa-free travel for Turkish nationals is a must. Asserting that European Parliament puts the whole deal at risk, Ekinci said a new wave of migrants fleeing from Turkey to the EU is a possibility.

Enes Bayraklı, an academic at Istanbul's Turkish-German University, also spoke to Daily Sabah and referred to the EU's request to change Turkey's anti-terror laws "irrational and an insult to Turkey."

"It hinges on the goodwill of the two sides," Bayraklı said, adding that the EU wants to change some things in Turkey by way of visa liberalization benchmarks. "Most benchmarks are political. The EU wants to make changes in Turkey with these," he contended.

Bayraklı also said that the number of migrants reaching the EU has declined drastically because they now know that they will be returned, but "[i]f the deal collapses, they will naturally make their way to Europe again."
RELATED TOPICS