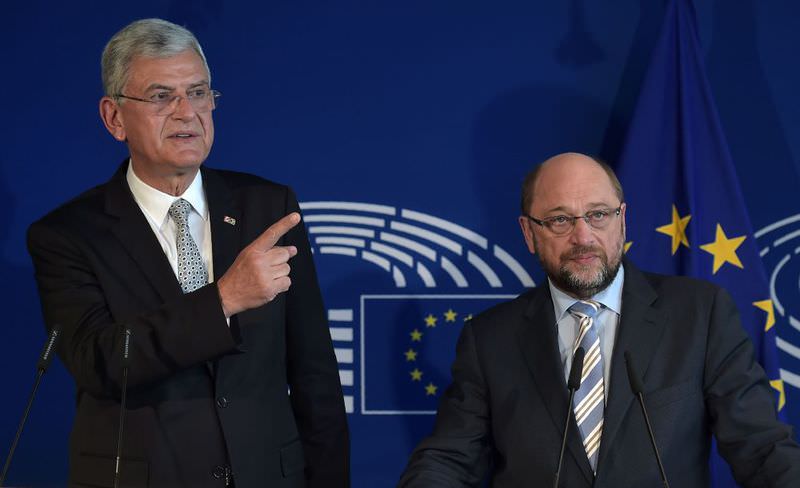 As the European Union insists Turkey changes its anti-terrorism law, Ankara's top diplomat to the EU said the visa-free travel agreement seems unlikely to be finalized. Turkish officials repeatedly said there would be no such changes while the country is being targeted by different terrorist organizations

As Turkey and the European Union exchange ultimatums, Turkey's EU Minister and Chief Negotiator Volkan Bozkır said in an interview with the BBC on Wednesday that Turkish citizens' hopes for visa-free travel to Europe are fading,

And asserted that it is impossible for Ankara to change the country's counterterrorism legislation. "Our assessment is that Turkey has done its best and fulfilled enough requirements. It is not a mathematical problem, but a political problem."

Bozkır said Ankara may work on differences of opinion, but cannot change the anti-terror laws while the country is fighting several terrorist organizations. He spoke following meetings with leading figures in European Parliament.

The joint İKV-Realta survey was conducted in 18 provinces with 1,254 participants on April 23-24. The survey said support for EU accession was up 13 points from 2015.

The possibility that migrants will again flood Europe has re-emerged after European Parliament deputies and its president sent negative messages concerning visa liberalization for Turkish nationals by July. While Turkey and the 28-nation bloc exchanged ultimatums on visa liberalization, the failure of the Turkey-EU migrant and refugee deal means migrants could once stream toward Europe.

President Recep Tayyip Erdoğan warned the EU on Tuesday, saying: "The EU is telling us to change our law on combatting terrorism. [They] are allowing terrorists to raise tents and then [they] come with such requirements," adding that the EU can go its own way if Turkey's current laws are a problem.

Turkey is ready to open its European borders to Syrian refugees trying to make their way to the EU if the bloc fails to keep its promises as part of the EU-Turkey refugee deal, Justice and Development Party (AK Party) group deputy Chairman Bülent Turan told Daily Sabah on Wednesday. "Turkey has done its part regarding the visa liberalization process. Our stance on refugees is clear. They are our dear guests. However, if they want to leave for Europe and the EU does not fulfill what it is required from them [as part of the deal], we will open our borders." Underscoring that Turkey takes its borders and national security just as important as the EU does, Turan said that the EU's expectation for Turkey to change its anti-terrorism laws is not acceptable.

European Parliament has been quite vocal in expressing frustration with Turkey's anti-terrorism laws, explaining that there will be no visa liberalization if the laws do not meet EU standards. European Parliament President Martin Schulz said on Wednesday he saw no chance for an agreement on visa-free access to the European Union for Turkish citizens by July. In an interview with German radio broadcaster Deutschlandfunk, Schulz said European Parliament would "absolutely" not begin consultations while Ankara has not fulfilled the conditions for visa-free travel for its citizens.

Some EU member states have criticized the deal between Turkey and the EU to stem the flow of migrant and refugees coming from Turkey. Spain's foreign minister on Wednesday described the deal as a "botched job," blasting Europe's "inadequate" response to its worst migration crisis since World War II.

Senior official: Turkey can open borders to refugees if promises not keptTurkey is ready to open its borders to Syrian refugees willing to make their way to Europe if the European Union fails to keep its promises as part of theEU-Turkey refugee deal, the Justice and Development Party (AK Party) group deputy Chairman Bülent Turan told Daily Sabah.

"Turkey has done its part regarding the visa liberalization process. Our stance on refugees is clear. They are our dear guests. However, if they want to leave for Europe and the EU does not fulfill what it is required from them [as part of the deal], we will open our borders," he said.

Underscoring that Turkey's border and national security is as significant as that of the EU, Turan said that EU's expectation of Turkey to change its anti-terror laws is not acceptable.

"At a time when Turkey fights the PKK, DAESH and DHKP-C, it is not acceptable that Turkey is requested to change its anti-terror laws," Turan asserted.

"Are those who demand this from us not aware that a state of emergency was declared in France overnight?" he asked.

Turan stressed that Turkey has opened its doors to all refugees fleeing the war in Syria. "I think we passed this test successfully as a state and its people," he added.

Turkey is currently hosting the largest number of Syrian refugees in the world with 2.7 milion and has spent more than 7 billion euros meeting their needs, according to European Commission figures released last year.
RELATED TOPICS