‘Open the borders,' Refugees in Turkey waiting to go to Europe say 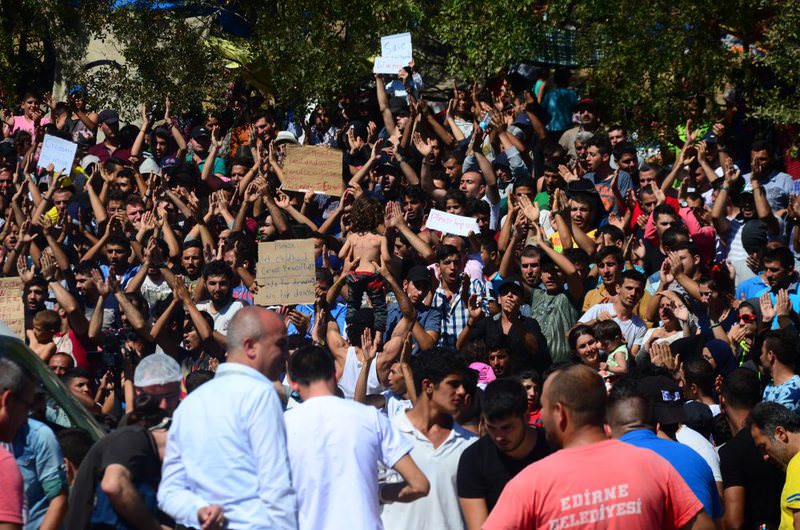 Turkish officials preventing tens of thousands of migrants who wanted to cross into Bulgaria from western province of Edirne in September, when Germany announced that it will grant asylum to a limited number of migrants. (AA Photo)
by Yunus Paksoy, Ismael Shakshak May 14, 2016 12:00 am

With the anticipated collapse of the migrant deal between Turkey and the EU after THE counterterrorism law dispute, Syrian refugees who live in Turkey say they are looking forward to go to Europe and demanded the bloc open its borders

The prospective collapse of the Turkey-EU migrant deal has been looming recently, as visa liberalization for Turkish nationals is hampered by the EU demand that Turkey's anti-terrorism laws be softened. The two sides have recently been sending strict ultimatums back and forth. European Commission President Jean-Claude Juncker asserted on Wednesday that the whole migrant deal would collapse if Turkey did not make changes to its anti-terrorism laws. On the other hand, President Recep Tayyip Erdoğan has remained firm in his position, emphasizing that the country's anti-terrorism laws will not be sacrificed for visa liberalization.

With the EU's days of fewer arriving migrant likely coming to an end if the deal collapses, Daily Sabah set off to the Istanbul district of Fatih, which is home to the city's densest population of refugees. Nearly 500,000 refugees currently live in Istanbul, representative of the vast generosity Istanbul has offered them, and surpassing any city in the world in terms of numbers and opening its doors to those forced to flee the bloody civil war in Syria.

As we strolled around the Aksaray metro station where many refugees sell items on the street and sit in local parks, a refugee boy caught our eye. He was selling a pack of tissues for TL 1 ($0.33). Muhammad, 12, told us that he lost seven of his family members in airstrikes in Douma and that he has been a refugee since 2012. "I have been here for almost a month. I want to leave for Europe, specifically Germany," he said. Muhammad is well aware of the deal between Turkey and the EU. "If there is any opportunity for me, when the deal collapses I want to live in Germany," he said hopefully.

A few hundred meters away we saw two people sitting on the grass with stony faces. Firas, a 31-year-old refugee from Aleppo, said he has been in Istanbul for seven months while his wife is in Europe waiting for a family reunion. "Many of my relatives are still in Aleppo. The situation there is horrible," he said.

"We are allowed to work in Turkey legally," Firas said, adding that he would leave for Europe the minute borders are opened. " God willing," he said, hoping the Turkey-EU deal collapses, which could result in open borders for refugees.

He also blamed the EU for letting Syria's Bashar Assad "slaughter" his own people. "[The EU] could have ended the war. They did not and instead helped Assad. Now they have to help us," he asserted.

Thirty-nine-year-old Iraqi Ammar, a refugee who fled DAESH in Iraq, said he is currently unemployed and waiting for a chance to leave for Europe. "I love Turkey. The culture and hospitality here are unique for us," Ammar said. Scared by the prevalence of Islamaphobia in Europe, Ammar dreams of a better life in Germany. "Open the borders," Ammar said in comments directed to Erdoğan.

Already fragile relations between Ankara and Brussels have been strained recently after demands were raised by the EU demanding Turkey to change its anti-terrorism laws. As the country fights the PKK, DAESH and the Revolutionary People's Liberation Party Front (DHKP-C), Ankara considers the demand "unacceptable."

Refugees in Turkey are desperately waiting for news that the Turkey-EU deal is over. Even though the European Commission and German Chancellor Angela Merkel are saying there is no plan B other than collaboration with Ankara, Turks are getting more frustrated by the EU's requirements.

The dreams of refugees can come true any day if the EU continues to put pressure on Turkey regarding its anti-terrorism laws. "Turkey has done its part regarding the visa liberalization process. Our stance on refugees is clear. They are our dear guests. However, if they want to leave for Europe and the EU does not fulfill what is required [as part of the deal], we will open our borders," ruling Justice and Development Party's (AK Party) Group Deputy Chairman Bülent Turan told Daily Sabah on Wednesday.

We crossed the other side of the avenue and saw a family of four in a park. The father was working as a shoe shiner while his two little daughters ran around playing. We approached Basil, a 40 year-old Syrian, as his daughter shared her döner with a little kitten, half of it already eaten by her sister. Basil said his house was bombed in an airstrike and he fled the war in Syria. His family is shattered, with his son still in Syria and father in Lebanon. He took out his phone and showed a photo of his father lying in intensive care in a hospital after the airstrike. He burst into tears, not able to talk further. Basil's wife joined the conversation: "We would return to Syria once the war is over, but we cannot because they do not want to [end it]."

Still in the same little park, we saw a woman with five children. Her eldest child was selling Turkish accessories. Fatima, a 35-year-old from Homs, said she is grateful for their current condition. " Thank God," she said after the "horrors" she endured in Homs. "I would go back to my homeland the minute the war is over," Fatima said.

Merkel and the rest of the EU have found comfort recently in the wake of the March 18 deal with Ankara. The number of migrants trying to cross the Aegean Sea to the Greek islands has nearly dropped to zero. Turkey apparently came to the rescue of most EU leaders, who had been under stress in domestic politics.

Refusing to grant Turkish nationals visa-free travel without altering anti-terrorism laws, the EU is now at a crossroads. Erdoğan warned the EU by emphasizing that refugees in Turkey can be sent to Europe with "buses and planes," and Merkel's dream could turn into a nightmare in the upcoming weeks.

Turkey, the country's northern neighbor, was one of the first countries to open its doors to Syrians displaced by war and sever ties with the brutal Assad regime, which violently suppressed any opposition. Five years on, Turkey still remains the safest haven for refugees who streamed into the country with few possessions, little or no money and no place to call home. Though Lebanon and Jordan, Syria's other neighbors, accepted the displaced, Turkey is lauded by the international community for offering the best accommodation standards to the refugees. Today, 2.7 million refugees from Syria live in Turkey, a figure that was unimaginable when the first group of 252 refugees quietly entered the country in 2011.

Turkey, although seasoned in hosting refugees as a transit country for migrants from Asia and the Middle East heading to Europe, was apparently unprepared when the exodus of the displaced from Syria started. Still, it managed to mobilize quickly, and tent camps established to host the early arrivals were rapidly upgraded to small neighborhoods with proper housing for refugees.