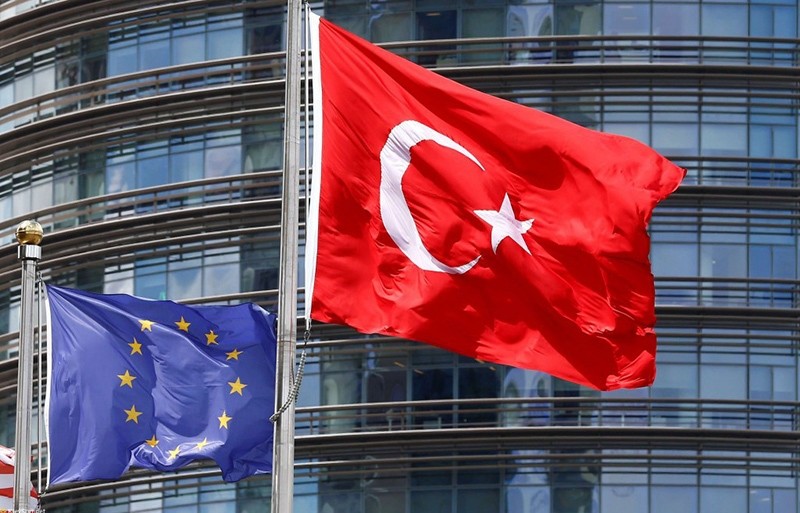 European Union (L) and Turkish flags fly outside a hotel in Istanbul, Turkey (Reuters Photo)
by Anadolu Agency Jun 08, 2016 12:00 am

Turkish and European Union officials pushed each other towards stronger anti-terrorism cooperation at a special one-day summit in the EU capital on Wednesday, amid two deadly car bomb attacks this week in Turkey, one on the day of the summit.

Tunç Uğdul, research and security affairs chief for the Foreign Ministry, led the Turkish delegation in the meeting with EU Counter-Terrorism Coordinator Gilles de Kerchove and his group in Brussels.

The meeting focused on cooperation to block foreign fighters from pouring into Syria and Iraq through Turkey, as well as on the European activities of terror organizations operating against Turkey, Turkish sources close to the meeting told Anadolu Agency, on condition of anonymity due to restrictions on speaking with the media.

Ankara is expected to reiterate its commitment to continue cooperation on blocking the flow of foreign fighters toward Iraq and Syria, said the sources.

From their side, the Turkish delegation sought more cooperation in the fight against the PKK, Syria's PYD and YPG, the DHKP-C, and the parallel state terror organizations operating against Turkey, the sources added.

Turkey wants the EU to end these terror organizations's activities in the EU, to accelerate the extradition of those wanted by Ankara-many with red notices issued for them-as well as to effectively fight the organization's financial structure and resources in Europe.

Turkey has accused the EU of not giving enough support in the fight against terror, with Ankara saying many PKK terrorist organization leaders and members are living in EU countries, and that PKK-owned TV channels broadcast from Belgium.

Turkish officials say even the European Commission fails to encourage member states to closely cooperate with Turkey in the fight against terror.

The EU has said Turkey must revise its "legislation and practices on terrorism in line with European standards" in order for visa liberalization for Turkish citizens to enter into force.

But Ankara has firmly rejected any such change, with Turkey's EU minister Ömer Çelik saying that it is not realistic to expect such changes at a time when Turkey is fighting terror organizations such as the PKK and Daesh.

President Recep Tayyip Erdoğan has also underlined that Turkey will not change its terrorism laws and slammed Belgium and the EU for allowing the PKK terrorist organization to set up tents in front of EU institutions.

On Wednesday, another car bomb was detonated outside a police station in Midyat, a town in the southeastern province of Mardin, killing two civilians and a police officer.

The area has seen considerable PKK activity since the group, which is listed as a terrorist organization by Turkey, the U.S. and EU, resumed its 30-year armed campaign in July last year.