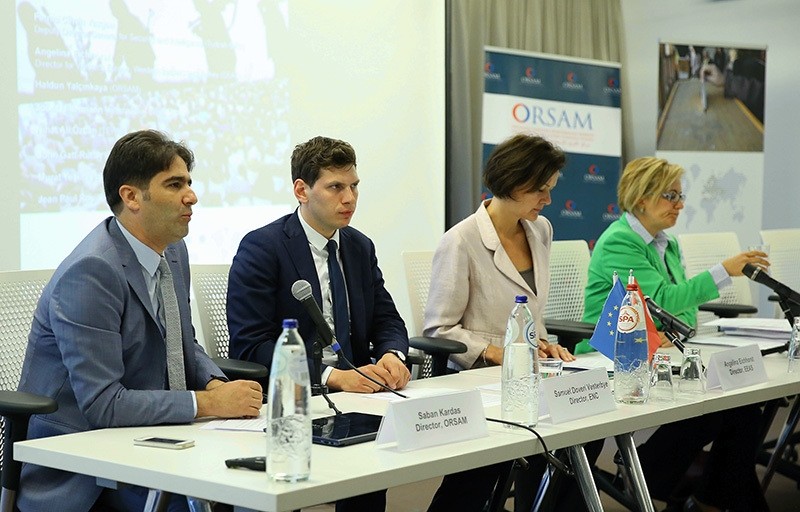 In a joint event held on Thursday, co-organized by the Center for Middle Eastern Strategic Studies (ORSAM) and European Neighbourhood Council (ENC) in Brussels, Belgium, distinguished experts held a discussion titled "Turkey-EU Cooperation in Counterterrorism: Challenges of ISIS and PKK."

As fight the against DAESH and the PKK has been a significant issue for the national security of both European Union countries and Turkey the conference discussed the process of radicalization that foreign terrorist fighters go through, and the importance of cooperation between Turkey and the EU in the area of counterterrorism.

The conference's opening speech was given by Samuel Doveri Vesterbye, the managing director of the ENC, and Şaban Kardaş, the president of ORSAM. Following the opening speech, remarks were given by Fatma Ceren Yazgan, the deputy director general for Security and Intelligence at the Turkish Ministry of Foreign Affairs, about Turkey's efforts and policies on counterterrorism. Later on in the conference Angeline Eichhorst, director of Western Europe, Western Balkans and Turkey at the European External Action Service, gave insight into the European efforts.

In the session that followed on "Foreign Terrorist Fighters and the ISIS" the first speaker, Haldun Yalçınkaya, Security Studies Coordinator at ORSAM, presented background information on the PKK and DAESH's terrorist activities in Turkey. He argued about the definition of foreign terrorist fighters. John Gatt-Rutter, head of division for the Counter Terrorism Team at the European External Action Service, later touched on how to cooperate in the fight against this phenomenon, as well as what kind of strategy should be pursued in regard to foreign fighters who returned their homeland. He ended his discussion with his assessments on how to prevent radicalization. The final speaker of the session, Joost Hiltermann, program director for Middle East and North Africa at the International Crisis Group (ICG), reported on the different groups within DAESH and briefed the attendees on their strategies.

"Ethnic Radicalization and the PKK" was the final topic to be discussed, with contributions from Nihat Ali Özcan, senior security analyst at the Economic Policy Research Foundation of Turkey (TEPAV), Murat Yeşiltaş, Security Studies Coordinator at the Foundation for Political, Economic and Social Research (SETA), as well as Jean Paul Rouiller, director at the Geneva Center for Training and Analysis of Terrorist (GCSP). Speakers addressed the PKK's activities in Turkey and abroad, discussing it from both a political and security-wise perspective, as well as discussing the PKK's similarities and differences from DAESH.

Evaluating the conference with speakers afterwards, Kardaş stated the issue of the PKK and DAESH terror has priority from Turkey's perspective and expressed the importance of international cooperation for counterterrorism, adding: "In this context, cooperation between EU countries and Turkey is more crucial. So far there has not been any collaboration that fulfills the expectations."

Kardaş, highlighting that Turkey and the EU criticize each other on counterterrorism, restated the aim of this conference by saying: "Here, we tried to consider this issue with the contributions of attendees from think tanks. Both sides made their own remarks. Now, it seems that there is a higher level of awareness on the necessity of collaboration compared to the past."

Expressing Turkey's expectations from the EU on the PKK issue, Kardaş stated that: "Turkey wants EU to deal with PKK as a terror issue without separating from other threats [DAESH]. The dynamics behind the PKK on terror and radicalization aren't different from DAESH." He added that just like DAESH, the PKK also recruits from Europe, which is why raising awareness on this issue is important.

ORSAM is an Ankara-based think-tank organization, which holds both national and international conferences, panels and round table meetings to provide the public and decision-making organizations information on international politics and especially Middle Eastern affairs since January 2009. Besides its field events, ORSAM also supports the development of Middle Eastern literature with its website, books, reports, and periodicals.