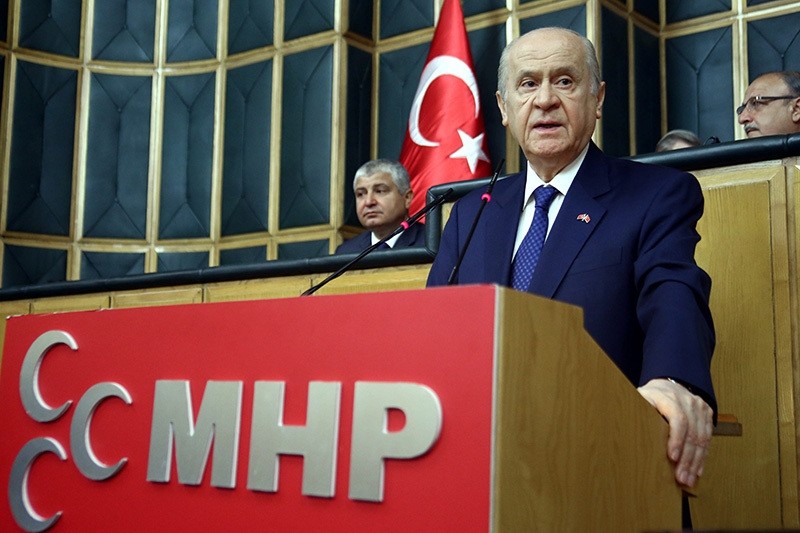 "EU has not kept its words on [proposed visa-free deal with] Turkey and tried to prevent [the country's] fight against terrorism," Bahçeli said.

About talks to reach a visa-free deal between the EU and Turkey, he said: "We say to EU, let the visa exemption be torn into pieces over your head."

He also criticized British Prime Minister David Cameron's comments on Turkey's EU membership, saying Turkey could possibly join the EU in the year 3000 with its current progress in the accession process.

"Turkey is not obliged to Europe and can solve problems on its own," he said.

The EU and Turkey signed a refugee deal on March 18, which aims to discourage irregular migration through the Aegean Sea by taking stricter measures against human traffickers and improving the conditions of nearly three million Syrian refugees in Turkey.

The deal also allows for the acceleration of Turkey's EU membership bid and visa-free travel for Turkish nationals within the Schengen area, on the condition that Ankara meets 72 requirements set by the EU.

While Turkey fulfilled most of the criteria last month, differences between Brussels and Ankara on anti-terror legislation have forestalled the visa-liberalization deal.

According to the EU, Turkey must revise its "legislation and practices on terrorism in line with European standards" in order for visa liberalization for Turkish citizens to enter into force.

But Ankara has firmly rejected any such change, stressing that it is not realistic to expect such changes at a time when Turkey is fighting terror organizations such as the PKK and Daesh.

Backing Turkish government's rejection of changes to the country's anti-terror law, Bahçeli said that Turkey's EU accession process should be brought to the table: "The ruling [AK] Party should demonstrate its capacity and courage.

"If the government will act on behalf of national conscience loyally and defend Turkey's historical rights fearlessly, our national movement will not refrain from supporting the government and would never leave the government alone due to its responsible and national sense of opposition."

Peoples' Democratic Party (HDP) Co-Chairman Selahattin Demirtaş recently visited the European Parliament, where he was seen posing for cameras in front of the YPG flag.

The YPG is the armed wing of the PYD -- the Syrian offshoot of the PKK, which is designated a terrorist organization by Turkey, the U.S. and the EU.
Last Update: Jun 21, 2016 2:40 pm
RELATED TOPICS