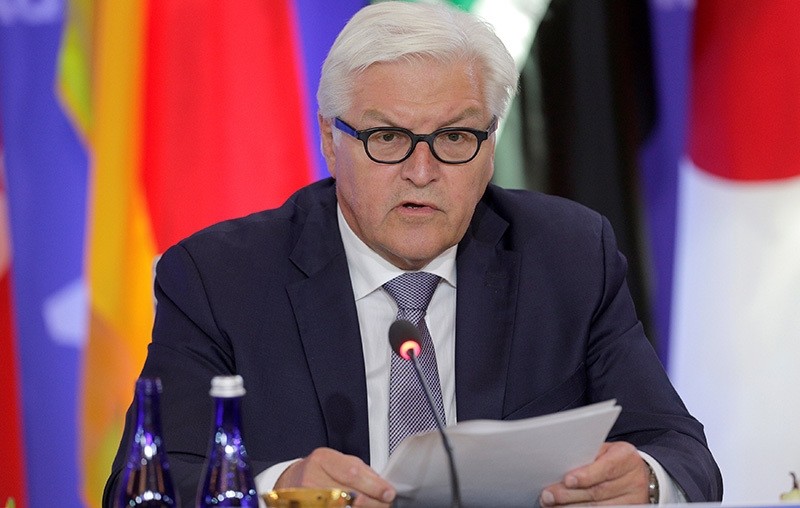 German Foreign Minister Frank-Walter Steinmeier speaks during a Pledging Conference in Support of Iraq, co-hosted by the United States, Canada, Germany (Reuters Photo)
by Daily Sabah with Reuters Aug 05, 2016 12:00 am
Germany's foreign minister on Friday resisted a push by Austria to halt Turkey's accession talks to join the European Union, saying the bloc needed to think more broadly about how to frame its relationship with Ankara in troubled times.

Frank-Walter Steinmeier said their close political, economic and human ties meant both sides should find a way forward as neighbours, rather than focusing solely on the timing of the accession talks, which he said were "as good as deadlocked".

"For me a different question is of decisive importance, namely the question of how to manage the relationship with Turkey in this difficult situation and what we can do for those who have been arrested (following a coup attempt)," he said.

Addressing a news conference after meeting with other German-speaking foreign ministers in Liechtenstein, Steinmeier said reintroducing the death penalty in Turkey - as people and politicians in the country have suggested - would be incompatible with EU values.

Steinmeier spoke just after Austrian Foreign Minister Sebastian Kurz, referring to the promise of visa-free travel for Turks to the EU and accelerated talks on membership, told the same news conference: "I definitely don't see either of these."

Turkey has so far lived up to its side of a landmark deal with Brussels to stop illegal migration to Europe via its shores, in return for financial aid, the promise of visa-free travel to much of the bloc and accelerated talks on membership.

But Ankara has complained Europe is not living up to its side of the accord.

Steinmeier hoped to restore direct talks between Berlin and Ankara.

"I will work to ensure that the dialogue with Turkey does not occur solely via megaphones and microphones and cameras," he said. "There is no alternative, even if it is difficult in these times."

European Commission chief Jean-Claude Juncker on Thursday also rejected Austria's call for the EU to end membership talks with Ankara, warning that it would be a grave error.

Germany is home to around 3 million people of Turkish origin. In Turkey's last national elections, 60 percent of them voted for Turkey's ruling Justice and Development (AK Party) Party, according to the organization of Turkish Communities in Germany.

The July 15 coup attempt was foiled when tens of thousands of people took to the streets to defend Turkey's democratically elected government. The events left at least 239 martyrs, and nearly 2,200 injuries.

The Turkish government has said the coup was organized by followers of U.S.-based Fetullah Gülen and the Gülenist Terrorist Organization (FETÖ).