'EU did not support Turkey in a timely manner after the coup,' EP president says 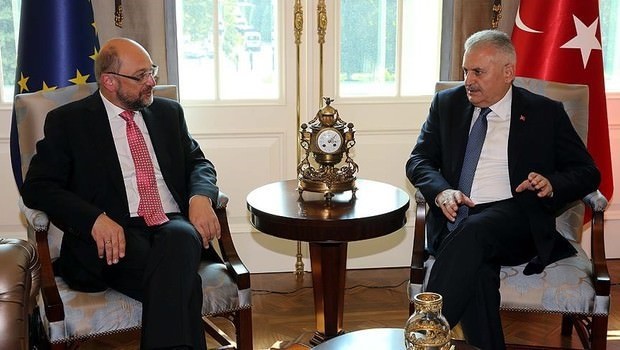 Turkish Prime Minister Binali Yildirim and President of the European Parliament, Martin Schulz at u00c7ankaya Prime Ministerial Office during their meeting in Ankara, on September 1, 2016.
by Merve Aydoğan Sep 02, 2016 12:00 am

The president of European Parliament visited Ankara on Thursday nearly a month and a half after the July 15 bloody coup attempt. The EU was late to show support to Turkey, the EP president said

European Parliament President Martin Schulz on Thursday evening admitted that European leaders did not show support to Turkey in a timely manner after the July 15 coup attempt by the Gülenist Terror Group (FETÖ). Speaking at a press conference with Prime Minister Binali Yıldırım in Ankara, Schulz said: "Yıldırım spoke of a faction within the military that aimed at overthrowing the government through a coup. I would like to thank Mr. Yıldırım. We did not know of this and did not show the necessary reaction in a timely manner. Schulz also praised the Turkish nation's stance against the coup attempt after President Recep Tayyip Erdoğan's call to take to the streets." Yıldırım responded to Schulz's comments, saying that Turkey was disappointed in the EU's lack of support after the coup attempt.

Upon a question regarding EU's demands from Turkey to make changes to its terror laws, PM Yıldırım said: "We have made it clear to the EU that it's not possible to make amendments to the terror law in the current situation." "The EU must understand that the fight against terror in Turkey affects EU security as well," PM Yıldırım added.

Earlier on Thursday, PM Yıldırım also met with Inter-Parliamentary Union members at a lunch on Thursday at the Çankaya Palace and criticized those Western states that remained silent after the failed July 15 coup attempt by the Gülenist Terror Group (FETÖ), saying that "a friend need is a friend indeed." Though nearly two months have passed since the failed coup, international parliamentary organizations arrived in Ankara in efforts to express solidarity. Speaking at the lunch hosted for the presidents of international parliamentary organizations, Prime Minister Yıldırım said "We know those countries that make all kinds of criticism regarding democratic rights during every little incident; the same countries were incapable of protecting democracy when an attack was made directly against it and, to say the least, displayed a pro-coup stance by keeping silent."

Continuing on with his statements at the event, Yıldırım said "there is no other example of an attack in the world where democracy and the Turkish nation was a direct target." While he noted that the Turkish nation's resolute stance is exemplary and an important message to Turkish politicians, Yıldırım stated that "it is our natural right to conduct a defense mechanism within the limits of democracy" against such attempts that threaten the state and people. Turkey's Prime Minister further underlined that many countries have remained silent and said "the coup attempt in a way was a test. It was an option to show solidarity with either those who are pro-democracy or those pro-coup. We have immediately recognized our friends but unfortunately those who we thought of as friend failed to show the same courage against coup." Yıldırım concluded his remarks by urging the international parliamentary organization head to explain what the Turkish people have gone through as he stressed that "Turkey does not accept any double standard when it comes to protecting democratic rights."