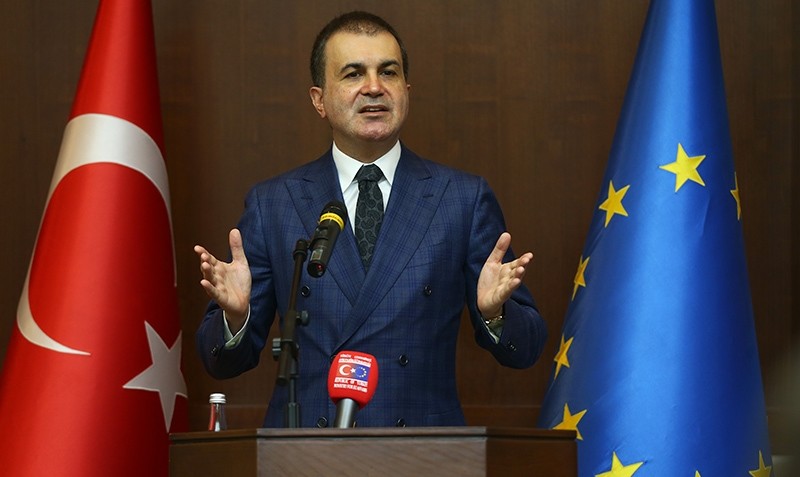 EU Minister Ömer Çelik criticized calls by some Western powers to suspend the process for Turkey's EU accession negotiations, while he slammed a recent decision by a Belgian court to refuse to recognize the PKK terrorist organization's activities as terrorism.

Speaking after a meeting with EU member state ambassadors in Ankara on Monday, Çelik condemned the calls to suspend negotiation talks for being racist.

"We do not want to cut ties with the EU. We want to establish stronger relations with Europe" Çelik said.

Çelik criticized the decision -- made by a lower court in Brussels on Thursday and the subject of an appeal the following day by federal prosecutors -- was an attack on human rights.

"The decision by a Belgian court to not recognize the PKK as a terrorist organization is a direct attack on the European Convention on Human Rights," he said.

Çelik also denounced double standards within EU institutions over the PKK, which is recognized as a terrorist organization by the EU, Turkey and U.S.

According to local media, the court had ruled that PKK activities could not be defined as terrorism because an "armed campaign cannot be considered as terrorist acts."

The judgment came in a case against 36 alleged PKK members when the court refused a prosecution request to send the suspects to be tried by a higher criminal court, the 7SUR7 news website reported.

The suspects are accused of kidnapping children from their families in Belgium and other "Western countries" and sending them for training to Greece and Iraq, the website said. They are also accused of forging documents and extortion.

Among those standing trial are Remzi Kartal and Zubeyir Aydar, said to be senior members of the PKK's European arm. They were among PKK suspects arrested in March 2010 in raids on 18 addresses across Belgium.

Belgium has been criticized in the past for failing to act against the PKK. In August, supporters in Brussels were allowed to celebrate the anniversary of the terror group's first attack and five months earlier followers set up tents outside EU buildings ahead of a Turkey-EU summit.