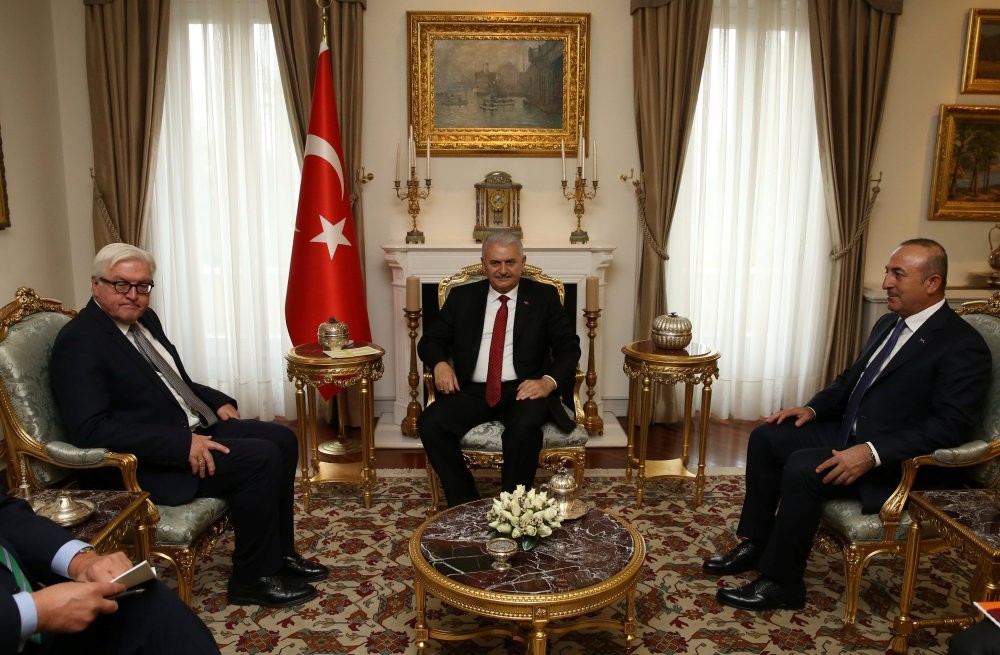 During the German foreign minister's visit to Ankara Tuesday, his Turkish counterpart Mevlüt Çavuşoğlu reminded that Germany failed to convince Turkey about fighting specifically against the PKK and FETÖ by not extraditing all terrorists to Turkey

As strained Turkish-German relations continue to intensify, Germany's Foreign Minister Frank-Walter Steinmeier (L) arrived in Ankara yesterday in efforts to abate the tensions where he failed to convince Turkish officials of Germany's position and his Turkish counterpart Mevlüt Çavuşoğlu (R) reminded him of the more than 4,500 legal cases pending on PKK terrorists residing in Germany who, aside from three, have yet to be extradited to Turkey. Germany's all-inclusive, tolerant and supportive stance toward suspected perpetrators from Turkey who are wanted in connection to several terrorist organizations in Turkey is drawing ire among Turks. German State Minister Michael Roth recently stated that his country would offer a safe haven to all those who hold opposing views in Turkey while assuring that the German government stands in cooperation with those individuals. Under that premise, Steinmeier spoke during a joint press conference with his Turkish counterpart Tuesday, saying that Turkey had misunderstood Germany's claims of being a "safe haven" for terrorists and expressing Berlin's solidarity with Turkey in its fight against Daesh and the outlawed PKK terrorist organization.

However, the comments of Germany's foreign minister were not well received by Çavuşoğlu, who said that 4,500 pending legal cases involving PKK terrorists in Germany have been exacerbated by the "FETÖ affiliates who have been fleeing there [to Germany] recently. I was just in Switzerland where I learned that one PKK member and a DHKP-C [Revolutionary People's Liberation Party-Front] terrorist had been deported and they [the two terrorists] went to Germany. Why are they deported from two different terror group affiliates to Germany? When we mention these incidents you [referring to Germany] get offended but we must address this."

Continuing on to stress that Turkish citizens and representative offices are not safe in Germany, Çavuşoğlu said, "Just yesterday, the PKK was openly and abrasively holding protests in Cologne. Attacking Turkish consulates, burning the cars of our officials and just recently they held attacks to prevent our reception. My citizens there [in Germany] and our representative offices are not safe." The foreign minister went on to tell his German counterpart that "We [Turkey] have expectations from Germany, the foremost being that we do not want PKK terrorists allowed to roam freely throughout Germany," while conveying the frustrations of the Turkish people for what he called the EU's "hypocrisy and double standards"applied to Turkey.

The German foreign minister first met with his Turkish counterpart before a visit to Turkish Parliament in Ankara which was heavily bombarded by FETÖ airstrikes. He also held talks with Prime Minister Binali Yıldırım and President Recep Tayyip Erdoğan later in the afternoon in Ankara. Despite Steinmeier's strong efforts to dispel tensions by numerously condemning terror and urging the PKK to lay down its arms, the recently published report on the Protection of the Constitution by the German Federal Office for the Protection of the Constitution (Bundesamt für Verfassungsschutz) revealed shocking information. Although Germany, like other EU-member states, recognizes the PKK as a terrorist organization, the report revealed that there were a total of 14,000 PKK terrorists in Germany as of 2015, while intelligence provided in the report stated that more than 780 of them had traveled to Syria and Iraq by the end of 2015 in efforts to join Daesh and other extremist terrorist groups. It further stresses that "the PKK continues to be the largest extremist organization affiliated with foreigners in Germany," while underlining that it "is a permanent threat to Germany's national security."

The report also states that the "PKK continues to be able and prepared, if necessary, to use violence in Germany, at least in isolated cases or to tolerate acts of violence carried out by its young followers. Though peaceful events prevailed in Europe in 2015, violence remains an option under the ideology of the PKK. Against the background of the escalating violence in Turkey, a return of the PKK to militant forms of retaliatory action cannot be ruled out." Contrary to Steinmeier's remarks about his "determined stance against terror groups," the official report by the German government also addressed the terrorist DHKP-C, saying that "The DHKP-C considers Germany a safe haven." Nowadays, Germany also faces criticism for its refusal to pursue FETÖ members whose sympathizers freely operate in the country, operating Gülenist schools and large companies despite several prominent figures in those institutions being wanted by Turkish law enforcement and state prosecutors. In that respect,Turkish President Erdoğan said last week that terrorism is "like a boomerang," and that it would eventually turn and strike Germany.
RELATED TOPICS