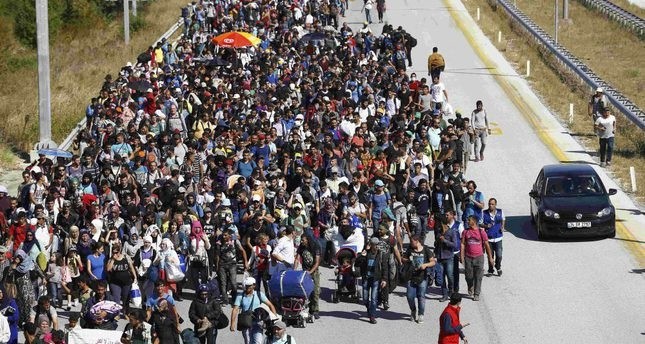 Syrian migrants walk along the Istanbul-Edirne highway as they attempt to cross the Turkish-Greek border in Edirne on Sept. 15, 2015.
by Yunus Paksoy Nov 26, 2016 12:00 am

After the EP approved a resolution to freeze Turkey's membership bid, Erdoğan sent a harsh ultimatum to the EU, saying borders could be opened to migrants willing to leave for Europe, which is expected to galvanize millions of Syrians and Iraqis in the country

President Recep Tayyip Erdoğan's tern warning to the European Union that Turkey could open its borders to migrants willing to leave for Europe is likely to encourage Syrians and Iraqis living in Istanbul. Amid a harsh exchange of words between Ankara and Brussels, President Erdoğan on Friday gave the EU his harshest-ever ultimatum, saying that Turkey will open its borders to migrants "if you push any further." "You did not keep your word. When 50,000 refugees were at the Kapıkule [Turkey-Bulgaria] border, you cried out. You started to say: 'What will we do if Turkey opens border gates?' If you push any further, the border gates will be opened," Erdoğan asserted.

Turkey and the EU reached an agreement in March to stem the flow of migrants trying to reach Europe via the Aegean Sea. Ankara agreed to take back migrants illegally reaching EU borders in exchange for funding for Syrian migrants taking shelter in Turkey, opening new chapters in its full membership bid and visa-free travel for Turkish citizens. Referring to the famous case of Syrian refugee toddler Aylan Kurdi, whose body washed ashore in Turkey in 2015, Erdoğan said: "Now in the world there are millions of Aylan Kurdis waiting for a response, compassion and mercy. Are there any steps taken for them? No."

Even though Turkey implemented the readmission agreement and the number of migrants crossing the Aegean Sea declined drastically, the EU has failed to grant visa liberalization and open new chapters.

Ankara has been warning Brussels, saying that it will drop the migrant deal if the EU does not finalize visa liberalization by the end of this year.

The 28-nation bloc has been vehemently calling on Ankara to change its anti-terror laws and withdraw the state of emergency across the country.

Daily Sabah talked to Syrians and Iraqis living in Istanbul in May when Ankara first sent an ultimatum to the EU. The migrants were quite hopeful of the collapse of the Turkish-EU migrant deal.

"I don't think Turkey will simply open its gates. I interpret Erdoğan's statement as a warning that Ankara could abandon the migrant deal," Mehmet Uğur Ekinci, a researcher at the Ankara-based think tank Foundation for Political, Economic and Social Research (SETA), said.

Turkish-EU relations hit a new, deeper low on Thursday after the European Parliament (EP) approved a resolution to freeze Turkey's full membership bid. Deputy and Chief Negotiator Ömer Çelik stressed that the decision is "a non-binding political decision." Çelik also said that the decision showed that the EP lacks vision.

Enes Bayraklı, an academic and a foreign affairs specialist, said that Turkey has a right to cancel the migrant deal because the EU did not keep its promises. "Everything is reciprocal in international relations. Turkey did not receive what it is supposed to from the EU," he asserted.

The resolution was passed with 479 votes in favor of the resolution to temporarily halt the negotiations with Turkey, while 37 were against and 107 abstained. According to the statement released by the EP, the "temporary halt of the negotiations would entail that no new negotiating chapters be opened and no new initiatives be taken in relation to Turkey's EU Negotiation Framework."

Ekinci asserted that Ankara and Brussels cooperation in the Aegean Sea by monitoring migrant passages. "Turkey could review the cooperation as well. It could stop joining forces with EU countries in the Aegean," he contended.

"The EU's hostile attitude towards Turkey means that Ankara should look for other options in relations with the 28-nation bloc," Bayraklı contended.
RELATED TOPICS