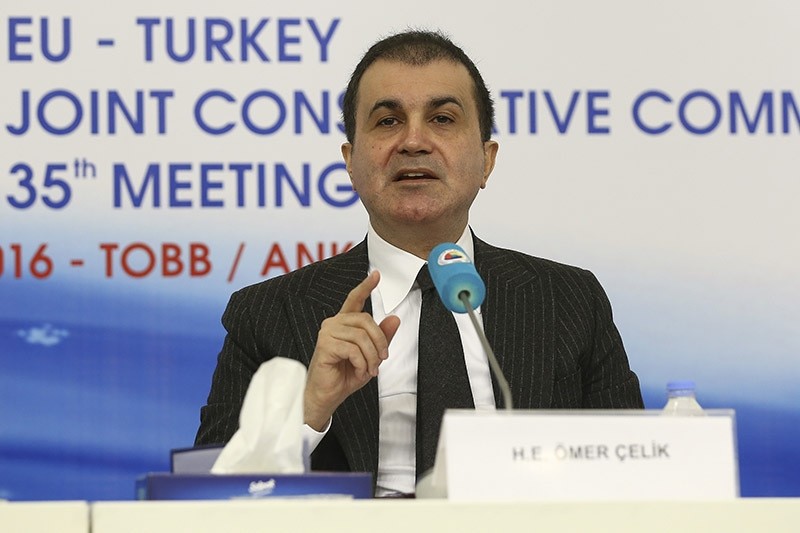 Speaking at the 35th Turkey-EU Joint Advisory Committee, Minister Çelik also urged the EU to open Chapters 23 and 24 which he described as the "heart of negotiations," stating that they are necessary for a productive discussion on human rights and democracy between Turkey and the EU.

"Instead of opening these chapters for progress, the EU adopted an exclusivist approach criticizing Turkey day and night," he said.

Çelik also added that the EU's complicated policies have increased anti-Turkish sentiment before each election in Europe, which enables European far-right parties to grow stronger.

Earlier today, Çelik also commented on the results of Austria's presidential election, in which a far-right nationalist party took around 47 percent of the vote, on Twitter.

"Even though the far-right has lost numerically, it has risen in politically in Austria", he wrote.

The EU Minister warned that the 47 percent of popular vote "for [a] far-right candidate must be read very carefully for the sake of European politics" stating that promoting extreme-right and racist ideas in key EU countries would create major problems.

The European Parliament adopted a non-binding temporary motion in November, urging member-states to freeze Turkey's accession to the bloc.

Some ministers from EU countries including Germany objected to the decision fearing it will further damage relations between Turkey and the EU.

Ankara repeatedly criticized the European Union's stance on the PKK terror group and FETÖ, saying EU states are turning a blind eye to the terror attacks against the Turkish state and its people as well as the activities of the group within the borders of the EU.

Turkey's accession talks started in 2005. In 1963, Turkey and the European Economic Community (the EU's former name) signed an association agreement.