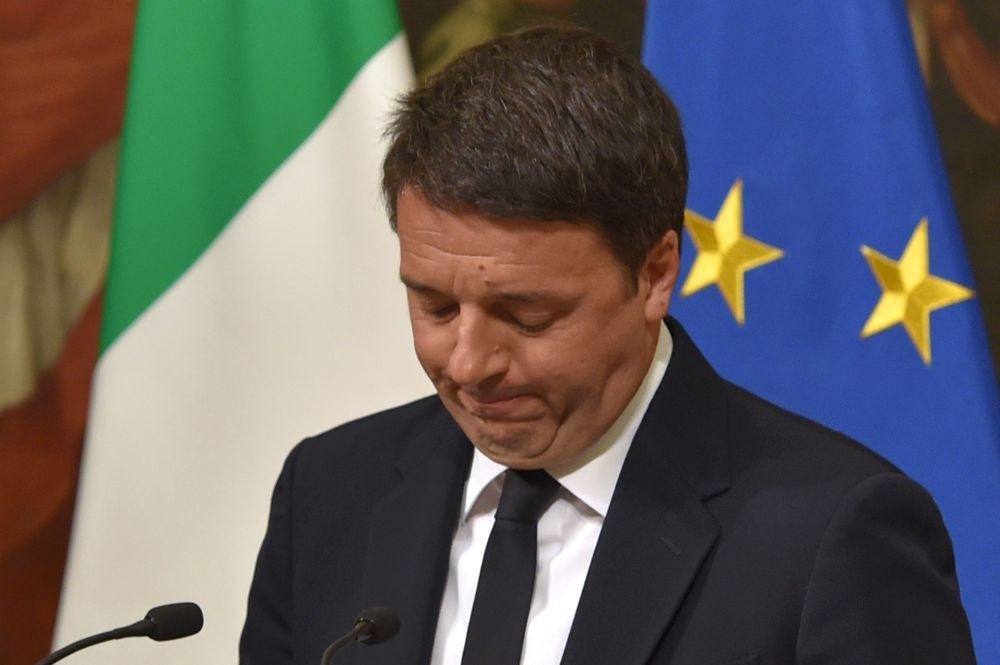 Italian PM Renzi announces his resignation during a press conference at the Palazzo Chigi following the results of the vote for a referendum on constitutional reform Dec. 5.
by Yunus Paksoy Dec 06, 2016 12:00 am

While the EU was exchanging words with Ankara and issuing harsh warnings, it has been dragged into yet another crisis after the Italian PM lost in a referendum against anti-EU circles and handed in his resignation

The EU is being pulled into further turmoil with Italian Prime Minister Matteo Renzi's heavy defeat in a constitutional referendum on Sunday, while Brussels exchanged words with Ankara on several issues. There have been fears across Europe that the 28-nation bloc could collapse following the overwhelming migrant crisis. Those fears turned into a partial reality with the Brexit and may further come true with the victory of anti-EU circles in Italy. "In four or five years, there may not be an EU to talk about as anti-EU campaigns are gaining so much support across Europe," Enes Bayraklı, a foreign affairs specialist at the Foundation for Political, Economic and Social Research (SETA) and an academic at Istanbul's Turkish-German University, said.

The naysayers in Italy's constitutional reform referendum prevailed by 60 to 40 percent, according to a pollster. The opposing side is known for its anti-EU stance. Renzi said late Sunday that he would hand in his resignation to President Sergio Mattarella on Monday.

Renzi's gamble with the referendum is similar to that of former British Prime Minister David Cameron. The British premier in June failed in the Brexit vote and stepped down as a result.

Far-right extremism has been on the rise within the union as well. In addition, anti-Turkish rhetoric has played a significant role in certain campaigns. Cameron used this rhetoric quite often in his "remain" Brexit campaign.

Cameron dismissed the idea that Turkey would join the bloc any time soon, joking that its current progress toward accession meant it would not become a member until the year 3000.

Brexit supporters also argued that the U.K. would be exposed to increased immigration and security risks from Turkey if it were to join the EU.

"The EU has not been following a rational policy regarding Turkey, unnecessarily criticizing it on several issues," Bayraklı contended.

"The result of Austria's presidential election, in which a far-right nationalist party took around 47 percent of the vote, should be read carefully," EU Minister Ömer Çelik said yesterday.

The coming year will be a year that tests the EU's endurance in time of crises. Dutch voters will go to the polls and British Prime Minister Theresa May is expected to invoke Article 50 of the EU treaty, triggering a tight two-year countdown to the Brexit. Only a month later, the first round of the French election will take place.

"The EU is in chaos after it abandoned its basic principles and distanced itself from neighboring non-EU countries that fight for democracy, human rights and equality," Turkey's Deputy EU Minister Ali Şahin told Daily Sabah.

Underscoring that EU member states will more frequently question the union, Şahin said that the EU is not unraveling, but is in turbulence.

"There is a leadership problem in the EU," Şahin contended.

It remains unknown whether the EU will continue to pick on Ankara while dealing with its own problems. Recently, the EP approved a resolution to freeze Turkey's full membership talks.

The EU is yet to keep its promises as part of the migrant deal well. Ankara is still waiting for visa liberalization and for the opening of new chapters while EU Minister and Chief Negotiator Ömer Çelik said yesterday that the resolution to freeze Turkey's membership bid is the "most visionless decision in the history of the EU."

"Moves that are made in line with the visionless decisions of the EP will go down in history as marginal decisions. ...In the future, we should cooperate more in the face of big challenges," Çelik said.

When asked about the future of Turkish-EU relations, Bayraklı said: "While Turkey does not need the EU politically, both sides need each other economically. So, I think the two parties could discuss a different type of economic partnership."
RELATED TOPICS