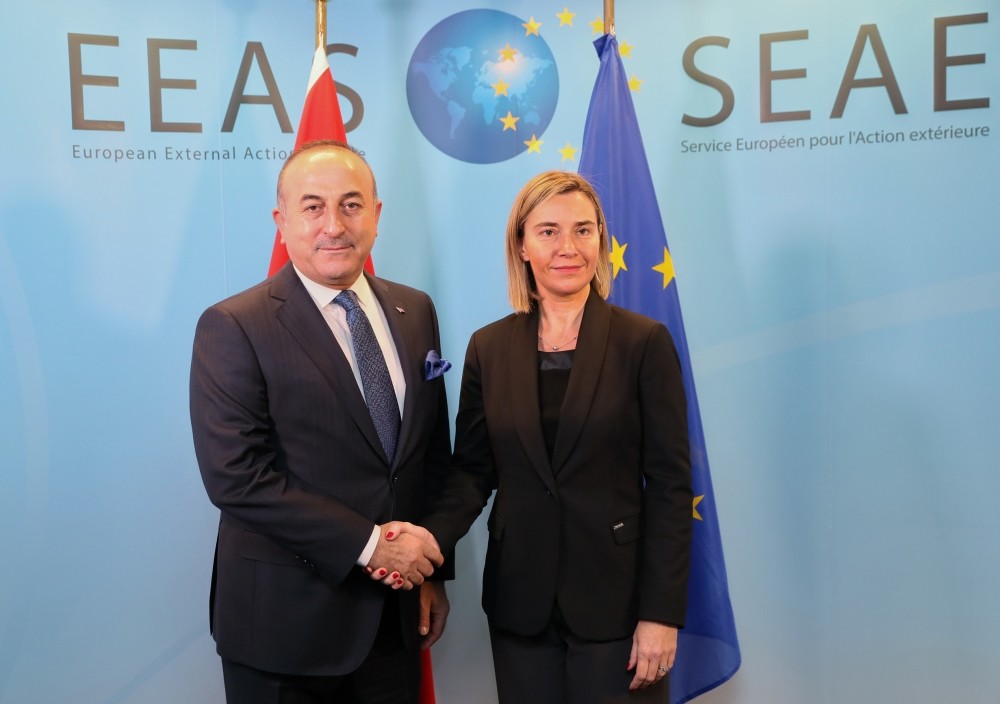 Mevlu00fct u00c7avuu015fou011flu (L) and Federica Mogherini
by Mehmet Solmaz Dec 07, 2016 12:00 am
Foreign Minister Mevlüt Çavuşoğlu, who arrived in Brussels Tuesday to attend the two-day NATO Foreign Ministerial Meeting, met with European Union Foreign Affairs chief Federica Mogherini. In a statement released after the 45-minute-long meeting, the European Commission said the meeting reaffirmed the commitment of both sides to continue their political dialogue and engagement in areas of common interest and challenge. Despite strong anti-Turkey developments in EU circles, Mogherini is known for her support of dialogue to overcome the crisis with Turkey.

While some EU officials have raised their voices to freeze Ankara's EU accession negotiations, Mogherini says channels of communication should always be open for both sides to listen to each other's concerns and that Turkey has strategic importance for the bloc's policies on Syria, energy, the Caucasus and Cyprus.

The EC stated that Çavuşoğlu and Mogherini discussed a range of topics related to EU-Turkey relations, internal developments in Turkey, as well as regional issues, including Syria and the Cyprus reunification talks. "On Syria, they discussed the dire humanitarian situation and ongoing efforts to deliver aid to those in need, as well as the political track, including post-conflict reconciliation and reconstruction, linked to the beginning of transition, as part of the outreach the High Representative is conducting in the region in full coordination with the United Nation's Special Envoy Staffan de Mistura," the statement said.

With regard to the Cyprus issue, they both underlined the importance of reaching a comprehensive settlement which would be "beneficial to the wider security and stability of the region" as well as to the relationship between Turkey and the EU.

Although the row with Russia has topped the agenda at the latest NATO meetings, the chief of the alliance has said Turkey is a key partner in NATO and its close relations with Russia do not create a problem. Speaking at a news conference a day before yesterday's NATO Foreign Ministerial meeting, Jens Stoltenberg said warming Turkish-Russian relations were not a problem for NATO.

"Obviously, Turkey's talks with Russia do not contradict its key alliance and [the country's] NATO obligations," he said. "Turkey is a key ally for different reasons. But not least for its strategic geographical location bordering Iraq and Syria... Turkey is key to manage the refugee crisis and... in our fight against [Daesh]," Stoltenberg said. He added that Turkey was also "important for Europe in addressing different kinds of challenges and security threats."

U.S. Secretary of State John Kerry also arrived in Brussels to attend the NATO meeting, according to the State Department. The gathering is important in terms of the latest tensions between Turkey and EU. "He'll meet there and discuss with allies, partners efforts to further strengthen NATO security, project stability to the alliance's east and south, and enhance NATO-EU cooperation," U.S. State Department spokesman Mark Toner said during a press briefing. The meeting comes amid tensions between the U.S. and its NATO ally Turkey, which fights U.S.-backed terrorist groups in Syria.
Last Update: Dec 07, 2016 12:25 pm
RELATED TOPICS