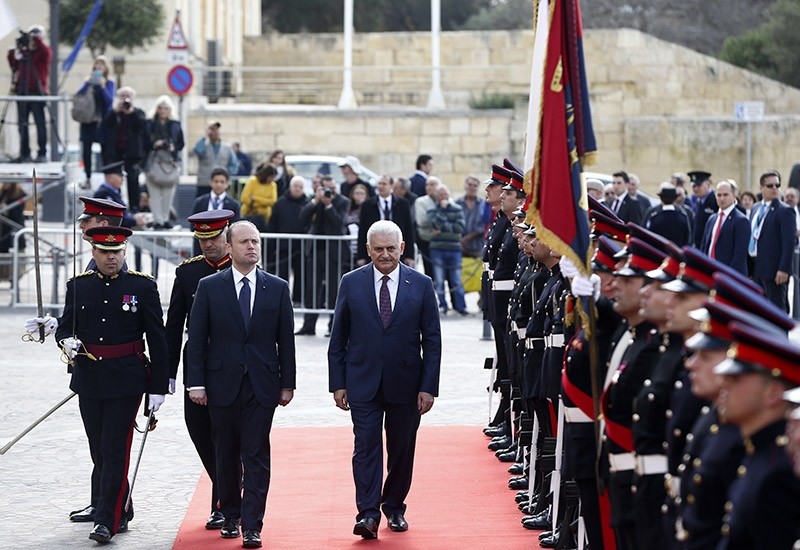 Prime Minister Binali Yıldırım said on Friday that Turkey expects stronger ties with the EU under Malta's presidency of the Council of the European Union during a visit to the Mediterranean island nation.

In a joint press conference with his Maltese counterpart Joseph Muscat at the Castille Palace in the capital Valletta, Yıldırım said: "Malta is a country that has unconditionally supported Turkey's full EU membership, we appreciate that. During Malta's presidency, we hope that relations between the EU and Turkey will improve further, additional admission chapters will be opened and work on the Customs Union Agreement that had been previously agreed to be renewed will commence."

The prime minister also hailed Malta's support to Turkey after the July 15 coup attempt by the Gülenist Terror Group (FETÖ). He said Ankara appreciates Malta's backing of the Republic of Turkey.

When asked about the issue of visa-free travel for Turks, Muscat said the ball is in the court of the European Commission. "A new report will be released on March 1. The situation looked good until a short time ago. There was a good situation prior to the coup," he said, adding that there are some problems with terrorism.

The Maltese prime minister said the remaining conditions that Turkey needs to fulfill are vital. He asserted that he will work toward bettering relations and sorting out problems with Ankara.

Yıldırım said he is happy to be the first Turkish prime minister to pay a visit to Malta, which coincided with the 50th anniversary of the establishment of diplomatic relations between the two countries. Malta has recently decided to open an embassy in the Turkish capital Ankara.

The prime minister also dismissed European criticisms on press freedom in Turkey. "Freedom of the press, [of] speech and justice is important for Turkey. I want to say to those who criticize Turkey in these regards: 'Let's open new EU chapters on it, then discuss.' "Here I openly call on the EU to open chapters 23 and 24 on media, press and justice. We will answer whatever they need there," he added.