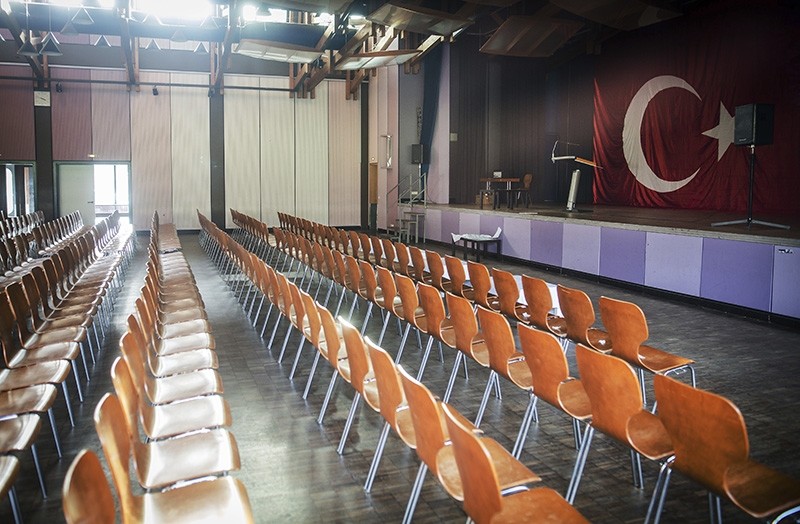 Picture taken through a glass pane of the entrance shows the interior of the Rotenfels festival hall in Gaggenau, southern Germany, Thursday, March 2, 2017. (AP Photo)
by Daily Sabah Mar 02, 2017 12:00 am

The German authorities in the southern German town of Gaggenau controversially withdrew permission on Thursday for an event where Turkey's Justice Minister Bekir Bozdağ would have met with Turkish citizens in a rally.

Bozdağ was scheduled to meet the Turkish community in Gaggeneau and deliver a speech, where he was expected to address the crowd about the upcoming referendum on April 16 for the proposed constitutional amendments in Turkey. An event that was organized by the Union of European Turkish Democrats (UETD).

In a statement released by the city of Gaggenau, it was stated that the event was canceled due to security-related concerns and the limited capacity of the hall where the event would have been held. Gaggenau Mayor Michael Pfeiffer said the decision was not a political one.

Meanwhile late Thursday, according to the German Press Agency (DPA), an official from the city of Cologne said an event on March 5, where Economy Minister Nihat Zeybekci would be holding a rally through the UETD, has also been canceled. "There was no agreement for March 5, and there will not be," the official reportedly told the DPA.

Germany's opposition left party criticized the planned appearance on Thursday of Turkey's justice minister at a political rally in southwest Germany, and called on the government to deny him entry into the country. While the German government has indicated that it has no plans to prevent Turkish officials from speaking to the 1.4 million Turkish voters in Germany, the issue of the AK Party politicians holding rallies in Germany has been a hot issue between the countries' governments.

The registered 2.3 million Turkish voters living abroad will be able to cast their votes in 57 countries at Turkey's 119 foreign missions and 32 customs stations. With an estimated 3 million people, the largest Turkish community abroad is based in Germany.

A similar banning incident took place in the country at a Turkish rally in Cologne following the July 15 coup attempt. Tens of thousands of Turks living in Germany gathered in the city to show solidarity with their compatriots back home to condemn the July 15 coup attempt perpetrated by the Gülenist Terror Group (FETÖ). Before the event, Germany's highest court decided to prevent President Erdoğan from addressing the rally via a video call. However, earlier on Sept. 3, 2011, German authorities allowed senior PKK commander Murat Karayılan to address a crowd at a culture festival.

Ankara has long criticized Germany for being a safe haven for the PKK's recruitment, propaganda and funding activities.

Although the PKK is banned in Germany, which is home to a large Kurdish community, the terrorist group has been carrying out significant activities throughvarious cultural associations. According to the BfV's annual report released in June, the PKK raised more than 13 million euros ($14.3 million) in Germany last year. The group, which is listed as a terrorist organization by the EU and U.S., is responsible for the deaths of more than 44,000 people in a decades-long campaign against Turkey, and it has recently intensified its terrorist attacks.

Furthermore, Ankara also asked German authorities to take steps against FETÖ members residing in Germany. President Erdoğan criticized the German authorities during German Chancellor Angela Merkel's recent visit to Turkey for their lack of a speedy process in the extradition of the FETÖ members being sought by Turkey. "We've sent the U.S. 85 boxes of evidence, and we are still waiting for a legal decision," Erdoğan said, continuing his criticism of the U.S., where FETÖ leader Fetullah Gülen has been residing since 1999. He also called on the German authorities to speed up their legal processes, as justice delayed is justice not served.