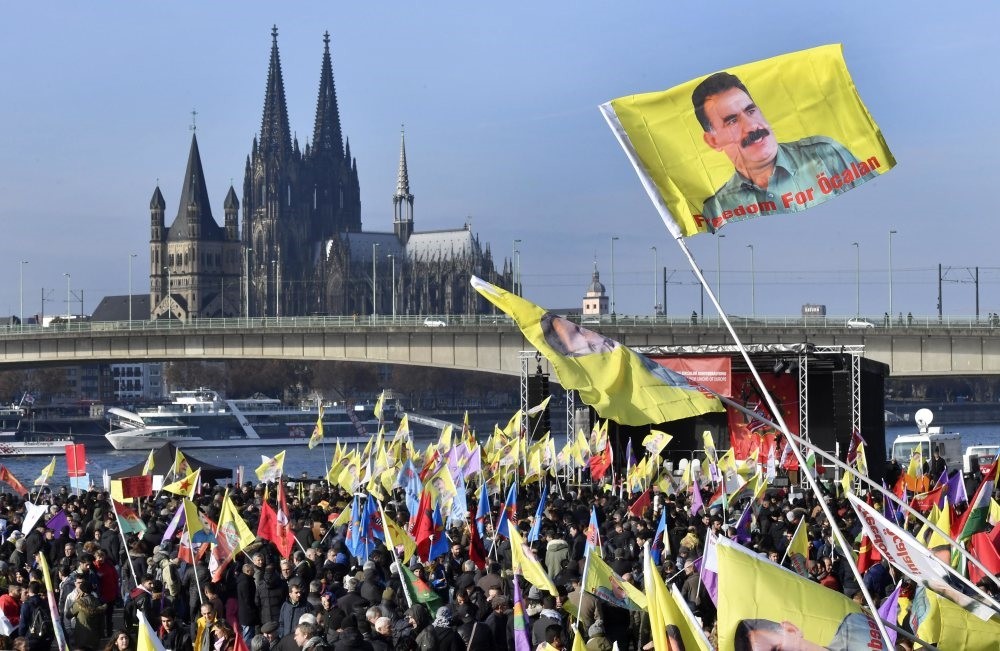 A PKK demonstration in Cologne, Germany, Nov.12, 2016. Although the PKK is recognized as a terrorist organization by the EU, it is free to hold demonstrations across the country.
by Mehmet Solmaz Mar 03, 2017 12:00 am

Despite EU officials' rhetoric that they have fulfilled their commitments on the migrant deal with Turkey, reports show that almost no steps have been taken until now in terms of relocating refugees, delivering pledged aid and providing visa-free travel for Turkish citizens

Although the European Union has failed to keep most of its pledges made at the summit with Turkey in March last year, the bloc said it "is fully committed to the application of the EU-Turkey Statement." The EU's failure to fulfill its part of the deal was shown in a report released yesterday by the European Commission. According to the report, which focused on the implementation of the deal, only 3,565 Syrian refugees were relocated to EU countries. The promised number in the deal was 72,000. Furthermore, only 750 million of the pledged 3 billion euros have been transferred to Turkey. During a press conference in Brussels, the commissioner for migration, Dimitris Avramopoulos, stressed that the deal with Turkey continues to deliver tangible results for Europe.

"Daily crossings from Turkey to the Greek islands have gone down from 10,000 persons in a single day in October 2015 to 43 a day now. Overall, arrivals have dropped by 98%. The number of lives lost in the Aegean Sea since the Statement took effect has also substantially fallen, from 1,100 to 70," he said.

Following the press conference, Daily Sabah asked EC officials whether the EU is looking to solve the deadlock with Turkey or adopt a Plan B, if one exists. Officials claimed that the deal, which Turkey benefits little from, is a contract of mutual trust and delivery and refused to comment on whether the EU has an alternative plan to overcome the migrant crisis.

When reminded that eight months have passed since the first date set for granting visa liberalization to Turkish citizens while the matter remains unsolved, the EC officials said that the Commission and Turkey have continued to engage in dialogue to find solutions, including the legislative and procedural changes needed on all outstanding benchmarks.

The EU demand that Turkey soften its counter-terrorism legislation has been rejected by Ankara on the grounds that it is combating different terrorist groups and that Turkey recently experienced a military coup attempt by the Gülenist Terror Group (FETÖ) in July. Although it is claimed that the EU and Turkey are working on a formula to overcome the deadlock on the terrorism issue, EU officials declined to comment on the claim.

The EU's reluctance to shoulder its share of the burden of the refugee influx from war-torn Syria, coupled with the blocs stingy handling of funds allocated to the deal with the Syrian refugee crisis in Turkey as well as its insistence that Turkey alter its counter-terrorism laws for visa-free travel to EU member states have heightened tensions in Ankara and angered the Turkish public.

During the press conference, Avramopoulos also said member states had until September to take in 160,000 Syrian and other refugees from Italy and Greece. He said that so far only 13,500 have been relocated in a process bogged down by general inertia and resistance from Eastern European states. "If we don't have tangible efforts by September... the commission will not hesitate to make use of its power," Avramopoulos warned.

Nearly one year after the migrant deal with Turkey that saved the EU from its largest refugee crisis since World War II, it seems that the deal has done little to contribute toward strengthening ties with Ankara. Brussels' calls for cooperation have not extended beyond weak rhetoric and President of the European Council Donald Tusk admitted that the EU's demands regarding Turkey's counter-terrorism laws would be difficult for Ankara to meet, citing the threats from numerous terrorist groups and the recent increase in terrorist activity across the country, which is still reeling from the July 15 coup attempt. Tusk admitted that "I know that this is not a sign of a bad intention but objectively, they [Turkey] are in a very difficult situation." On the other hand, EU Foreign Policy Chief Federica Mogherini also stressed the importance of keeping all channels of communication open to allow both sides to listen to each other's concerns, adding that Turkey is of strategic importance for the bloc's policies on Syria, the Caucasus, Cyprus and the region's energy sector.

Despite the positive rhetoric, no steps have been taken since these statements were made, compelling leaders in Ankara to announce publicly that the possible eradication of the migrant deal altogether — as well as a referendum to ask the nation if it wants to continue accession negotiations with the EU — are now on the table.
Last Update: Mar 03, 2017 1:10 am
RELATED TOPICS