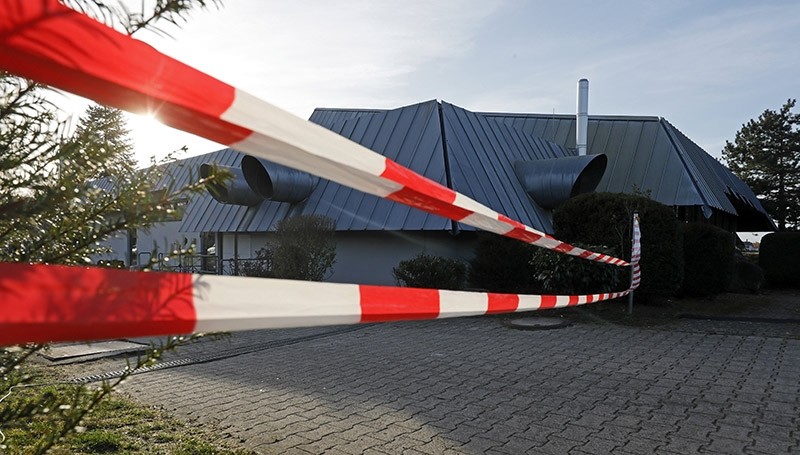 Barrier tape in front of the festival hall where Turkish Justice Minister Bekir Bozdau011f was scheduled to speak in a convention organized by Union of European Turkish Democrats (UETD) in Gaggenau, near Karlsruhe, Germany, March 02, 2017. (EPA Photo)
by Yunus Paksoy - Kaan Elbir Mar 06, 2017 12:00 am

Turkish nongovernmental organizations in Germany criticized the banning of Turkish Ministers, saying that there are 'double standards' against Turkish ministers and that it is the natural right of authorities and Turkish-Germans to organize and attend such events.

President Recep Tayyip Erdoğan late Sunday asserted that no one in Germany could prevent him from entering the country and addressing his fellow Turkish citizens. The president's tone in the face of German authorities was stern as he likened the actions of the German government to those of the Nazis.

Union of Turkish Democrats (UETD) Deputy Chairman Fatih Zingal, said that the events were canceled for "comical reasons." Stressing that nobody believes the reasons Germany put forward, Zingal said there has been a double standard.

Secretary-general of the nationalist Turkish-German Federation, Fatih Oğuz said that there will be a referendum in Turkey on April 16 and it is the natural right of Turkish-Germans to be informed of what is happening in Turkey with rallies held by Turkish authorities.

Oğuz said that Turkish authorities have the right to come and hold rallies and events in Germany in a democratic way.

"It is something that democracy requires," he said, adding that the German government should not treat Turkish-Germans as second class citizens.

"Such events and rallies should not even be made a topic of discussion," he added.

The Germany branch of the Republican People's Party (CHP) told Daily Sabah that CHP deputy Deniz Baykal canceled his event in Germany in protest to the rally ban. The branch said that the CHP wants both "yes" and "no" parties to express their voices in Germany.

Chancellor Angela Merkel's spokesman said the German government "strongly rejected" the equation of modern Germany with Nazi Germany, adding that such comparisons minimized the crimes of the Nazis. Seibert called on Germany to keep calm. "Let's keep a cool head," he said.

Turkish national and co-Chairman of Germany's Green Party Cem Özdemir said that Erdoğan's words were "irrational" and he called on the German government to react to the situation with a "cool head." He also called for joint European action in the face of the Turkish authorities' rallies.

Germany's Christian Social Union in Bavaria Party (CSU) Secretary General Andreas Scheuer commented on the Nazi remarks as well, calling Erdoğan "the despot of the Bosporus," adding that his words were an outrageous gaffe.

Parliamentary Group Leader Volker Kauder of the Christian Democratic Union (CDU) asserted that it is unacceptable for NATO-ally Turkey to speak about a fellow NATO ally in such a way.

However, an ex-EU commissioner said on a television show late Sunday that the EU's approach toward Turkey has been wrong. Günther Verheugen said that a deal was reached last year between Ankara and Brussels, but the dirty work was given to Turkey. He also slammed the EU for failing to speed up Turkey's membership process.

Bozdağ strongly condemned the decision, calling the decision a purely fascist practice. Despite strong reactions from Turkish politicians, Gaggenau Mayor Michael Pfeiffer said the decision was not a political one.

In the wake of the incident, the Turkish Foreign Ministry summoned the German Ambassador to Ankara Martin Erdmann and he was received by the deputy secretary responsible for European affairs Mehmet Kemal Bozay. Turkey's written démarche was also delivered to Erdmann.

Likewise, a hotel in Germany's northern port city of Hamburg cancelled Foreign Minister Mevlüt Çavuşoğlu's scheduled March 7 conference, also citing security reasons. Çavuşoğlu has had three phone calls with his German counterpart in the last two days and the two foreign ministers are scheduled to meet on Wednesday. Tomorrow, Çavuşoğlu plans to meet with Turkish-German citizens prior to the ministerial meeting. "We will go and meet our citizens," Mevlüt Çavuşoğlu told representatives of various nongovernmental organizations and mukhtars (neighborhood heads) in Turkey's southern province of Antalya.

Meanwhile, Economy Minister Nihat Zeybekci delivered a speech in the German city of Cologne where he reiterated that there are millions of Turkish citizens living in Germany and Turkish authorities have the right to conduct rallies regarding the upcoming referendum: "We extend our right to meet with our [fellow] Turkish citizens. Every country which hosts Turkish nationals has an obligation to provide this right," he said.

Among Germany's 3 million-strong Turkish community, nearly 1.5 million of them are eligible to vote. Roughly half a million Turkish nationals also live in the Netherlands - a populace highly concentrated in the city of Rotterdam. Turkish citizens are expected to cast their votes for the upcoming referendum at their local Turkish consulates between March 27 and April 9.

"EU should take measures against xenophobic practices of EU gov'ts"

Austrian Prime Minister Christian Kern also joined in the dispute as well, calling on the cancellation of Turkish rallies across Europe. EU Minister and Chief Negotiator Ömer Çelik reacted to Kern's statement, calling on the EU to take measures against the anti-Islamic, anti-Semitic and xenophobic practices of EU governments, citing the EU's hypocritical practices regarding fundamental human rights.

The Parliamentary Assembly of the Council of Europe's (PACE) Turkey Group president has called the ban on Turkish ministers from addressing their communities in Germany ahead of the April 16 referendum in Turkey a "violation of human rights."

"We call on the Council of Europe [CoE] to do its duty," Talip Küçükcan told Anadolu Agency (AA) ahead of the PACE Political Affairs Commission meeting in Paris on Monday.

"The repressive mindset towards our [Turkey's] ministers can never be associated with the values of the Council of Europe. Therefore, we will raise this issue during today's PACE Political Affairs Commission meeting in Paris," Küçükcan said.

An official petition has already been filed at the Commission which highlights the unjust ban, he said.

It is one of the missions of PACE to protect the lawmakers of CoE member countries, he said, adding that Turkey would do its best to prevent discrimination against its ministers and elected representatives.

Turkish-German relations have become strained due to several issues over the past couple of years. While Ankara accused the German government of aiding and abetting terrorists of the PKK terrorist organization and the Gülenist Terror Group (FETÖ), the latter rejected the claims.

Earlier this year, Germany accused Turkish imams serving in Germany of espionage and hosted PKK-organized events and rallies despite the PKK having been declared a terrorist organization by the EU, Turkey and the U.S. German Chancellor Angela Merkel used the phrase "Islamic terrorism" during a press conference attended by President Erdoğan Feb. 2, alienating Turkish officials.

Since 2017 began, Germany has adopted a harsher stance regarding its policy on Turkey which has been decried by Turkish officials and political leaders on numerous occasions. Political leaders have also warned German authorities that their decisions could have a dramatic impact on bilateral ties.

Opposition Nationalist Movement Party (MHP) Chairman Devlet Bahçeli expressed his full support to President Recep Tayyip Erdoğan in his dispute with Germany over the rally ban. Stressing that Erdoğan is not alone in his decision to travel to Europe to hold a rally with Turkish citizens, Bahçeli said that he would travel with him as well. "I am together with the president to put forward a Turkish spirit in Europe, which is an important part of the Turkish world," he said. The MHP chairman has been siding with President Erdoğan in his bid to change the constitution in the April 16 referendum.