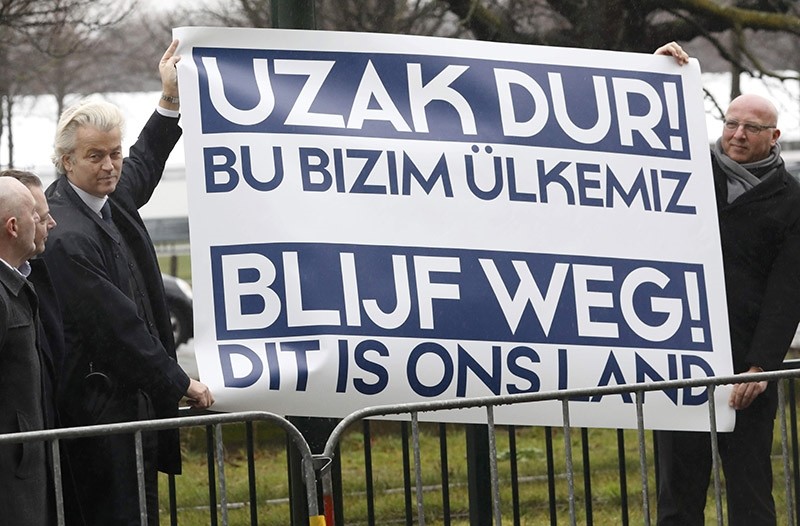 Dutch far-right politician Geert Wilders of the PVV party takes part in a protest outside the Turkish embassy in The Hague, Netherlands, March 8, 2017. Banner reads ,Stay away from our country. This is our land., (Reuters Photo)
by Daily Sabah Mar 08, 2017 12:00 am

Amid a decline in opinion polls a week before the general elections, far-right Dutch politician Geert Wilders accelerated his anti-Islam, xenophobic and vulgar rhetoric against Turkey in a bid to boost his votes

Geert Wilders, the leader of the Dutch anti-Islam Party for Freedom (PVV), held a short demonstration in front of the Turkish embassy in the Hague on Wednesday.

Wilders protested Turkey's Foreign Minister Mevlüt Çavuşoğlu's potential visit to the Netherlands, saying he was not welcome in the country to lobby for "yes" votes in a Turkish referendum on constitutional changes.

Amid tight security, the far-right leader stood in front of a banner saying: "Stay Away! This is our country." Wilders added that dual citizens should not have a right to vote in the Netherlands. There was no reaction from within the embassy to the protest.

Wilders' PVV on the decline in opinion polls

It is running second behind the pro-business liberals of Prime Minister Mark Rutte, which along with the CDA hastoughened some of its rhetoric on immigration and Islam in the hope of capturing support from Wilders.

On Tuesday, Wilders targeted Socialist leader Emile Roemerin an online campaign advert, after the latter said in anewspaper interview that "fear of Islam is talked into you". The advert responded by listing acts that Islam supposedly punishedwith death, including apostasy and homosexuality.

The Dutch election is being closely watched in France and Germany, where populist anti-EU and anti-immigration politicianshope to make major gains in national elections this year anddeliver upsets that could reshape European politics.

But with Wilders' party now trailing on 14.6 percent in Peilingwijzer's poll of polls behind Rutte's VVD on 16.4 percent, and the Christian Democrats not far behind on 12.1 percent, that prospect may be receding.

The demonstration came the morning after Çavuşoğlu addressed a rally in the German city of Hamburg and a week before the Dutch elections in which Wilders is likely to make strong gains.

On Sunday, Çavuşoğlu said that Dutch politicians requested that he not visit the Netherlands for Turkey's referendum campaign, as it could be politically wielded by far-right leader Wilders to "boost votes."

"You [Dutch politicians] started to tell me, 'Mr. Minister, if you come now, Wilders's votes will increase. Please, come after the election." "Is this my problem? If you told me properly, I would help you in this regard as well, but if you first make a statement to the press saying, 'No, he can't come,' and then say this, then we won't buy it," Çavuşoğlu said.

Çavuşoğlu said that the currently increasing far-right trend in Europe is the result of "their turning a blind eye to racist parties," and that Turkey has warned the EU of the consequences of such actions. "You have turned a blind eye to these parties. Now, you started to act the same way. Where is Europe headed to? Where is democracy, human rights, freedom? They are dragging us into the pre-World War II period," he said.

Meanwhile, local German authorities have been cancelling public appearances of Turkish ministers and government officials, campaigning ahead of the April 16 referendum in various German towns and cities, based on poor excuses, such as inadequate parking space and security concerns.

Police and local authorities in Hamburg cancelled Çavuşoğlu's meetings on two different occasions before Çavuşoğlu was finally able to address the Turkish community at the residence of the Turkish Consulate General in Hamburg.

Several other politicians across the EU have also defended the ban against Turkish politicians.
Last Update: Mar 08, 2017 4:56 pm
RELATED TOPICS