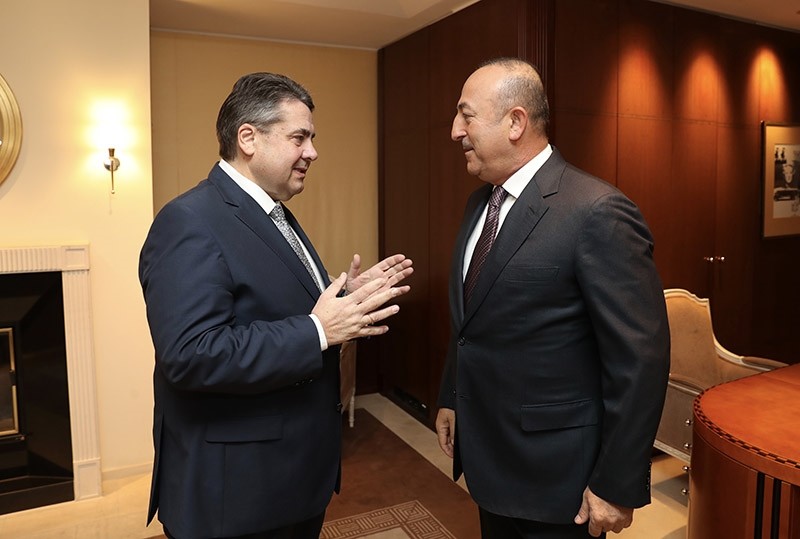 The foreign ministers of Turkey and Germany held a breakfast meeting in Berlin on Wednesday, the first meeting of government representatives since a diplomatic row about a controversial ban on Turkish officials campaigning in the country and the arrest of journalist Deniz Yücel.

The two foreign ministers expressed a common desire to lower tensions and normalize relations, while encouraging dialogue as not to damage their historical ties.

Çavuşoğlu was in Germany to promote constitutional reform that would expand the powers of presidency and abolish the post of prime minister. Some 1.4 million Turks are eligible to vote in a referendum on the issue, which is scheduled for April 16.

Gabriel said Wednesday, while warning Ankara that comparisons to Nazis in any row is a "red line that cannot be crossed".

Despite the differences on both sides, "there is no alternative to dialogue because that is the only way we can return step by step to a normal and friendly relationship," he said.

In a statement after the meeting, Gabriel said he addressed the referendum, campaigning by Turkish ministers in Germany, as well as the arrest of German-Turkish journalist Deniz Yücel, which he referred to as "wrong and inappropriate." Turkey accuses Die Welt correspondent Yücel of links with the RedHack, a band of hackers known for their terror links, in addition to propaganda on behalf of the PKK terrorist group.

The meeting comes one day after Çavuşoğlu addressed fellow Turks outside his country's consulate in Hamburg as part of the government's bid to appeal to expatriate voters. The venue he had wanted to use cancelled citing fire safety concerns, which followed two other cancellations, prompting furious reactions from the Turkish minister.

Previously on Friday, Cologne authorities withdrew permission for a hall to be used for a speech by Economy Minister Nihat Zeybekci in Frechen on the outskirts of the city. Zeybekci later addressed Turks in Cologne on Sunday.

After his meeting with Gabriel, Çavuşoğlu is set to attend the International Travel Trade Show in Berlin to promote tourism to Turkey.