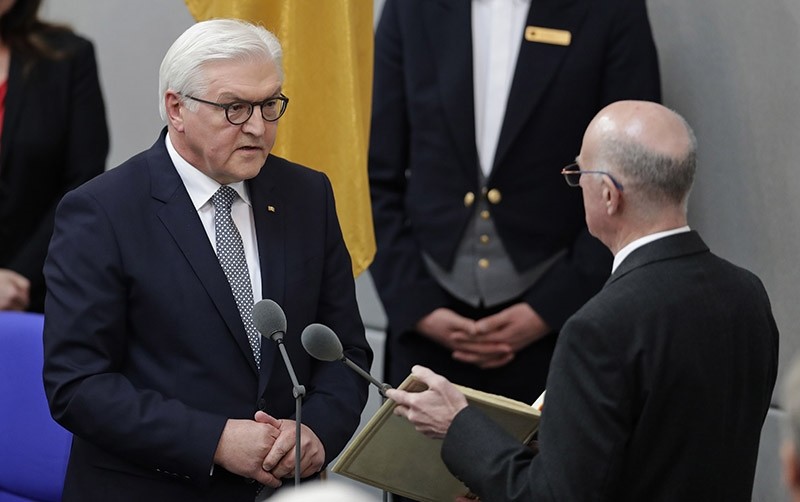 Germany's Frank-Walter Steinmeier used his first speech as president to target Turkish President Tayyip Erdoğan, claiming he risked destroying everything his country had achieved in recent years and damaging ties with its partners.

Ankara has been embroiled in a row with Berlin and other European capitals over meetings with Turks living in Europe and campaigning among the Turkish diaspora for a referendum on switching to presidential system.

"The way we look (at Turkey) is characterized by worry, that everything that has been built up over years and decades is collapsing," Steinmeier claimed on Wednesday in his inaugural speech in the largely ceremonial role.

"President Erdoğan, you are jeopardizing everything that you, with others, have built," he said, adding that he would welcome "credible signs" to ease the situation.

"But end the unspeakable Nazi comparisons!" Steinmeier said. "Do not cut the ties to those people who want partnership with Turkey! Respect the rule of law and the freedom of media and journalists! And release Deniz Yücel."

The usually diplomatic Steinmeier had harsh words for President Donald Trump during last year's U.S. election campaign, referring to him as a "hate preacher."

Steinmeier, the 61-year-old Social Democrat who was replaced as foreign minister by Vice Chancellor Sigmar Gabriel earlier this year, will be received with military honors at Berlin's Bellevue Palace later on Wednesday.

He replaces Joachim Gauck, who stepped down this month after a single term.

Starting out as a legal adviser in the state of Lower Saxony in 1991, Steinmeier held a series of senior positions, including vice chancellor and chief of staff to Social Democrat chancellor Gerhard Schroeder in 1999.

As a reform-minded moderate on the right of the party, he helped push through Schroeder's controversial drive to reform the welfare state.

The 2005 elections brought Merkel's Christian Democrats to power at the head of a grand coalition with the Social Democrats, and Steinmeier was appointed foreign minister.

Four years later he ran unsuccessfully against Merkel, returning to the opposition benches as head of the Social Democrats' parliamentary group. In 2013 Steinmeier was back in office as foreign minister in Merkel's third coalition.

The son of a carpenter, Steinmeier studied law and politics at Giessen University. He is married to Elke Buedenbender, a judge, and they have one adult daughter. In 2010, he absented himself from politics for a few weeks to donate a kidney to his wife.