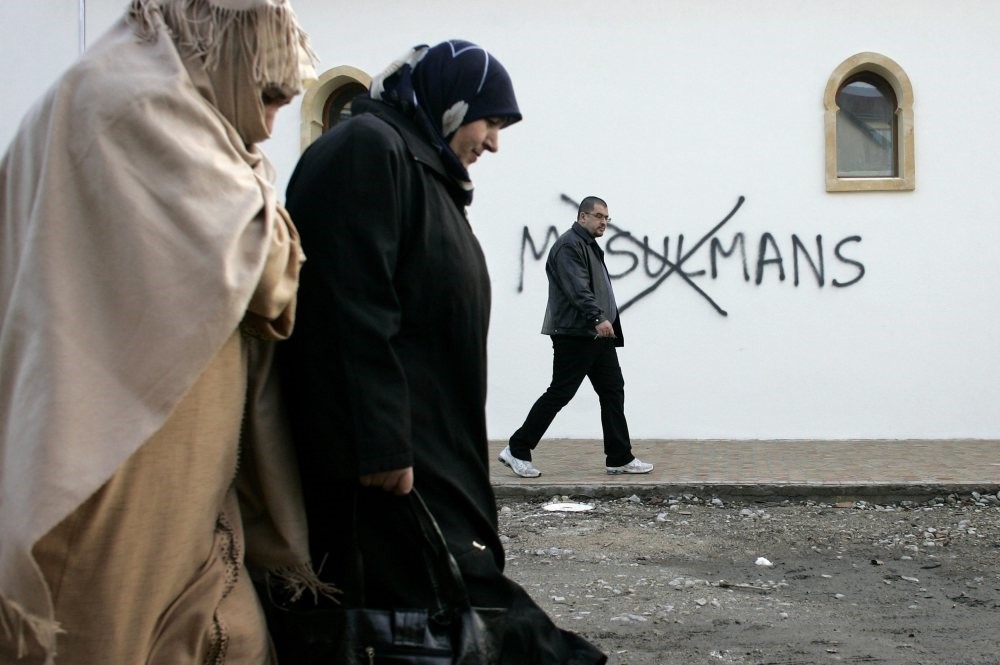 A recent report revealed that increasing Islamophobia is becoming a threat to the democratic order, values, social peace, and coexistence in the EU, as anti-migration, anti-Islamic rhetoric has begun to dominate its politics

As anti-migration, anti-Islamic rhetoric has begun to dominate European politics with the rising far-right politics across Europe, the annual European Islamophobia Report (EIR) has revealed that Islamophobia is becoming a real threat to the foundations of democratic order and the values of the EU, social peace, and peaceful coexistence across Europe. The second edition of the annual EIR report, published by Turkey's leading think tank the Foundation for Political, Economic and Social Research (SETA), covers 27 European countries and monitors the developments of Islamophobia in these countries analyzed by 31 prominent scholars who specialize in racism, gender and Islamophobia studies.

The findings of the reports clearly show that the level of Islamophobia in the fields of education, employment, the media, politics, the justice system and the internet is on the rise. Emphasizing that democracy and human rights in Europe are in a state of decline, the report also indicated that Islamophobia has become a finite problem affecting the everyday lives of Muslims across Europe. ''It [Islamophobia] has surpassed the level of rhetorical animosity and has become a physical animosity that Muslims feel in everyday life be it at school, the workplace, the mosque, public transit or simply on the street," the report reads.

The report covers incidents and developments in 2016 such as the turmoil in Europe following the refugee crisis, the rise of far-right political parties and the U.K.'s decision to leave the EU, emphasizing that even though small successes have been witnessed in some European countries in terms of the fight against Islamophobia, there is an immense set of challenges that lie ahead for solidifying the values of human rights and freedom of religion in Europe.

The report also compares its findings to similar surveys on this topic.

According to the SETA foundation's findings, "Muslims are seen as the enemy 'within' Europe." The report goes on to note that ''there is a wide consensus in Western societies that Muslims are not seen as equal citizens. Treating them as 'others' and subjecting them to differential treatment may also overlap with the dehumanization of Muslims. Thus, physical attacks and political restrictions can often be carried out and even defended in an atmosphere of widespread distrust and enmity."

Emphasizing that the segment of society that exhibits Islamophobic tendencies is not only limited to the working poor and the middle class but also the so-called educated elite, the report underlines that Islamophobia affects vast swaths of European society.

"Racism, including Islamophobia, tells us more about the mentality of racists than about their imagined scapegoat or their victims. Hence, Islamophobia reveals aspects of Europe and the internal problems European societies continue to face. Recognition and critical consciousness of this societal disease is of utmost importance in being able to create more equal societies in Europe,'' the report states.

''We see that people simply lack basic knowledge on Islam and Muslims' practices. We see a need for the introduction of more comparative religion courses, or religious teaching, in a formal and informal educational setting,'' the report adds.

According to the findings, when there is an incident of discrimination, hate crimes and hate speech, a number of different response mechanisms are available; yet, none of these are familiar to the vast majority of Muslim citizens in European countries. Thus, the report recommends that response mechanisms should be made more available, accessible and clear while underlining that the empowerment of the Muslim community is needed to allow citizenship and help European states deepen their democracies.

The report also includes recommendations for European countries regarding policy making, such as raising awareness in civil society of the problem of Islamophobia and institutional racism as well as urging politicians to speak out against Islamophobia.

"Europe needs more courageous politicians who do not only challenge the politics of right-wing populist parties but also challenge institutionalized forms of racism that target Muslims in the workplace, education, the state bureaucracy, and the media,'' it adds.

The report also calls for journalists and editors to challenge Islamophobic reporting in their news media coverage and provide space for more balanced views.
RELATED TOPICS