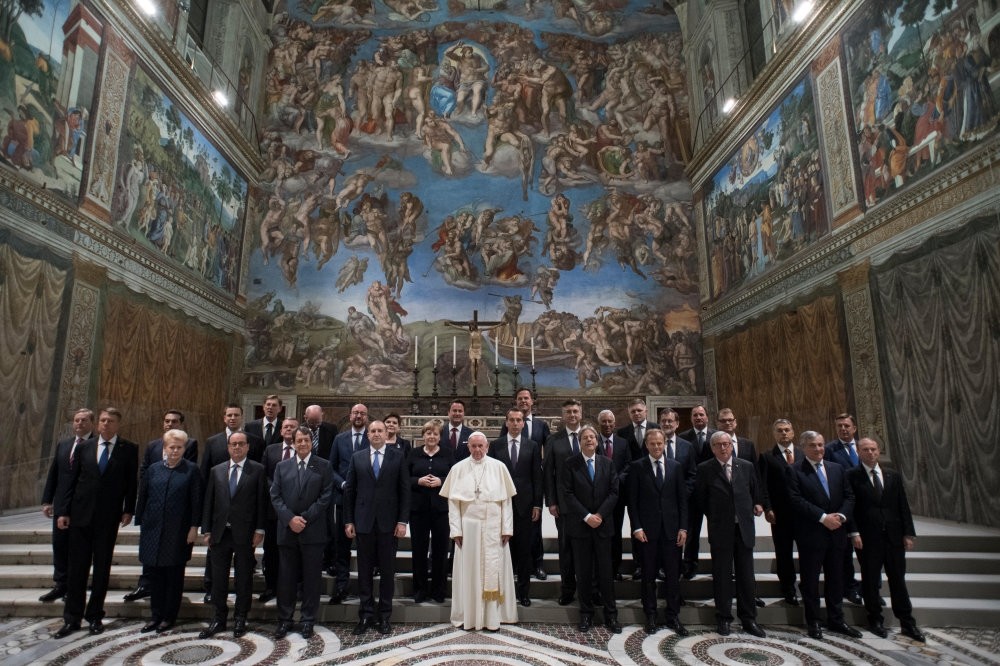 Pope Francis poses for a family picture in the Sistine Chapel after an audience with European Union leaders in Vatican, on March 24.
by Daily Sabah Apr 03, 2017 12:00 am
Prime Minister Binali Yıldırım criticized the EU and its leaders for being "non-secular" and holding a discriminative attitude towards Turkey, pointing out the EU leaders' apparent attitude in the block's 60th anniversary celebrations.

In a live broadcast on Saturday, Prime Minister Yıldırım commented on Turkey's EU accession talks and emphasized on Turkey's secular status, opposed to a perception that is being created by the EU countries.

"We will talk to the EU. We will ask [the EU] if this is a Christian club and whether or not they want to accept a Muslim country. We saw, in its 60th-anniversary celebrations, how they were all beside the Pope, like children listening to sermons," Yıldırım said.

"Contrary to the EU's attitude and regardless of its Muslim population, Turkey is a secularist and democratic country, where religious issues are never a matter for the government," the prime minister said.

Also talking about the straining of Turkey-EU relations due to the Gülenist Terror Group (FETÖ) and the PKK, Yıldırım said that there was a need for Turkey to reevaluate its relations with the EU, given many European countries were seemingly tolerating and harboring these terrorist groups and their members, despite repeated warnings.

Saying that the EU abandoned its core values regarding democracy and human rights, Yıldırım said, "We have seen banners with the PKK ringleader's [Abdullah Öcalan] photo in Frankfurt. But, security suddenly becomes a concern, when Turkey's official authorities are involved," Yıldırım said.

The prime minister also touched upon incidents regarding the 'Kill Erdoğan' poster that was recently brandished in a pro-PKK rally in Switzerland and European newspapers publishing in Turkish, to influence the "No" campaign in the upcoming April 16 referendum. He said that although European countries claim that they "do not interfere in other countries' internal affairs," they try to intervene in everything when it comes to Turkey.

"You [European countries] have to respect the Turkish nation's decisions. You should not try to influence them. You do not allow the enemies of Turkey. We do only what Turkish citizens say," said Yıldırım, while indicating that Turkey's EU accession process might also be put up for referendum.
RELATED TOPICS