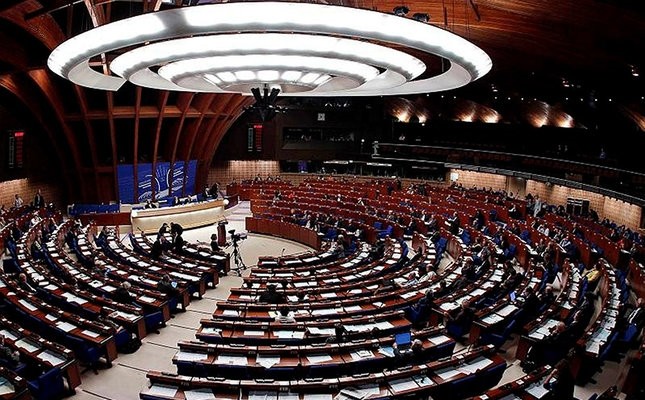 This file photo shows delegates sitting in the Parliamentary Assembly's plenary room at the Council of Europe in Strasbourg, October 7, 2010 (Reuters Photo)
by Daily Sabah Apr 20, 2017 12:00 am

Debate has grown after news surfaced that one of the observers in the joint team of Organisation and Co-operation in Europe (OSCE) and Parliamentary Assembly of the Council of Europe (PACE), who penned a report on the April 16 referendum process in Turkey, was pictured with PKK banners. Observer Andrej Hunko has said that PACE "does not consider PKK as a terrorist organization," further fuelling controversy.

In a statement released on his official website, Hunko said that the PKK is not considered to be a terrorist group by the Parliamentary Assembly of the Council of Europe.

"Following my participation in a Council of Europe election observation delegation to Turkey, AKP supporters started a delegitimisation campaign against me and are attempting to discredit me as a PKK sympathiser," he said, using an incorrect acronym for the ruling Justice and Development Party (AK Party).

"This method has also been used in recent months as justification for the mass arrests and dismissals in Turkey. Among others, Turkish Foreign Minister Mevlüt Çavuşoğlu has made comments to this effect. And yet as a former member of the Parliamentary Assembly of the Council of Europe, he knows that the PKK is not considered a terrorist organisation by the Assembly," he added.

The debate regarding the legitimacy of the report, which said that the referendum process in Turkey "fell short of international standards," started after photos of Hunko surfaced, which showed him posing with banners belonging to the PKK terrorist group. The fact that another observer, Ričardas Ramoška is allegedly a bribery convict has cast more of a shadow over the legitimacy and objectivity of the report.