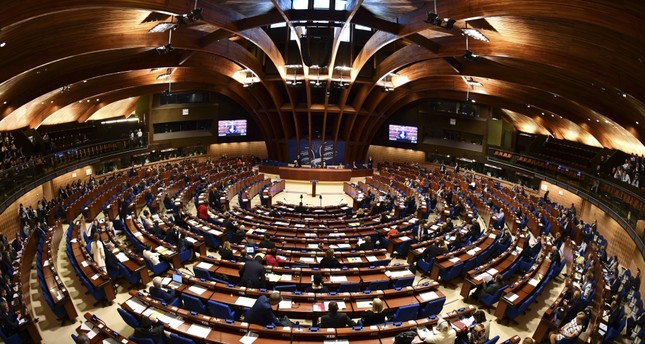 Members of PACE made a decision yesterday in Strasbourg, France, regarding the reopening of the political monitoring process against Turkey, causing significant anger in Ankara.

Turkey-EU relations are likely to further strain after PACE took a decision against Turkey on reopening the political monitoring process. Ankara strongly condemned the decision, calling it a politically motivated move and the result of an imprudent mind-set lacking strategic vision

The ParlIamentary Assembly of the Council of Europe (PACE), a top European institution, made a decision yesterday regarding the reopening of the political monitoring process against Turkey, drawing serious ire and further straining bilateral relations between Turkey and the EU. The assembly gathered Tuesday in France's Strasbourg in a session to discuss a report titled, "The functioning of democratic institutions in Turkey," during which 113 voted in favor of the monitoring decision and 45 voted against it.

During its spring session yesterday, PACE decided to reopen monitoring procedures in regards to Turkey, which has been under post-monitoring dialogue since 2004.

As Turkish-European relations have hit an all-time low; especially following the April 16 referendum on constitutional reform, the PACE decision taken against Turkey for the first time in 13 years was strongly condemned in an official statement by the Turkish Ministry of Foreign Affairs yesterday afternoon. Underlining that the PACE decision was based on political motives, the ministry said the controversial decision, "Shows an imprudent mindset-lacking strategic vision and that the common and democratic values upon which Europe is founded are ignored." While the ministry described the decision as politically motivated, other countries including Albania, Armenia, Azerbaijan, Bosnia Herzegovina and Georgia as well as Moldova, Russia, Serbia and Ukraine currently listed it under monitoring status. However, while PACE ignores Turkey's vicious failed July 15 coup attempt as well as numerous terror attacks committed not only by the Gülenist Terror Group (FETÖ) but also the PKK and Daesh terrorrist organizations, the Foreign Ministry said: "Deciding to reopen the monitoring process on Turkey, a staunch defender of contemporary European ideals and values and a founding member of the Council of Europe (CoE), under the guidance of malicious circles within PACE, is a disgrace to this body, which claims to be the cradle of democracy."

Emphasizing that the decision was influenced by "populist tendencies that fuel Islamophobia and xenophobia," the ministry's statement further added that the EU's ill-intentioned circles have been witnessed previously as well, pointing to certain PACE members who came to Turkey to observe the referendum process who were selected among sympathizers of the PKK terrorist organization. Commenting on the decision, the Justice and Development Party's (AK Party) PACE member Erkan Kandemir also stressed that the decision is politically motivated, noting that PACE's decision to reopen the monitoring process is the "peak of Europe's dilemma." While indicating that Turkey desires well-established relations with the EU and its institutions, Kandemir stressed that Turkey and the EU are a single entity, noting that "If one is affected the other will also experience the effects." Kandemir stressed that PACE's politically motivated decision is absolutely unacceptable and irrational. He also underlined that bilateral relations between Turkey and the EU will eventually be reassessed in the wake of the controversial decision.

In addition to the Foreign Ministry, Turkey's EU Minister and Chief Negotiator Ömer Çelik also condemned the decision and said the reason behind the monitoring process verdict does not coincide with Turkey's realities. Çelik noted that the "defamation propaganda [against Turkey] is saddening," adding that the PACE decision does not reveal the real picture of what is transpiring in Turkey. He also added that the PACE decision is the display of the "vicious cycle" that Europe is currently in while stressing it is "certainly against Turkish democracy." He further urged Europe and its institutions to develop an appropriate mechanism toward Turkey. International relations Professor Nurşin Ateşoğlu Güney said it was not a surprising decision for her as she said it was expected by all.

Analogous to Kandemir and government officials, Güney said it is a political decision even though the parliamentarians were supposed to be unbiased. While saying that the decision is to take Turkey back to its position in the 1990s, Güney said the decision was made with populist reasoning aiming to "protect the EU's threatened future." She also said Turkey's efforts in counterterrorism were overlooked via the decision taken. Furthermore, prominent expert on Turkish-EU relations Can Baydarol affirmed that "The decision is a political one; thus, it will not have any judicial effects." He also reminded that although relations between Turkey and the EU will likely be influenced due to the decision, he said the extent of its effects remain unknown. "One must accept that there is a clear injustice being committed against Turkey," Baydarol stressed while stating that PACE has ignored Turkey's fight against terrorism both inside its borders and abroad.