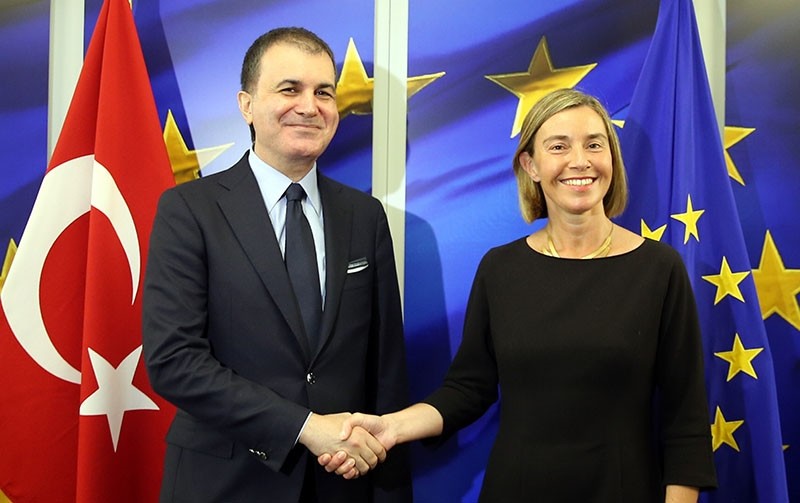 During his visit to Brussels Wednesday, the Minister for European Union Affairs and Chief Negotiator Ömer Çelik stressed that if the bloc has concerns regarding human rights in Turkey, then it should open the chapters of the EU acquis that will require the country to carry out reforms.

Speaking to the press following his meeting with EU foreign policy chief Federica Mogherini and the European Commissioner for EU Enlargement Johannes Hahn, Çelik said President Erdoğan is likely to meet with EU Council President Donald Tusk and EU Commission President Jean-Claude Juncker on the sidelines of the May 25 NATO Summit in Brussels. Following a question by Daily Sabah, Çelik said the meeting will not be a comprehensive one, but the various sides are looking to hold an EU-Turkey summit in the coming months.

In a challenge to the bloc, the minister said despite heavy counterterrorism measures taken at home and across its borders, as well as having survived an attempted military coup, Turkey protects its democratic power and capacity. "Despite all, I'm here in Brussels and I say let's open these chapters. We have the self-confidence."

Diplomatic sources told Daily Sabah that despite the anti-Turkey rhetoric fueling Germany election campaigns, opening Chapter 23 on judicial and fundamental rights and Chapter 24 on justice, security and freedoms is something that the EU will consider. Another subject to discuss is the acceleration of the expansion process of the scope of the EU's Customs Union agreement with Turkey.

Commenting on European officials' criticisms that the newly adopted constitutional amendments are not compatible with the Copenhagen criteria, Çelik said laws in Turkey are more aligned with the Copenhagen criteria than many EU member states. He said the bloc has mechanisms in place for conducting relations with member and non-EU member states, but it does not have a clear strategy for dealing with a candidate country. "As for our case, we are a candidate country that has witnessed a coup attempt and one that is fighting various terrorist groups."

Drawing attention to President Recep Tayyip Erdoğan's written statement regarding Europe Day – in which he wished Turkey and the EU to have continued EU accession talks based on mutual respect, equality and a win-win approach – Çelik said the message highlights where Turkey stands and that it was welcomed in European circles. "We aim to further improve cooperation between Turkey and the EU in areas such as immigration, economy, energy, Customs Union and membership negotiations," Erdoğan said in his statement.

When asked about EU Enlargement in Chief Hahn's recent interview, in which he said Turkey has no place in the EU and stated that "the focus of our relationship has to be something else," Çelik said Hahn told him that he is not supporting the idea of freezing Turkey's accession, but rather drew attention to the problematic points between the two sides.

During one of his previous Brussels visits, Çelik told Daily Sabah that "although he [Hahn] is responsible for matters regarding the enlargement of the bloc, Hahn instead misuses his position and acts as an Austrian political figure looking to gain support with an anti-Turkey stance."