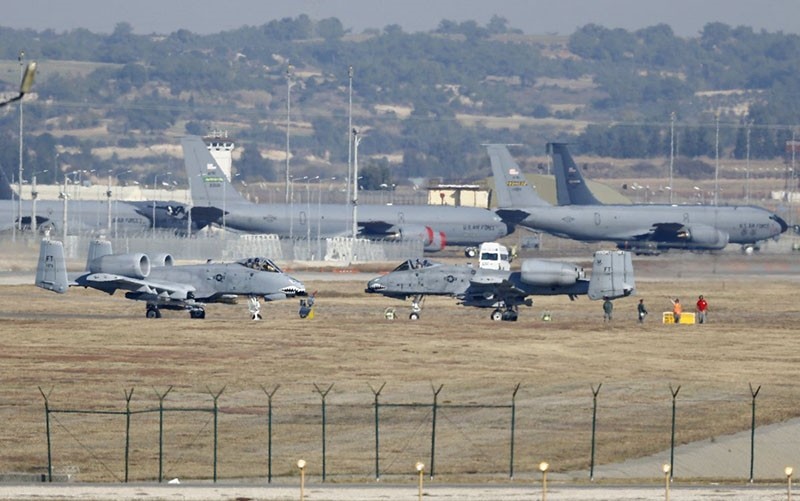 German lawmakers have been denied the right to visit Incirlik Air Base where German troops are deployed as part of the anti-Daesh coalition, diplomatic sources told Daily Sabah on Monday.

Speaking on the condition of anonymity, diplomatic sources confirmed that German lawmakers were not allowed to visit the air base to meet with German troops.

The sources said that the visit from German lawmakers was "considered inappropriate for the time being."

German lawmakers were reportedly due to visit Incirlik Air Base today but Ankara informed the German Foreign Ministry that the visit had been unanimously cancelled.

The German Embassy in Ankara told Daily Sabah that the mission had no immediate comments regarding the issue. The embassy said the matter concerns the German Foreign Ministry, which will make a statement about the issue in the coming days.

German Foreign Ministry spokesperson Martin Schäfer said Monday that the barring of lawmakers is "absolutely unacceptable" for the German government. "We must think about how it will further go in this situation," he said.

The German government is now threatening to pull out of the Incirlik Air Base in retaliation for the incident.

The head of the German Parliamentary Defense Committee Wolfgang Hellmich who was due to visit the air base told German media outlets yesterday that "concrete preparative efforts for relocation [of troops] are now being tackled."

German media outlets claim that the reason for the incident is related to the Gülenist Terror Group's (FETÖ) NATO military officers in Germany, who were granted asylum recently. The Turkish officials seeking asylum are believed to be former officers who conducted NATO missions abroad and have links to Germany where they were previously assigned by the Turkish military.

Germany has been reportedly providing shelter to 250 fugitive diplomats and soldiers with suspected links to FETÖ who are accused of being involved in the July 15 coup attempt in Turkey.

The barring of German lawmakers from visiting the air base is not the first incident of diplomatic crisis between the two countries. The Turkish government previously prevented a German delegation that included Ralf Brauksiepe, deputy for German Defense Minister Ursula von der Leyen, from visiting the air base along with German lawmakers in July 2016.

At the time of the incident, Turkish Foreign Minister Mevlüt Çavuşoğlu said, "This is the essence of the issue. If a technical military team wants to come from Germany when there are already German troops deployed here, [Ankara] does not consider it appropriate for the rest of the delegation to come."

German Defense Minister Leyen was later allowed to visit German troops at the air base.

Germany has about 250 soldiers stationed at the base in southern Turkey, along with six Tornado reconnaissance jets and a refueling plane, all of which are participating in a U.S.-led air campaign against Daesh militants in Iraq and Syria.

Ankara and Berlin disagree on several issues, including the fight against the PKK terrorist organization and the Gülenist Terror Group (FETÖ). At a joint press conference held with Chancellor Merkel in February, President Recep Tayyip Erdoğan criticized German authorities for their lack of a speedy process in the extradition of the FETÖ members being sought by Turkey.

President Erdoğan is expected to hold a meeting with Chancellor Merkel at the NATO Leaders' Summit later in May. It remains unclear whether the extradition of FETÖ fugitives and the ban on the visit by German lawmakers will be brought up in the meeting.