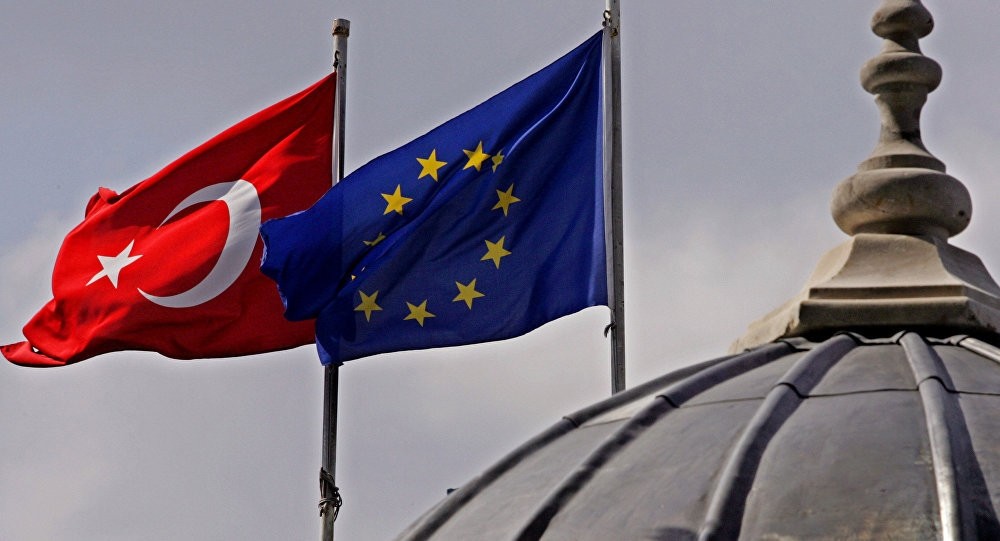 Begininng in the early 1960s, the nearly six-decade-long negotiations on Turkey's accession to the 27-member bloc still continue.
by Mehmet Çelik Jun 01, 2017 12:00 am

After a long period of stalled ties in Turkey-EU relations, experts argue that both parties now show willingness to ease tensions and focus on mutual bilateral interests

After a period of stalled relations between Turkey and the EU, particularly strained after the July 15 coup attempt last year, recent political statements emanating from Ankara and Brussels have toned down the tensions in bilateral ties. Experts have argued that the rigidity has eased as both sides have shown willingness to repair relations through the re-launching of talks on key issues between Turkey and the EU. On May 25, President Recep Tayyip Erdoğan paid an official visit to Brussels to attend the NATO leaders summit, where he met with EU officials including newly elected French President Emmanuel Macron.

Erdoğan met with European Council President Donald Tusk and European Commission President Jean-Claude Junker on the sidelines of the summit. The president also met with European Parliament (EP) President Antonio Tajani. Ties between Brussels and Ankara have been strained over several issues; namely, the EU's failure to keep promises regarding providing financial support to Turkey for the humanitarian assistance it provides to Syrian refugees, the migrant exchange deal and the granting of visa-free travel for Turkish citizens to the Schengen zone, since early last year.

In addition, Ankara claims that there is a discrepancy between the EU's political rhetoric and policy execution in the scope of its stance against the activities of the PKK terrorist organization across EU cities, their position against the Gülenist Terror Group (FETÖ) members, as well as not showing timely support to Turkey after the failed July 15 coup attempt.

Aside from these, of course, there is the nearly six-decade-long negotiations on Turkey's accession to the 27-member bloc, which began in the early 1960s.

Speaking on the short-term outlook of Turkey-EU ties, Can Baydarol, an expert on Turkish-EU relations, said that despite some tension, both parties know the importance of their mutual interests.

"A positive atmosphere is a necessity between the parties for the future. Despite disagreements, both parties say, 'let's move on and look towards the future.'"

However, Ankara still argues that Turkey does not receive support in its fight against the PKK terrorist organization and the Gülenist Terror Group (FETÖ). Particularly, the free movement of PKK sympathizers across some EU cities and the holding of rallies, despite the PKK being listed by the EU as a terror organization, has angered Ankara. Similarly, Turkey argues that some EU countries have become a safe haven for FETÖ members fleeing the country as a result of their activities after the failed July 15 coup attempt against the Turkish government. FETÖ, led by its U.S.-based leader, Fetullah Gülen, attempted to overthrow the government during the coup attempt but had failed when the Turkish people took to streets and stopped the putschists. A total of 249 people were killed and more than 2,200 people were injured.

Commenting on the issue regarding the EU's demands from Turkey regarding EU membership; namely, the loosening of Turkey's terror laws, Baydarol says that Turkey might make some changes as part of the new calendar and in return, the EU may also grant visa-free travel for Turkish citizens to the Schengen-area.

In addition, Baydarol said that the EU-Turkey Customs Union agreement will also be updated with new sectors being included, such as agriculture, the service industry and public tenders.

The EU and Turkey are linked by a Customs Union agreement which was put into action on December 31, 1995. The agreement includes only industrial products at the moment. It is expected that with the inclusion of new industries, Turkey will significantly enhance its trade with the EU by more than 20 billion euros, in return for the EU's expansion into the Turkish market.

Erdoğan's meeting with Junker also addressed the steps that should be taken towards updating the Customs Union agreement and Ankara expects the EU to begin meetings on the changes soon.

"The EU is also undergoing changes and making decisions on its future. It must discuss and decide how Turkey will be included in its future and the new integration period," Baydarol added.

Bora Bayraktar, an academic in the International Relations Department at Istanbul Kültür University, says that although significant positive developments should not be expected in the near future, the fact that the tensions are now lowered is in itself a positive development.

"Turkey and the EU have shown willingness to work together and discuss their disagreements. This will allow them to take a breath and re-evaluate their positions for future developments. In a way, it is a means of showing cautious optimism by both sides," Bayraktar said.

Bayraktar also adds that if the EU fails to take steps to ease Turkey's anger, it would be difficult to maintain this optimism.

Earlier in May, Erdoğan said that Brussels had no other "option" than to open new "chapters" in Turkey's long-stalled EU accession process, which began in 2005.

Meanwhile, the migrant deal is another disputed issue that Ankara argues needs to be solved. Turkey and the EU signed a refugee deal in March 2016 which aims to discourage irregular migration across the Aegean Sea by taking stricter measures against human traffickers and improving the conditions of the nearly 3 million Syrian refugees in Turkey. The deal included a 6-billion-euro aid package to help Turkey care for the millions of refugees hosted in the country. Despite the promise made, Ankara has said that only about 700 million euros have been delivered. The promise of an acceleration of Turkey's EU membership bid and visa-free travel for Turkish nationals within the Schengen-area have also not been kept by the EU.

After the visit to Brussels, President Erdoğan said that a new 12-month long agenda had been discussed with the EU officials to speed up the Turkey-EU negotiations on opening new chapters, while Ankara has also voiced that visa-free travel is the priority at the moment.

Deputy Prime Minister Numan Kurtulmuş said on Monday that Turkey aims to enhance relations with the EU in the scope of full membership. "Turkey wants the negotiation process to continue by opening new chapters," he said in Ankara after a Cabinet meeting.

Both President Erdoğan and the government in Ankara have softened their tone that had grown strained particularly after the July 15 coup attempt.

After Erdoğan's visit to Brussels and meetings with EU officials, presidential and diplomatic sources said that a positive atmosphere was maintained during the meetings.

Turkey has fulfilled 65 of the 72 articles put forward by the EU as part of the dialogue on visa liberalization, part of the readmission agreement signed on December 16, 2013.

The EU Commission's May 4, 2016 report indicated that Turkey had taken steps to meet two out of seven remaining articles. Among the remaining seven articles, the EU's demand from Turkey to change its counterterror laws remains as the most contentious one between the two sides. While the EU's counterterror unit the Committee of Experts on Terrorism (CODEXTER) has acknowledged that Ankara has taken steps towards ensuring that it maintains democratic values in 2013, Turkey argues that it is fighting with several terror groups simultaneously, including Daesh, the PKK and the radical leftist group DHKP-C, and that the EU's re-evaluations should take into consideration the country's struggle against terror, in order to avoid putting Turkey in a weak position against terror.