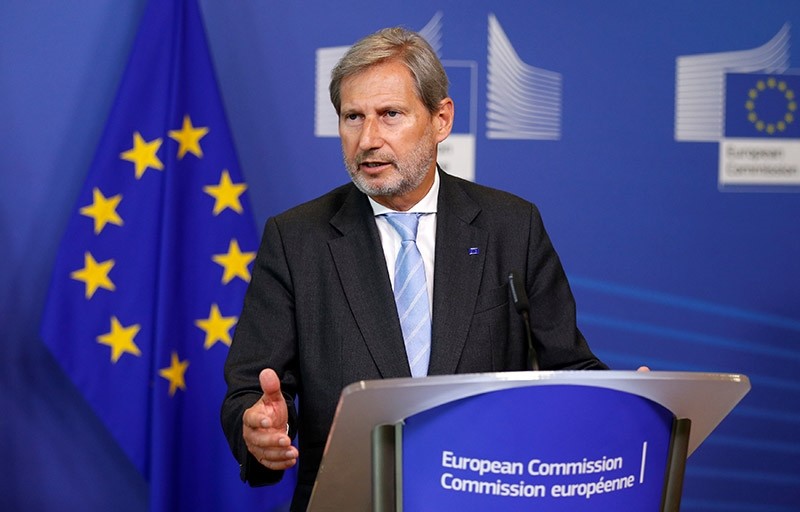 The European commissioner for neighborhood policy and enlargement negotiations, Johannes Hahn, is expected to visit Turkey on July 6, amid efforts to rejuvenate relations between Ankara and the EU, which have become increasingly strained in recent years.

The European Union delegation to Turkey announced yesterday that Hahn's visit would be a follow-up of the meetings conducted between the EU and Turkey during the NATO summit in Brussels on May 25.

The agenda of the meeting will focus on Turkey's importance to the EU, the statement added.

The agenda of the meetings included issues like the migrant deal signed between Turkey and the EU, the fight against terrorism, the ongoing Cyprus issue and Turkey's long-stalled EU accession process.

Meanwhile, speaking to BBC Turkish on condition of anonymity due to restrictions on talking to the media, an EU spokesman said that the future of Turkey's accession talks with the EU depends on the steps that Ankara takes or does not take. The source said that developments on human rights and the superiority of law will determine the future of talks

Erdoğan said his meetings with Tusk and Juncker before the NATO summit on accelerating Turkey's membership process were encouraging, as the leaders discussed the EU-Turkey deal on refugees, and asked for the bloc's support in Ankara's fight against terrorism.

He especially emphasized Juncker and Tajani's reassuringly warm stance toward Turkey and their interest in improving ties.

Ties between Brussels and Ankara have been strained over several issues, namely Ankara accusing the EU of failing to keep promises regarding providing financial support to Ankara for the humanitarian assistance it provides to Syrian refugees, the migrant exchange deal and the granting of visa-free travel for Turkish citizens to the Schengen zone.

Erdoğan also said last month that Turkey has no intention of completely ending the accession talks with the EU, adding, however, that the bloc can make such a decision if it is considering such a move.

The association agreement between the EU and Turkey began in 1963 when Turkey and the European Economic Community (EEC) signed the Ankara Agreement, also known as the Agreement Creating an Association. It is an agreement aimed at Turkey's accession to the EEC and later paved the way for accession talks with the EU.

Ankara applied for EEC membership in 1987 and accession talks began in 2005. However, negotiations hit a stalemate in 2007 because of disagreements on the Cyprus issue. The German and French governments have been opposed to the country's full EU membership.

Only 16 policy chapters have been opened out of a total of 35 since negotiations began 54 years ago. The latest, Chapter 33 on financial and budgetary provisions was opened in accession talks.

Turkey's EU Minister Ömer Çelik previously called on the EU to unblock Chapter 23 on judicial and fundamental rights and Chapter 24 on justice, security and freedoms for Ankara's accession talks.

Meanwhile, the EU's official EU Delegation to Turkey Twitter account shared a tweet yesterday commemorating World Refugee Day. "Turkey is hosting the largest number of refugees in the world since 2011. #EU proud to support this effort", the tweet said.

Turkey is the most generous country in the world in terms of opening its doors to people from war-stricken countries. More than 3 million refugees are currently in the country, mostly having fled the violence in Syria and its civil war. According to Turkish government figures, the country has spent around $25 billion in total on the crisis.