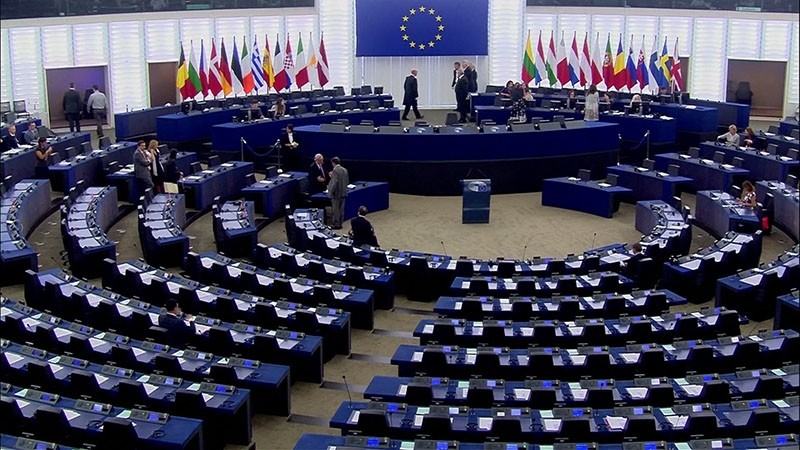 As Turkey prepares for the high-level G-20 summit amid attempts to mend sour ties, the EP has approved a report calling for the suspension of Turkey’s EU bid. Meanwhile, Ankara said it will return the report that it says is an attempt to ‘sabotage’ recent accession talks

The European Parliament has adopted the annual report of Turkey rapporteur Kati Piri, suggesting the suspension of accession talks with Turkey. Ankara says the vote, which is not legally binding, is an attempt to sabotage the recent positivity surrounding talks between the EU bloc and Turkey.

Lawmakers on Thursday approved the report, voting 477 to 64 in favor while nearly 100 members of the EP abstained in the vote. Turkey's Minister of EU Affairs Ömer Çelik criticized the decision, calling it null and void while vowing that Turkey will return the report.

Turkey will reject any proposal by the EU to drop accession talks in favor of cooperation in other areas and will continue to maintain the accession process, Çelik said prior to a meeting with Hahn.

"The backbone of the relationship between Turkey and the EU is accession negotiations," he said, adding that Turkey will continue to strive to open more chapters in negotiations.

Among other things, the report calls on EU member states to "formally suspend accession negotiations with Turkey without delay if the constitutional reform package is implemented and unchanged." This is a reference to the collection of wide-ranging constitutional proposals approved by the Turkish electorate in April.

Minister Çelik said such demands can only be described as disrespect to the will of the Turkish nation.

"The referendum was so transparent and the [Turkish] people made their decision with high voter turnout. What is being asked of Turkey is that we play deaf to the will of the people. The outcome of the referendum will be implemented. The EP has no right to make such demands. We call on them to respect the referendum results," he said.

While the report calls on EU institutions to suspend pre-accession funding if negotiations are suspended with Turkey, it also has political demands for Turkey in exchange for the expansion of the scope of the Customs Union Agreement.

The Turkish minister reacted by saying this is the "wrong call," noting that revising the agreement is desired by both sides. The European Commission has officially been authorized to revise the Customs Union Agreement with Turkey. EU member states transferred negotiative authority to the European Commission to expand the scope of the agreement signed in 1995 with Turkey. It is expected that both sides will begin negotiations at the start of 2018.

Rapporteur Piri's report calls for a formal ban on the use of PKK symbols in EU member states, the majority of which have shown high tolerance for the activities of the terrorist organization in the bloc. Çelik asserted that the ban is a "positive step" and called for the EP to first stop allowing pro-PKK exhibitions and conference being held in halls across Europe.

In regards to criticism surrounding the arrests of Gülenist Terror Group (FETÖ) suspects and the state of emergency, Çelik asserted that Turkey's fight against the putschist group is legitimate and in accordance with the rule of law, noting, "The EP has failed to support Turkey in the wake of the military coup attempt and in the prosecution of the perpetrators."

Çelik said the report is far from being objective, pointing to remarks related to the 1915 events, which accuse the Ottoman Empire with committing genocide. Turkey dismisses allegations of genocide but acknowledges there were casualties on both the Ottoman and Armenian sides during the events of World War I. He said the report takes the claims of Armenians and portrays the allegations as if they were facts.

Turkey-EU agenda will be busy in coming weeks

"The talks will focus not only on the lifting of visa requirements but also on the aid package for refugees sheltered in Turkey," President Erdoğan said.

Minister Çelik will visit Brussels next week to hold talks with EU officials and is expected to return to Brussels again on July 25, accompanied by Foreign Minister Mevlüt Çavuşoğlu to hold high-level meetings.

"We plan to deepen the dialogue on such issues like visa-liberalization, migration, the Customs Union Agreement and counterterrorism efforts. The most important task for today is tearing down walls and building bridges," he noted.