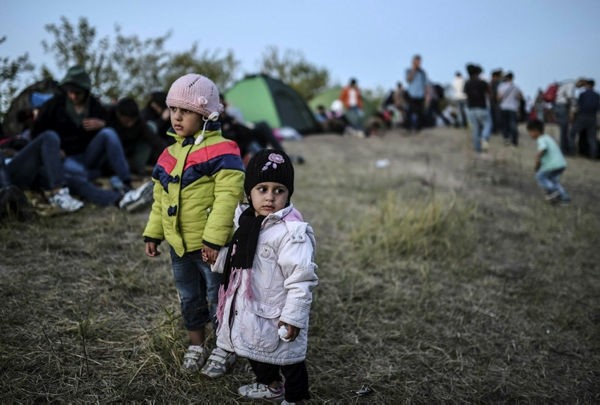 Bulgaria has decided to increase its border security measures in order to prevent illegal migration from Turkey, Bulgarian Defense Minister Krasimir Karakachanov said in an interview published on Thursday.

Speaking to the Die Welt daily of Germany, Karakachanov said that more soldiers will be deployed to the Turkish-Bulgarian border in order to provide security and the Turkish border will also be divided into five parts in order to monitor the area more conveniently.

Saying that each part on the Turkish border will have its own armored troop of soldiers, Karakachanov indicated that there will be 600 soldiers in total along the border, some of whom will be specially trained. The minister further expressed that according to their previous experiences, the soldiers are more effective in border security than the police forces. Besides, he added, illegal migration movements will be monitored through security cameras and drones all along the border.

"We cannot overlook the flow of illegal migrants to Europe anymore," Karakachanov said, criticizing European countries for not closing down the migration route in the Mediterranean.

"NATO or EU troops should be deployed in Greece and Italy to protect the EU's external borders via force, in case of necessity," he further added, while defending that most of the people who migrate to Europe through Mediterranean are economic migrants. "They did not face any prosecution; they do not need any protection of their lives. They just want to live in a rich Western country."

Karakachanov is the leader of the Bulgarian National Movement (VMRO) and one of the three leaders of the nationalist bloc United Patriots that entered in a coalition with Prime Minister Boyko Borisov's ruling Citizens for European Development of Bulgaria (GERB). Last year, running for president, he called for migrants to be stopped at the borders with "batons, tear gas and water cannons".

The VMRO also sees Macedonians as Bulgarians. All three parties have their own television channels, broadcasting a mix of Kremlin propaganda, reportages about thieving Roma and folk music and traditions.

Before the March 2017 elections, members of the anti-Roma National Front for the Salvation of Bulgaria (NFSB), another UP party, and the VMRO blockaded Bulgaria's border with Turkey to stop "agents" sent by Ankara coming to vote. More than 200,000 ethnic Turks with Bulgarian passports reside in Turkey.

The number of migrants who have died or gone missing in the Mediterranean this year has climbed above 2,000, the U.N.'s International Organization for Migration (IOM) said in a statement last month. Since the inflow of refugees and migrants started in 2013, nearly 15,000 migrants have lost their lives trying to reach Europe by boat, an average of 10 every day. In the first half of this year, nearly 84,000 migrants reached Europe after crossing the Mediterranean, most of them arriving in Italy.