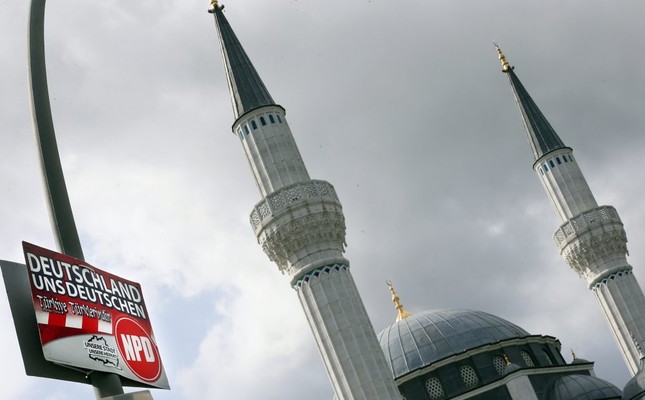 A placard of the German far-rıght ‘Natıonal Democratıc Party of Germany' (NPD) seen front of a mosque in Berlin, Aug. 10, 2016. The placard reads: ‘Germany for Germans' and adds ‘Turkey for Turks' in Turkish.

With less than a month left for the upcoming elections in Germany, the country's Turkish community is indifferent and face a lack of alternatives after existing political parties embraced an anti-Turkey rhetoric as a part of their election campaign

German-Turks are alienated from politics amid the growing anti-Turkey discourse from political parties with less than a month remaining until the upcoming elections. According to official statistics, around 700,000 Turkish-origin Germans are eligible to vote in the elections scheduled for Sept. 24, which will determine the next chancellor of Germany. While current Chancellor Angela Merkel seeks victory for a fourth consecutive term, the diplomatic spat with Ankara, which notably peaked after the July 15 coup attempt in Turkey for several reasons, reportedly put distance between German-Turk voters and Merkel's Christian Democratic Union (CDU). 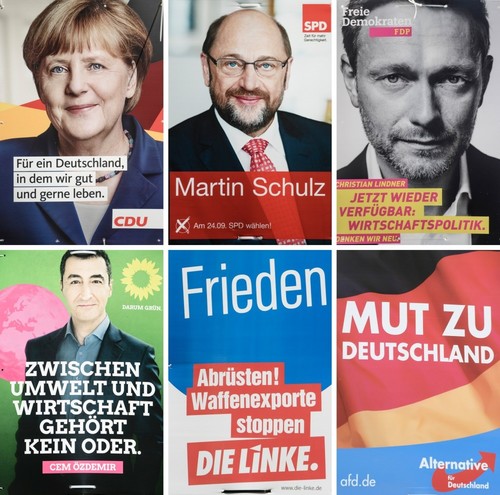 Posters of German parties participating in next month's federal elections. Rhetoric party officials have used in the run up of the elections has alienated the Turkish community.

Tensions between Ankara and Berlin have increased as Turkey blames Germany for turning a blind eye to activities within its borders by groups considered to be terrorist by Turkey, including the PKK, which is listed among the outlawed groups by the U.S. and EU, as well as the Gülenist Terror Group (FETÖ). German politicians have criticized Ankara for the detention of a German national as part of anti-terrorism investigations and operations. Merkel and other German politicians recently said that the EU customs union agreement should not be updated with Turkey, while Turkish officials responded that the customs deal is being used as a political tool against Turkey.

The alienation of German-Turk voters is not confined to the CDU, as some have allegedly also turned their backs on another major player in the German political arena, the Social Democratic Party (SPD), which has traditionally received supported from them.

The election of former European Parliament President Martin Schulz as SPD chairman was a main reason for the lowering view of German-Turk voters to the party. Schulz's harsh rhetoric on Turkey before the elections is not likely to close the gap as the SDP is about 16 percentage points behind the CDU in the latest survey by German state broadcaster ARD.

Research by the Expert Council of German Foundations on Integration and Migration (SVR) found that German-Turk voters mostly cast their ballots the SPD in past elections.

Speaking to Anadolu Agency (AA), Kenan Kolat, a Turkish representative of a nongovernmental organization for multi-cultural living in Germany, said that the SPD won the election in 2002 by receiving just 6,227 more votes and German-Turk voters' choice was determinant in this result.

European Turkish Democrats Union Deputy Chairman Asiye Bilgin told AA that the SPD has developed right-wing rhetoric, adding that conservative Turkish-origin voters in particular have moved away from the SPD because of this.

Bilgin said a perspective is created that suggests the German-Turk minority is acting contrary to Germany when they support Turkey's interest. "I do not think that this attitude of the SPD will change after the elections in Germany. They are talking about the termination of dual citizenship, and even this is a sign that assimilation policies will be institutionalized. A difficult process is ahead for Turks," she said.

Foreign Minister Mevlüt Çavuşoğlu warned Germany on Friday about "crossing the line" ahead of general elections in the country, shortly after German Foreign Minister Sigmar Gabriel told a news outlet that Turkey will never be a member of the European Union as long as President Recep Tayyip Erdoğan is in power.

"Germany must be careful how it conducts foreign policy with Turkey," Çavuşoğlu said in Poland, and added that a populist approach is not the answer to solve ongoing problems between the two countries.

No alternatives in opposition

Apart from the ruling CDU and SDP, Germany's opposition parties also have embraced harsh rhetoric on Turkey. The co-leader of Germany's Green party, Cem Özdemir, went so far as to call for a ban on teaching the Turkish language to students in Germany by Turkish teachers in an interview with the Zeit newspaper.

Özdemir cited Turkish teacher's attitude against "questions related to religion" when he was a student to support his statement.

"When I was a student, Turkish teachers were requested to not ask too many questions about the state and religion in the Turkish lessons I attended," he said, adding that he was a "lazy migrant" student, but he built his career with the contributions of good teachers.

Known for its staunch hostility against migrants and minorities in the country, the far-right Alternative for Germany (AfD) previously issued numerous statements against German-Turks in the country and called for anti-migrant and anti-minority measures such as abolishment of dual citizenship.

German-Turk voters are also unsympathetic to the opposition Left party due to its lawmakers' support for the PKK, which is designated as a terrorist group by Turkey, the EU and U.S. Left lawmaker Andrej Hunko, who was as an observer for the Parliamentary Assembly of the Council of Europe (PACE) in the April 16 referendum in Turkey, faced strong criticism from Turkish officials after photos showed that he had previously attended demonstrations held by the PKK.

Erdoğan last week called on the German-Turk community in Germany to not vote for parties that "have a hostile stance on Turkey" in the upcoming elections, including the CDU and the SPD.

"I call on fellow Turks in Germany not to vote for the CDU or the Greens, which are all hostile to Turkey. Support those who are not enemies of Turkey," he said, adding that these parties should be "taught a lesson" at the ballot box in the upcoming elections.

Former European Parliament member and Daily Sabah columnist Ozan Ceyhun recently commented to Daily Sabah on German-Turk voters' possible stance in the upcoming elections, saying that the best option for them is to boycott the elections.

"They can choose to support a candidate who they may think is the best option for their community. However, the best option seems to be boycotting the elections in the face of such a heightened anti-Turkey stance."

Share on Facebook Share on Twitter
Previous in EU Affairs Stressing that the Republic of Turkey and President Erdoğan are indispensible,... Next in EU Affairs Despite the tightened travel instructions of the German Ministry of...
DAILY SABAH RECOMMENDS