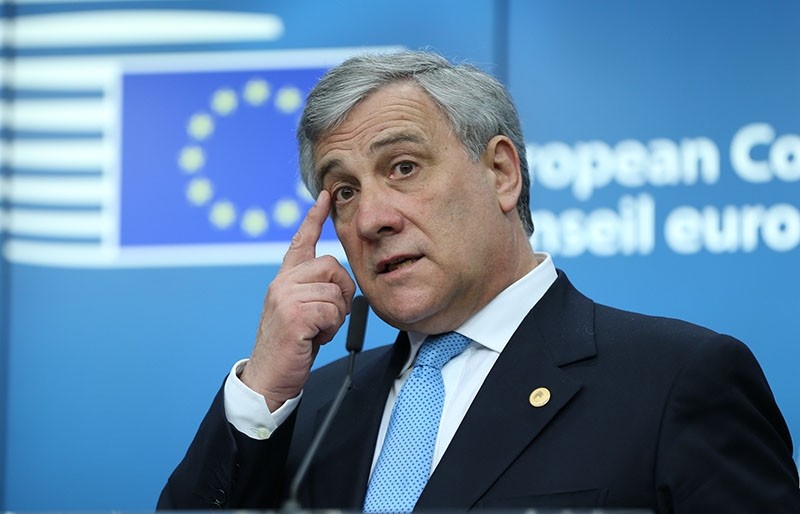 Despite calls by German politicians to end Turkey's EU accession negotiations, European Parliament (EP) President Antonio Tajani said, "The dialogue must be open because we have the problem of migration and the fight against terrorism. We need to keep on talking and push Turkey to change its line."

Tajani's words came days after the EU's foreign policy chief stressed that Europeans "tend to forget that Turkey is a key player in a region that is strategically important for us."

Speaking to Brussels-based Politico EU magazine, Tajani said the EU should end Turkey's membership talks on only one condition: If Ankara brings back the death penalty. "It's very difficult today for Turkey to get into the EU, but we cannot close the chapter," he said. Tajani took a different stance than the parliament that elected him as president in January. In protest of the decision of Turkish citizens to vote in favor of the consitutional changes in governance, EP lawmakers voted to freeze Turkey's accession bid - a non-binding decision.

On Sunday, German Chancellor Angela Merkel said, "Turkey should not become an EU member," a line strongly shared by her rival for the German chancellorship, Martin Schulz. Merkel said during an televised election debate that she doesn't "see a mandate to expand the Customs Union [Agreement with Turkey] under the current circumstances."

The deal, which the EU offered Turkey, aims to further develop the trade volume between the two sides. Regarding the potential upgrading of the Customs Union deal, Tajani said: "It depends on how the situation evolves. ...if there's a negative or a positive evolution."

EU Foreign Policy Chief Federica Mogherini also took the same position, saying the accession talks with Turkey will continue. Speaking at the 2017 Bled Strategic Forum, Mogherini said: "We are not always agreeing on everything. There are some issues. ...that are taking our positions very [far] apart, but talks continue," she added. Mogherini noted that despite the challenges that have arisen and made the work between the two sides become difficult, "dialogue continues [and] work on [membership] negotiations continues."

Describing the latest Turkey-EU High-Level Political Dialogue in late July in Brussels as "good talks," Mogherini said that Turkey's geopolitical position is an important asset for the EU. "We always focus on EU-Turkey relations in the context of accession negotiations, and this is understandable. Also, sometimes we tend to forget that Turkey is a key player in a region that is strategically important for us: the Middle East and the Mediterranean."

She added that Turkey is a country "with which we are working on some files that are fundamentally strategic for both us and them, from counterterrorism to the Cyprus issue to Syria."

Regarding more discussions on negotiations following the Sept. 24 elections in Germany, Mogherini said: "In the future, I would suggest that we look beyond what is said during electoral campaigns both in Turkey and the EU. And, I am looking forward to the moment when we sit together at the table and find what is going to be the future of our relations."