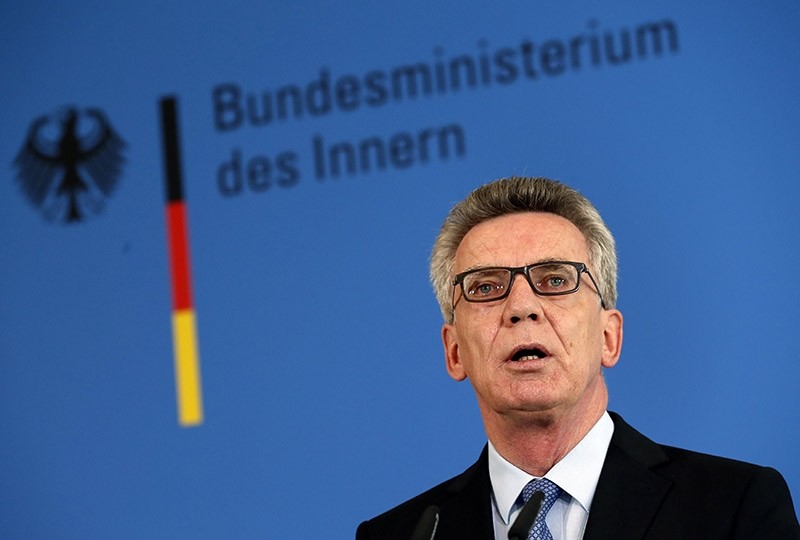 German Minister of the Interior Thomas de Maiziere speaks during a news conference about the riots related to the G20 Summit in Hamburg last week, in Berlin, Germany, 10 July 2017. (EPA Photo)
by Daily Sabah with AA
Sep 11, 2017 12:00 am

"These numbers also include family members of the diplomats and service passport holders," he added.

De Maiziere gave no details about the professions of these asylum-seekers, but government officials told local media earlier that ex-soldiers and former diplomats were among them and that most were accused by the Turkish authorities of having ties with the Gülenist Terror Group (FETÖ), which orchestrated the deadly coup attempt.

A total of 250 people, consisting of mostly civilians, were killed by pro-coup soldiers, while over 2,000 people were injured.

Several ex-soldiers and former officials with suspected FETÖ ties also came to Germany from neighboring countries or Turkey, and applied for asylum.

Despite repeated requests by Ankara to return FETÖ suspects to Turkey for trial, the German authorities have so far turned down such requests, arguing that Ankara must first provide sound legal evidence.

De Maiziere said on Monday that each asylum application is evaluated by the German authorities on its own merits, based on the rule of law and applicable legislation.

Unconfirmed reports say that about 4,000 FETÖ suspects left for Germany after the coup attempt

Media linked to FETÖ claim that the terror group has around 70,000 followers on German soil.

Germany's uncooperative stance with regard to FETÖ has been a source of recent tension between Ankara and Berlin.

Gülenists in Germany have taken care not to attract public criticism and have particularly focused on interfaith dialogue programs, giving moderate messages to win the trust of the media, influential churches, and political institutions.