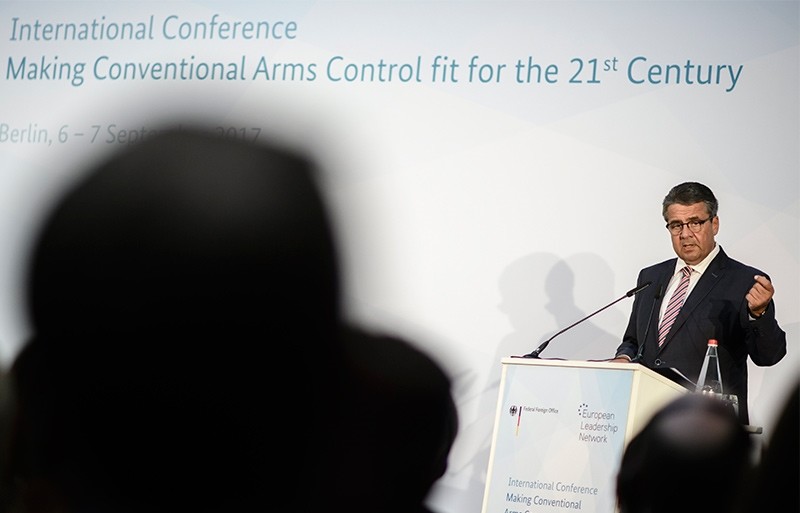 Demands of freezing German arms export to Turkey has sparked a new debate within the German government after a Green Party and Social Democrat Party (SPD) push to end exports was opposed by German Chancellor Angela Merkel's Christian Democrats (CDU).

The demand to suspend arms exports to Turkey came from the Green Party in an effort to increase Berlin's pressure on Ankara. Green Party lawmaker of Turkish origin Özcan Mutlu recently said that weapons sales to Turkey must end immediately and claimed that as exports continue without disruption, Turkey disregards Germany's warnings.

Replying to a parliamentary question by Mutlu on arms exports to Turkey, the government said that according to German Economy Ministry data, Germany approved 25 million euros in arms sales to Turkey since the beginning of this year.

Earlier, German Foreign Minister and SPD lawmaker Sigmar Gabriel, in an interview with the German business daily Handelsblatt, said applications for arms exports to Turkey have been put "substantially on hold." He cited recent tensions with the Turkish government as the reason behind the decision.

"We have suspended Turkey's applications regarding arms export, the number of which is not low at all," he said.

Speaking to German broadcaster NDR, Merkel said Monday that she opposes the calls for imposing a weapons embargo on Turkey.

"Arms sales to Turkey should not be completely stopped," Merkel said and added that more intense travel advice should not be enforced on travelers to Turkey and channels of dialogue should be kept open.

The Foreign Minister has stressed that other exports, which need to comply with international conventions and are not related to weapons, have not been suspended.

Meanwhile, voicing his opposition to the demands of ending arms exports to Turkey, Jürgen Hardt, the parliamentary foreign policy spokesman for Merkel's Christian Democratic Union (CDU), has stated that Turkey's demand for arms needs to be examined in an amicable way in line with solidarity within NATO. He also underlined that any other implementation except this would put Germany's security at risk and would lead to the weakening of NATO. Hardt made the remarks in an interview with another German daily Neue Osnabrücker Zeitung.

Highlighting that Turkey and Germany cooperate in counter-terrorism, Merkel also said that Germany must work with Turkey, as a NATO ally, for Germany's security.

Responding to the German foreign minister's comments, Turkey's EU Minister Ömer Çelik said Gabriel has to be more careful when he makes such remarks.

The EU minister underlined that weakening Turkey's counter-terror efforts will also directly affect the safety and security of the EU's borders, as well.

"Terror groups such as Daesh and the PKK are now active across EU capitals. This should not be forgotten: With this effective struggle Turkey is protecting its borders. However, at the same time it protects the security and borders of the EU," Çelik said.

In Turkey, on the other hand, main opposition Republican People's Party (CHP) leader Kemal Kılıçdaroğlu addressed the issue in a televised interview Monday.

"We are in a sensitive region, here we need to build our own defense systems. We do not approve this kind of embargo," he said.

Besides the recent debate on arms export, Turkey-Germany ties have been strained over a range of issues. Germany has claimed that Turkey was moving away from European values while authorities in Ankara have claimed that that the German government's hard-line approach against Turkey was due to the upcoming German elections.

In line with that policy, German Chancellor Merkel and her main rival Schulz called for an end to Turkey's EU membership negotiations in a recently televised political debate. The remarks, however, drew criticism from both inside the European Union (EU) and Turkey.

In reply, Turkey stressed that Germany cannot single-handedly influence such an important issue and act on behalf of the EU. EU Foreign Policy Chief Federica Mogherini said talks with Turkey were ongoing even though the sides did not agree on every single issue.