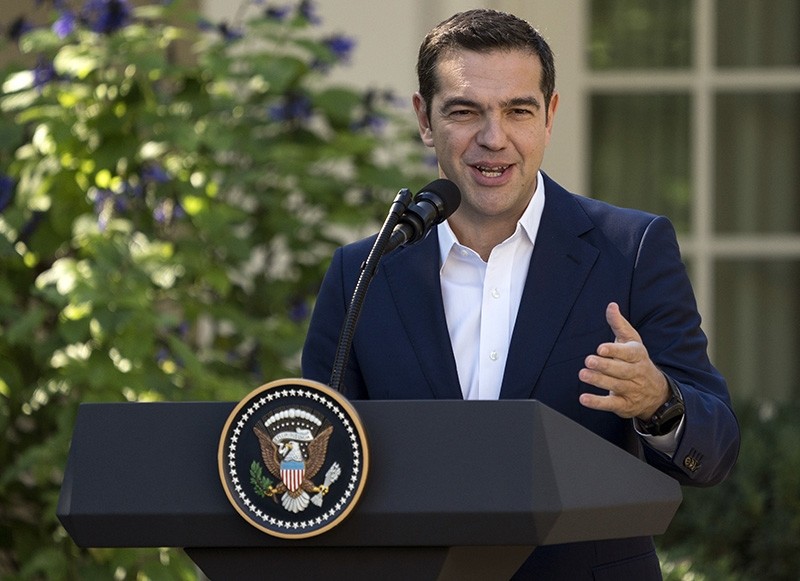 Greek Prime Minister Alexis Tsipras speaks during a news conference with President Donald Trump in the Rose Garden of the White House in Washington, Tuesday, Oct. 17, 2017. (AP Photo)
by Daily Sabah with Agencies Oct 17, 2017 12:00 am

Greek Prime Minister Alexis Tsipras said on Tuesday it was important for Turkey to remain part of the NATO security alliance and continue its orientation toward Europe despite current tensions between the two countries.

"We continue to support the Turkish course toward Europe," Tsipras said at a White House news conference after a meeting with U.S. President Donald Trump. "We respect it as a regional power and we believe that it must stay oriented toward the European perspective."

Relations between Ankara and European capitals have been strained since the Gülenist Terror Group (FETÖ)-led coup attempt in Turkey last year. Turkish officials criticized European countries for failing to show solidarity with the government against the coup attempt and offering asylum to Gülenist coup plotters.

Ankara applied for EEC membership in 1987 and accession talks began in 2005. However, negotiations hit a stalemate in 2007 over disagreements on the Cyprus issue. The German and French governments have been opposed to the country's full EU membership.

Tsipras' comments came after he met with President Trump at the White House in a meeting that allowed the country's prime minister to brush aside rough comments he made about Trump during the 2016 campaign.

Greece, a member of the U.S.-led NATO alliance, has been under a series of international rescue loans since 2010 amid a protracted economic crisis.

The Washington-based crisis lender is one of Greece's main creditors, along with the IMF's European partners.

The IMF has pushed for Greece to receive debt relief, which European institutions have resisted. Representatives from the IMF and European Union are due next week in Athens to review the progress of reforms under the current bailout package, which expires in August 2018.