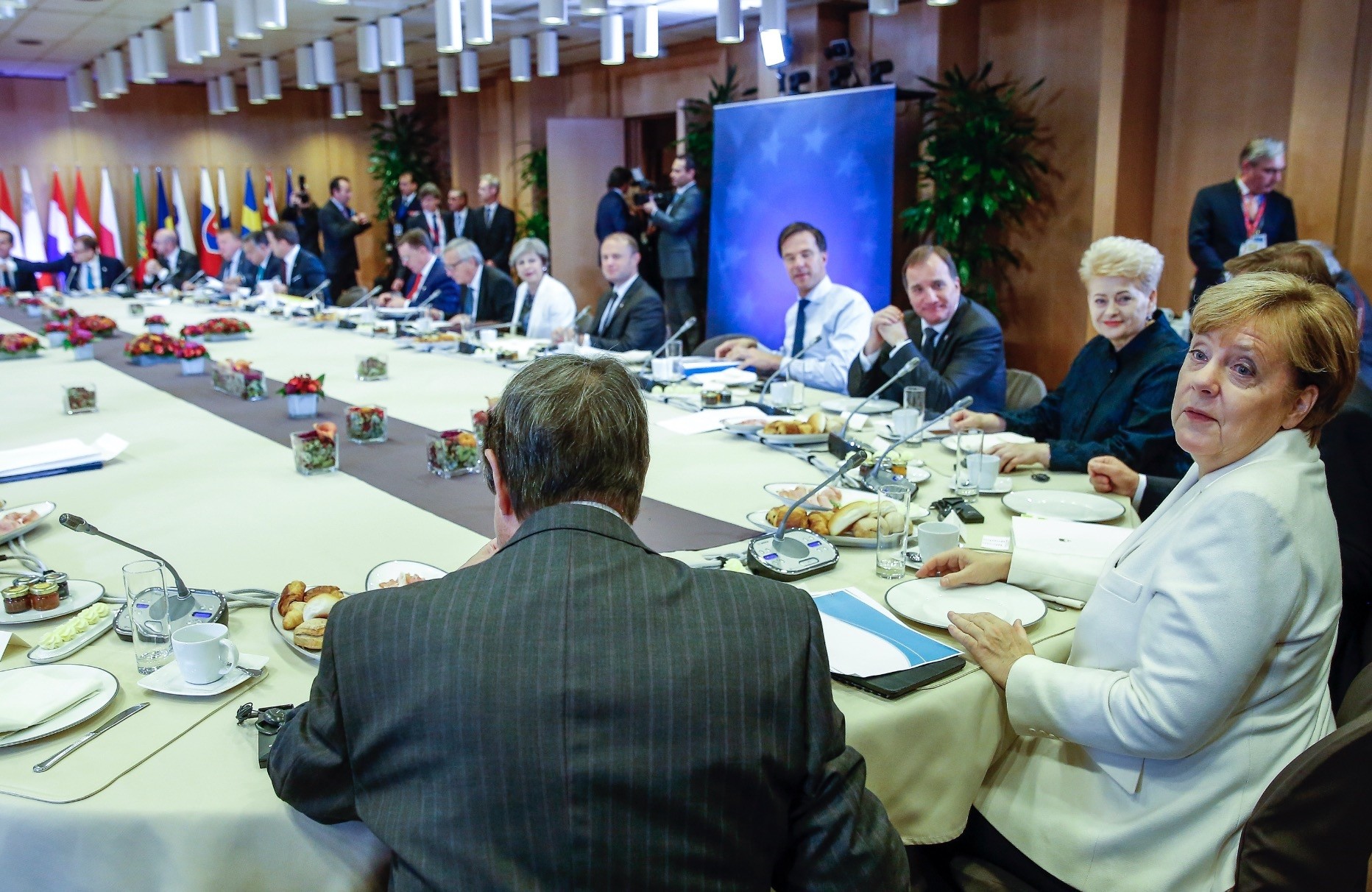 Angela Merkel and other EU leaders in a breakfast meeting at an EU summit in Brussels Oct. 20. The German Chancellor said there is no majority that makes a decision on an immediate end to the negotiations with Turkey.
by Compiled from Wire Services Oct 21, 2017 12:00 am

The EU softened its tone on Ankara at its recent leaders summit in Brussels, discussing the reduction of pre-accession funds in lieu of ending accession negotiations, although not all members were in favor of the switch

EU countries have backtracked from their harsh stance on Turkey, as some members shifted strategy and calls to halt pre-accession funds instead of ending accession talks with Ankara permanently. A noticeable change in Germany's stance on Turkey in particular was linked with leaving elections behind by some as German politicians who embraced a tougher tone during the campaign leading up to the Sept. 24 elections. Speaking at a key summit of EU leaders in Brussels, asked about her call for an end to Ankara's EU membership process during the campaign, German Chancellor Angela Merkel said: "We asked the [European] Commission to prepare an offer on reducing or redirecting EU pre-accession funds to Turkey. But, the next step must be communication with Turkey."

Merkel promised EU leaders during her re-election campaign last month to discuss ending accession talks with Ankara, a position she unexpectedly backed when her main rival took a hard line on the issue.

Commenting on the change of the EU's stance on Turkey, former member of European Parliament Ozan Ceyhun emphasized that the reason for significant change, particularly in Germany's attitude on Turkey cannot be confined to the elections alone, saying that Merkel's Christian Democratic Union (CDU) does not want to make serious moves before forming a new government.

He added that the likely scenario for a new government, which could include Merkel's conservative CDU/Christian Social Union in Bavaria (CSU) bloc, the Free Democratic Party (FDP) and the Greens, is also not expected to make considerable change to Germany's policy on Turkey such as favoring a permanent end to Ankara's accession talks. "The perceptible change in Germany's position after the election can inspire both Ankara and Berlin to repair relations have that have already deteriorated due to various reasons," he added.

Even though German social democrats and liberals backed immediately halting Ankara's EU membership talks and freezing 4 billion euros in pre-accession funds, a majority of EU member states, they now back dialogue with Ankara.

Stating that EU member states are in favor of dialogue with Turkey, Merkel said, "There is no majority that makes a decision on an immediate end to the negotiations."

Relations between Turkey, Germany and other EU states have been strained recently due to a number of reasons, including the latter's indifference to Turkey's fight against the PKK terrorist organization and Gülenist Terror Group (FETÖ), among others.

President Recep Tayyip Erdoğan has repeatedly said that more than 4,000 files regarding terrorism suspects have been sent to Germany, but that no step has been taken to finish examining the files and deporting the suspects to Turkey.

Turkey and the EU signed a refugee deal in March 2016, to discourage irregular migration over the Aegean Sea by taking stricter measures against human traffickers and improving the conditions of nearly 3 million Syrian refugees in Turkey.

The deal included a 6 billion euro aid package to help Turkey care for millions of refugees in the country.

The agreement also allowed for the acceleration of Turkey's EU membership bid and visa-free travel for Turkish nationals within the Schengen zone that comprises most EU states.

A year later, however, European Parliament approved a non-binding motion to freeze EU-membership talks with Ankara in response to post-coup investigations and recent developments in the country, including measures taken in the fight against the PKK and FETÖ.