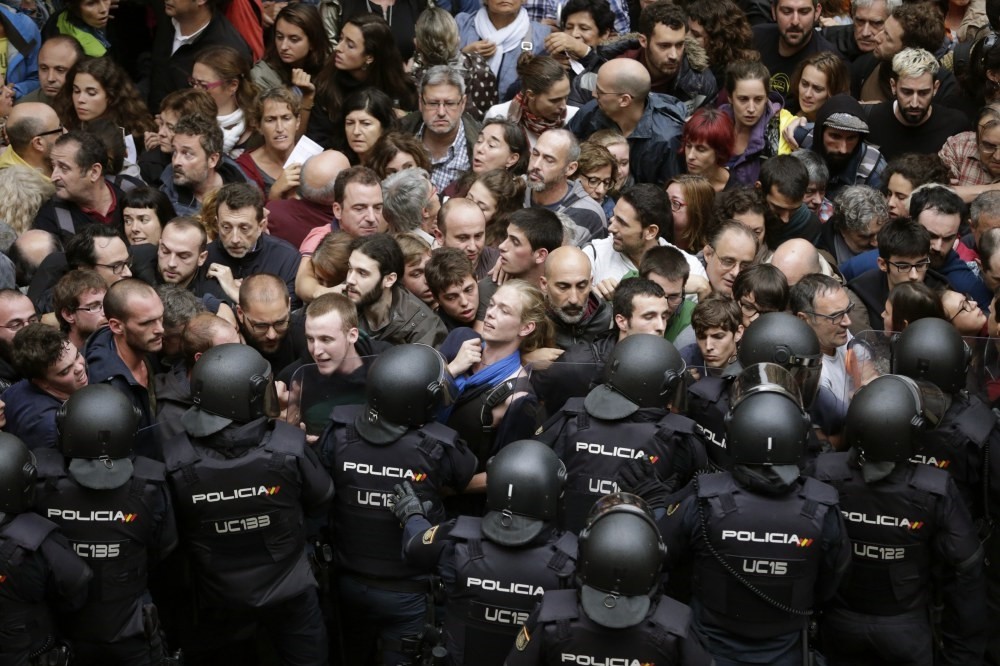 EU officials have said the arrest of Catalan ministers in Spain is a domestic judicial matter for the country, a move seen as depicting EU politicians' double standars, who had condemned when pro-PKK politicians were arrested in Turkey

Commenting on the arrest of Catalan ministers and Madrid's steps to request extradition of Catalonia's deposed President Carles Puigdemont, the European Commission said the matter is entirely up to the judicial authorities whose independence the EU fully respects. "We fully respect the constitutional order of Spain, and I have absolutely nothing to add to that well-established position," commission spokeswoman Annika Breidthardt told journalists in Brussels.

When told that the EU commented on arrests and detentions in Turkey and Venezuela, but is remaining quiet on the Catalan politicians' arrests, Breidthardt said: "I have absolutely nothing to add." When pro-PKK politicians from the Peoples' Democratic Party (HDP) were arrested, EU officials quickly released statements condemning the prosecutions. Ankara said these steps were "interference into the independent Turkish judiciary." On the day the HDP co-chairs were arrested, EU foreign policy chief Federica Mogherini said she was "extremely worried," and then European Parliament President Martin Schulz called the arrests a "blow to pluralism and democracy."

Furthermore, countless other statements were released by EU officials, who Ankara accuses of undermining Turkey's counterterrorism efforts by meeting with those who fought among PKK ranks and HDP officials who were captured on video delivering weapons to the terrorist group.

A judge in Madrid was set to issue an EU arrest warrant for Puigdemont over his region's tumultuous independence drive in a move likely to take tensions to a new level in Spain's worst political crisis in decades. No court ruling was reported when Daily Sabah went to print on Friday afternoon.

The much-expected warrant for Puigdemont, who is in Brussels, was expected a day after a Spanish judge threw a large chunk of Puigdemont's axed regional government behind bars over their role in Catalonia's push for independence.

Madrid last week dismissed Puigdemont as Catalan president. He failed to show up in court on Thursday to be grilled by a judge over alleged sedition, rebellion and misuse of public funds, which are accusations that he calls politically motivated.

The jailing of former Catalan government officials set off a new round of protests back in Catalonia. Several thousand people gathered on Thursday night in the main city of Barcelona and other towns to call for their release.

Judge Carmen Lamela, who had Catalan Vice President Oriol Junqueras and seven other deposed regional ministers detained pending a potential trial, had reportedly already issued the arrest warrant but had not released it.

Puigdemont's Belgian lawyer Paul Bekaert, who in the past has helped Basque separatist militants challenge Spanish extradition requests, told Flemish television channel VRT that his client would appeal the move. Bakaert is also the former lawyer of Revolutionary People's Liberation Party-Front (DHKP-C) terrorist Fehriye Erdal, who was involved in the killing of prominent Turkish businessman Özdemir Sabancı in 1996. Puigdemont said on Catalan TV from an undisclosed location that the situation "is no longer an internal Spanish affair" and called on the international community to wake up to the "danger."

The Catalan declaration of independence was roundly spurned across Europe, with Germany, France and Britain rejecting it and EU institutions sticking to their support for the government of Spanish Prime Minister Mariano Rajoy.

European Commission President Jean-Claude Juncker warned after the declaration of independence that the 28-member bloc "doesn't need any more cracks [or] more splits" and that he does not want the EU "to consist of 95 member states."

Berlin on Friday expressed its full support for Madrid following the detention of eight former Catalan ministers for their roles in the region's independence drive. "From the federal government's point of view, Spain is of course a state governed by the rule of law and as government spokesman, I see no reason at all to comment on decisions made by Spanish courts," Steffen Seibert told reporters. "We continue to support the clear position of the Spanish prime minister," Seibert said. "What's important to us is that the unity and constitutional order of Spain are maintained."