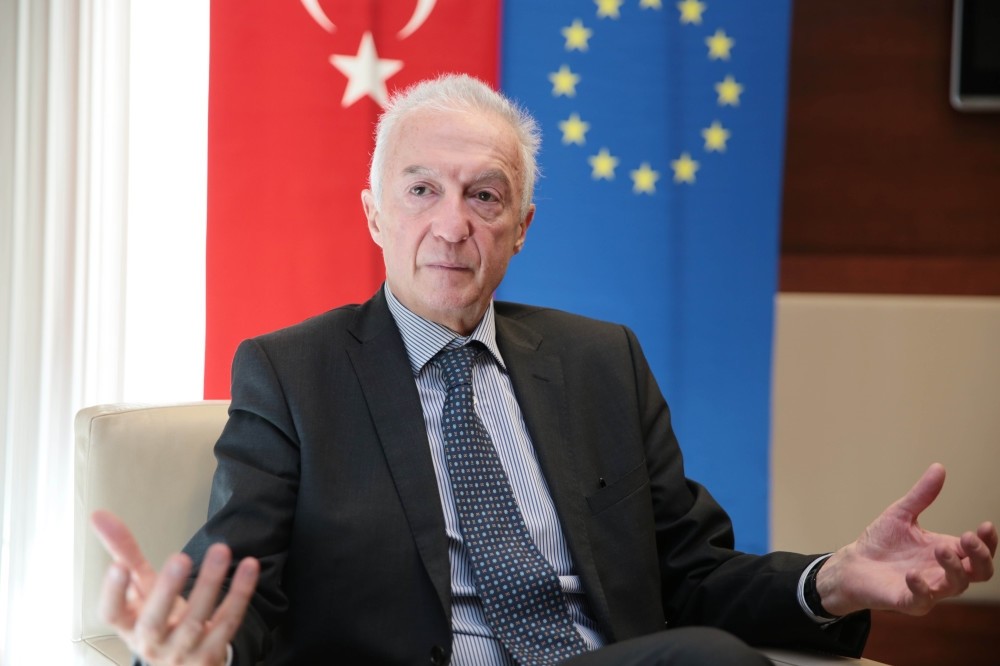 Gilles de Kerchove said it was a good sign that the EU and Turkey want to deepen cooperation.
by Ali Ünal Nov 30, 2017 12:00 am

Turkey and the EU need each other's support since both deal with the same threats, said EU counterterrorism coordinator Gilles de Kerchove, and urged both sides to strengthen their partnership

As Daesh loses ground in Iraq and Syria and the return of terrorist fighters from Europe becomes a major concern, the EU cited Turkey's significant role in counterterrorism once again and sent its coordinator, Gilles de Kerchove, to Ankara to find common ground. "The main objective of this meeting is to explore all concrete steps that we can undertake between Turkey and the EU," Kerchove told Daily Sabah in Ankara on Nov. 28, after meetings with Turkish officials. "We wish to reinforce this partnership because we face the same common threat, and we need each other not only on terrorism, but on security as whole. Both sides wanting to deepen cooperation is a good sign."

To enhance counterterrorism cooperation with the EU, Turkish police and Europol signed a liaison agreement in 2016, and now the country is looking to sign an operational cooperation agreement with Europol. Nevertheless, the EU is not signing this agreement due to issues with data protection legislation in Turkey. "The European Commission believes Turkey needs to slightly amend its legislation on data protection, especially on a specific point, which is the independency of the Turkish Data Protection Authority, and then we can sign an operational cooperation agreement," Kerchove said.

While European Parliament is taking a step to prevent PKK symbols, the fight against the PKK is not always satisfactory in Europe. For instance, in September, a Belgian appeals court confirmed a ruling that suspects and institutions linked to PKK terrorists cannot be investigated and tried within the scope of anti-terrorism laws. Immediately afterward, Turkish officials slammed the Belgian court's decision to reject a legal objection to an earlier ruling that said PKK activities in Europe could not be classified as terrorism, saying the court battle over the arrest of terrorists has not ended yet. Commenting, Kerchove said that the EU lists the PKK as a terrorist organization, adding that he cannot comment on a particular court decision. "Turkey is a party to this case as I understand, and it's up to the Turkish government to provide evidence to the court. But I can assure you that there is no group in the EU that tries to legitimize the PKK," he said

In Turkey's fight against terrorism, the country also has to deal with the uncooperativeness from some EU countries. Last October, the Foreign Ministry criticized Danish authorities for refusing to extradite a suspect linked to the Daesh terrorist attack that killed 39 people in Istanbul on New Year's Eve last year, saying that Denmark's release of Ibrohimjon Asparov and refusal to extradite him for links to the deadly attack is a clear violation of the 2014 U.N. Security Council Resolution no 2178. Responding to the question of whether Turkey's extradition requests have a basis for their European allies, Kerchove said that better communication is key to solving this problem. "In some cases, Turkey believes that denial of the extradition request is not fair. … The best way to overcome this problem is to sit together and look at why extradition requests are denied and find an answer to the question of how we can improve the quality of the request."

In addition to other terrorist organizations, Turkey has also been fighting the Gülenist Terror Group (FETÖ), which was behind last year's failed July 15 coup attempt. However, FETÖ is not on the EU's terrorist organization list. Turkish officials say the EU is unwilling to cooperate to fight FETÖ, which was responsible for the deaths of 249 people during the coup attempt. Responding to a question about whether the EU does its best in terms of sympathizing with Turkish counterparts on FETÖ, Kerchove said that substantial evidence and concrete conviction decisions would help further cooperation. "The EU does not see FETÖ as a terrorist organization yet, so legislation on counterterrorism does not apply to FETÖ," he said. "We listened carefully to the Turkish side, and we are ready to listen even more. The more Turkey comes with hard facts and substantial evidence the better."

During his stay in Ankara, the EU delegation led by Kerchove met with officials from the Foreign Ministry, National Intelligence Organization (MİT) chief Hakan Fidan and presidential spokesman İbrahim Kalın. Following the visit, the Foreign Ministry and the EU issued a joint statement about the visit. According to the statement, both sides agreed to explore ways of enhancing collaboration on information sharing, law enforcement and judicial cooperation and countering the financing of terrorism, among other topics. "The EU and Turkey will continue to work together to contribute to counterterrorism efforts in international forums such as the United Nations, the Financial Action Task Force (FATF), the Global Counterterrorism Forum (GCTF) and the Global Coalition to Counter Daesh," the statement said.