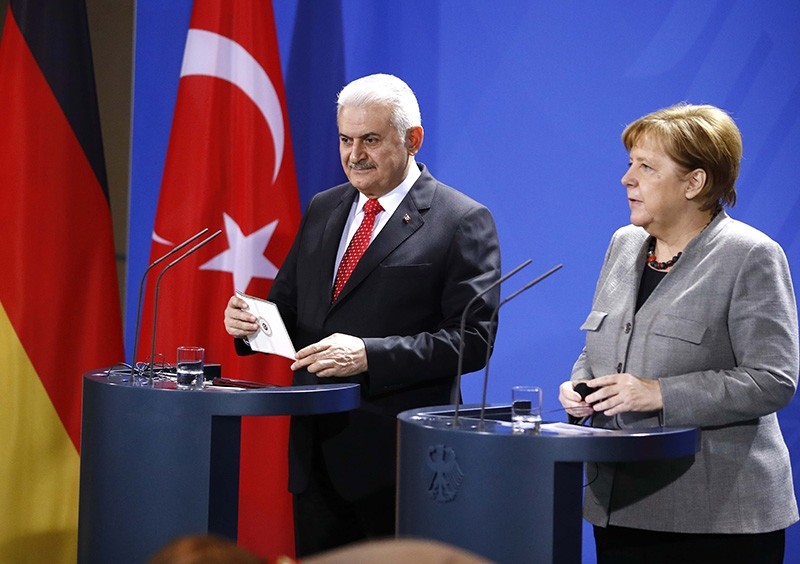 Turkish Prime Minister Binali Yıldırım and German Chancellor Angela Merkel met Thursday in Berlin as the two leaders voiced their desire to restore friendlier relations after more than a year of tension.

Speaking during a news conference following the leaders' meeting, Merkel emphasized the common interests Turkey and Germany share in the midst of a difficult phase but added that there were still obstacles remaining on the way to normalizing relations, including the detention of German-Turkish journalist Deniz Yücel.

The German leader also thanked Turkish efforts to shelter more than 3 million Syrian refugees and said that "the EU funding for Syrian refugees should be paid to Turkey as soon as possible."

Yıldırım, commenting on the upcoming transition within the German government, said: "Turkey and Germany will continue its bilateral relations at full capacity after German coalition government takes power."

"I expect there will be a development soon in Deniz Yücel's case," added Yıldırım, referring to a case that has caused tension between the two countries.

"We do not want such problems to overshadow our ties."

Yücel is a Turkish-German journalist who was detained in Turkey on charges of being involved in terrorist activities and is currently held in pre-trial detention. Germany has requested Turkey expedite the trial proceedings to produce a verdict as soon as possible.

Yıldırım also warned a reporter at the news conference not to make propaganda for PKK-linked People's Protection Units (YPG) after he showed fake images of the Turkish operation in northwestern Syria that had been shared by terrorist sympathizers on social media.

The two countries have recently entered an era of fixing marred ties. The efforts of the foreign ministers of the two countries played a key role in the normalization process. While Foreign Minister Mevlüt Çavuşoğlu hosted his counterpart Sigmar Gabriel in October in Antalya, Gabriel hosted Çavuşoğlu in Germany's Goslar city to drink tea together in Turkish style.

Additionally, President Recep Tayyip Erdoğan has expressed intent to invite Merkel to Turkey or travel to Germany once the German government is formed.